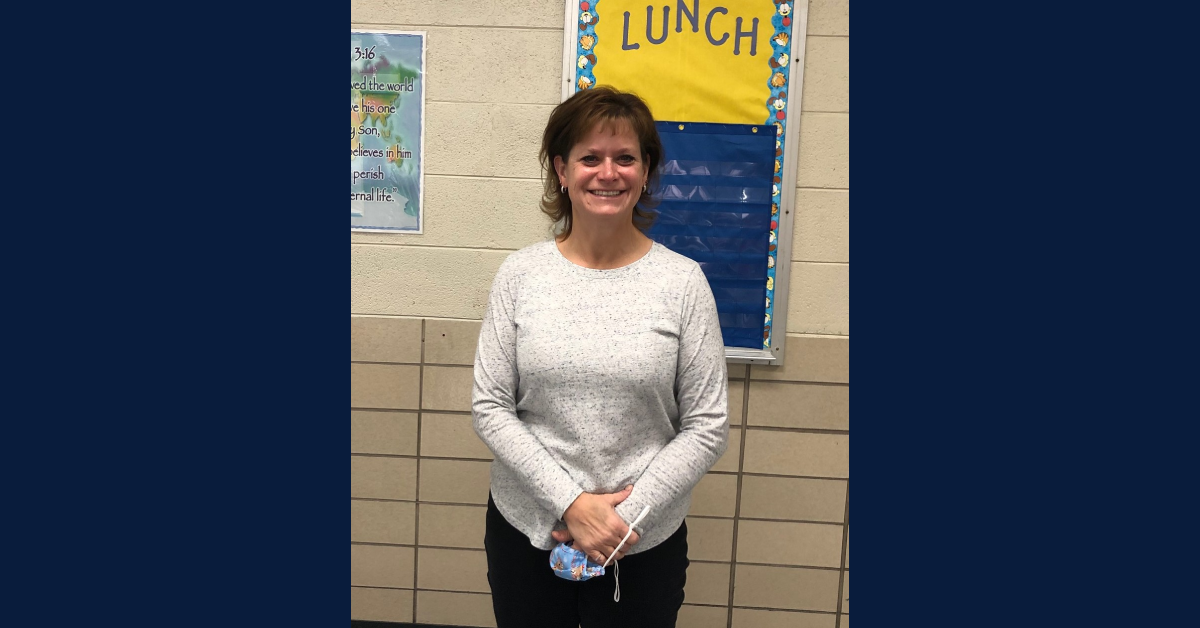 Student, parent, teacher....These are all titles that describe Mrs. Jenny Horn’s role at Saint Mary Catholic Community School.  Catholic education has been a part of teacher Jenny Horn’s life since she was six years old.  She attended Saint Mary’s School from first grade through eighth grade, graduating in May of 1985.  After eighth grade, Jenny attended Andrean High School and then went on to major in education at Saint Joseph’s College in Rensselaer.  She is currently one of the sixth-grade teachers, but she has taught both fourth and fifth grades as well. Jenny heard about a teaching opportunity at St. Mary’s when she was deciding where to send resumes.  She said that she was actually interviewed on Easter Sunday for a teaching position and was offered the job that following week.  She has been at Saint Mary’s ever since.  She summed up by saying, “I was so excited to return to my alma mater to teach.”

St. Mary’s was very different when Mrs. Horn was a student.  The parking lot that is presently next to the church was once a very large, three story school building.  This is where the first through fifth grade classrooms were located; there wasn’t a Preschool or Kindergarten at that time.  Jenny ate lunch (that she brought from home) in her classroom every day. She had a “hamburger day” and “hotdog day” once a month and said that it was a big treat.

Jenny said that there are so many wonderful memories that she has from school, but one of her absolute favorites is when the first through fifth grade would all gather in the “old” school building during Advent and have a Jesse Tree prayer service.  Each class would decorate an ornament that went with the reading/story of the day and place it on the tree.  The fourth and fifth graders would sit on the stairs and the first through third graders would sit in the hallway.  They would sing songs and say prayers together.  Another favorite memory relates to sacraments. When students received any sacrament, they got homemade cards or crafts from other classes.  Jenny still has all of hers.

Jenny was not able to choose only one favorite teacher, but she said that she had several favorite teachers while at Saint Mary’s.  Miss Flynn, Mrs. Elinkowski, and Mrs. Schmal were her top three favorites. She went on to say that “they all have their own special qualities that have left such a great impact on me.  They are also responsible for making me want to be a teacher.”

Jenny still maintains contact with several of her Saint Mary’s classmates.  In fact, she has quite a few friends that she still talks to that attended St. Mary’s with her and has even taught some of her friend’s children here at school.

Both of Jenny’s daughters graduated from Saint Mary’s.  Jenny said, “When it was time for my daughters to start school, my husband and I did not hesitate in the least to send them to St. Mary’s.  The education they received truly prepared them for high school.   My oldest is a senior in college and my youngest is a freshman in college.  They both have outstanding study skills, work ethic, and many outstanding academic achievements.  My husband, who attended public school his whole life, always credits their amazing success in academics and beyond to the excellent education they received from St. Mary’s.”

Jenny mentioned some fun facts about St. Mary’s school.  She sat upstairs in church at all-school masses when she was in fourth grade.  Singing songs in church was one of her fondest memories.  Jenny said, “I loved that!”

When asked how Saint Mary’s shaped her life, Jenny replied “The high standards and expectations for students at Saint Mary’s really prepared me for high school and beyond.  Knowing that I had teachers that really cared about my education, as well as, cared about me as a person truly helped too.  My faith-based education I received at Saint Mary’s was a great foundation that helped me grow as a person who believes that God will always be involved in every aspect of my life.”

Jenny summed everything up by saying, “If I had to describe St. Mary’s with just one word, it would be FAMILY.  This word applies to all my roles at St.Mary’s- student, parent, and teacher.  St. Mary’s will always hold a special place in my heart.”