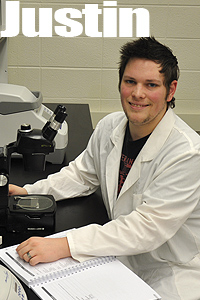 “I want to eventually own my own veterinary practice and bring an emergency vet clinic to an area that needs it,” he said.

The Purdue University College of Veterinary Medicine is considered one of the top veterinary schools in the nation. Top students from across the county apply to the extremely competitive program. There were 667 applicants for admission to the Class of 2018 and Knoll was one of only 84 students enrolling.

Knoll, of LaPorte, has been interested in animals for most of his life. As a 10-year 4-H member, he explained “My interest in veterinary medicine was not developed in 4-H, but 4-H furthered my interest.”

“I learned so much during 10 years of 4-H. It became a very important aspect of my life. I learned a great deal about animals,” he continued. “But some of the most important knowledge I gained was in leadership. That is one of the things that 4-H is the best at – teaching.”

As a PNC student, Knoll balanced being a full-time student earning top grades with working 20 hours or more a week and making time for friends and outside activities.

“It’s just learning to properly manage your time so that you don’t ignore the important aspects of your life,” Knoll said.

While he devoted many hours to class and homework, he pursued other interests as well.

Knoll was an Eagle Scout and was named Scout of the Year in Indiana and placed second in the nation. Scouting played a major role in his life growing up.

“The thing I enjoyed about being part of the Boy Scouts of America was the opportunity to do something different. I’ve hiked more than 50 miles of the Smokey Mountains, went caving in southern Indiana and canoed more than 50 miles in northern Minnesota. That’s the short list. It is important to experience as much as you can in life and Scouts helped with that. It was also helpful in learning organization and other life skills.”

On-campus he explored another of his interests – comedy – as a member of the Ranting Llamas Improv Troupe.

“I loved working with them during the past three years,” he said. “They are some of my best friends on campus and like a second family to me. I will always treasure my time with them. I will keep in touch with them. The friends I made at PNC will be my friends for life.”

His interest in improv comedy started in high school, so it was natural for him to continue it at PNC.

“It’s fun. I love to make people laugh and smile. Getting someone to smile or laugh and forget their troubles for a little bit is very rewarding. The world is a stressful place, but smiling, making a joke and laughing can help make your day better. Never forget to have fun. We spend so much time being serious that we forget to smile. I always say, what is the point in growing old if you can’t be a little bit childish sometimes? Being an adult doesn’t mean you have to be a stick in the mud.”

He also advised others to make time for a hobby, “A good hobby can help you unwind. My hobby is art and when I start to feel too stressed, I take a break and draw or make something. It helps out a lot.”

As Knoll reflected on his PNC education, he thanked his professors, noting, “The professors here are some of the best I have ever met. Their love of science and enthusiasm were an inspiration to me and made learning fun. They care about you and they know you by name. At PNC, you aren’t just a face, or a number. You are a person. The education you get at PNC is fantastic.”

But as a committed student he was quick to note, “You get out what you put in. If you don’t put in a lot of effort, you are not going to get a lot out of your education. If you do the work and ask for help when you need it, you will succeed. Don’t be afraid to talk to your teachers. There is nothing wrong with asking for help when you don’t understand something, and if anything, seeking out help shows you that you want to learn.”