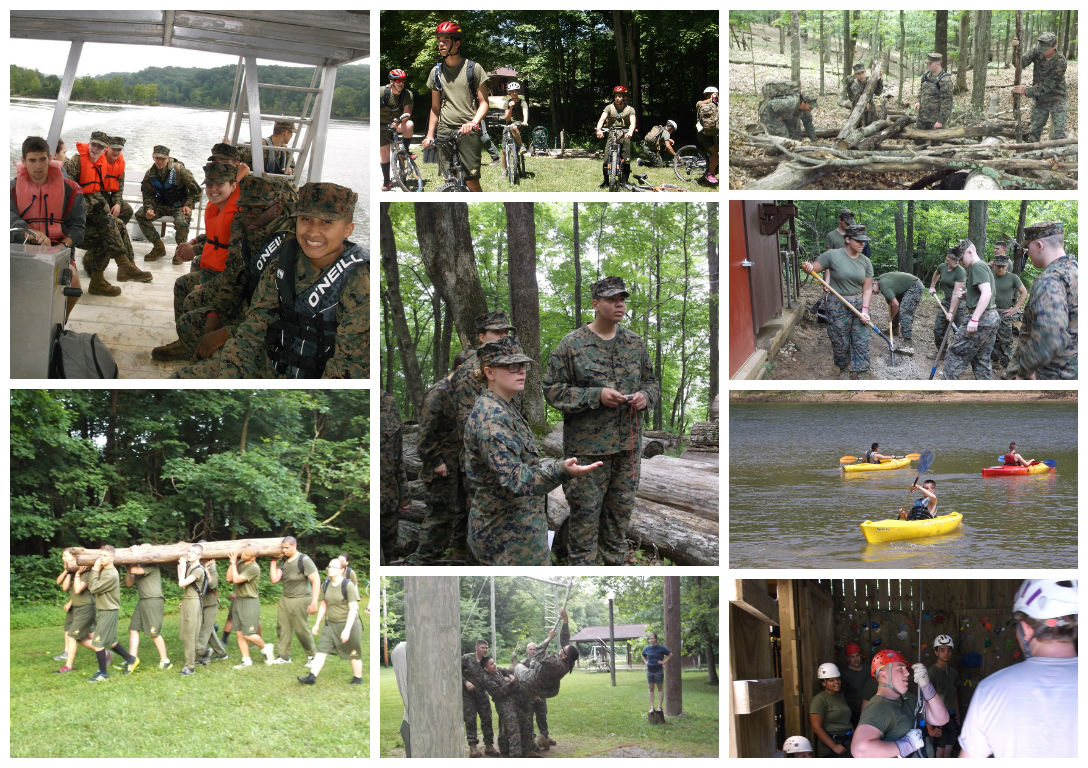 Twenty five cadets from the Michigan City High School (MCHS) Marine Corps Junior Reserve Officer Training Corps (MCJROTC) participated in a basic leadership camp at the Ransburg Boy Scout Reservation in Bloomington, IN from June 9th to June 14th. The purpose of the camp was to provide leadership opportunities for cadets in a field environment. Among the activities the cadets conducted were archery, shooting, horseback riding, wilderness survival, canoeing/kayaking, rappelling/wall climbing, mountain biking, and a leadership reaction course. Cadets also did service projects to help the camp staff. The camp was conducted at no cost to Michigan City Area Schools or the cadets. It was funded primarily by the U.S. Marine Corps, and augmented through fundraising.

Master Sergeant Jeff Benak, the Marine Instructor, stated that the cadets worked well to responding to the challenges that the camp provided. “This camp really tired our cadets out, as they were going from before sunrise with physical training to after sunset with leadership activities. All of our cadets preserved and pushed themselves much farther than they thought they could go if we were back at the school,” he said.

Major Tom McGrath, the Senior Marine Instructor, noted how many cadets improved their leadership skills from the beginning of the week to the end. “By giving many cadets the opportunity to lead, not just the senior cadets, a great deal of self-confidence was achieved by just about every cadet,” he said.

Most cadets echoed the feelings of their instructors. “This really tired me out,” said Cadet Captain Cody Joseph. “But I feel a whole lot better for having gone through this camp, having pushed myself and the other cadets.”

Cadet Captain Alex Wyman had similar thoughts. “I am hoping to attend Purdue University on an ROTC scholarship. This type of experience is what I need to prepare myself to be able to preserve under physically and mentally challenging conditions.”

This was the first of three camps cadets will attend this summer. Selected cadets will attend a Senior Leadership Camp at the end of June and a Science, Technology, Mathematics, and Engineering (STEM) Camp in July. Both camps will not cost the school district or cadets anything. Cadets will also be doing numerous community service projects this summer, such as the Route 421/Route 6 clean-up on June 20th. They will also be participating in numerous parades and ceremonies. Three of those will be the Independence Day Ceremony in Michigan City, the 4th of July Parade in LaPorte, and the Michigan City Summer Festival Parade on July 5th.