Sister M. Elise Kriss to Retire as President of the University of Saint Francis in June 2020 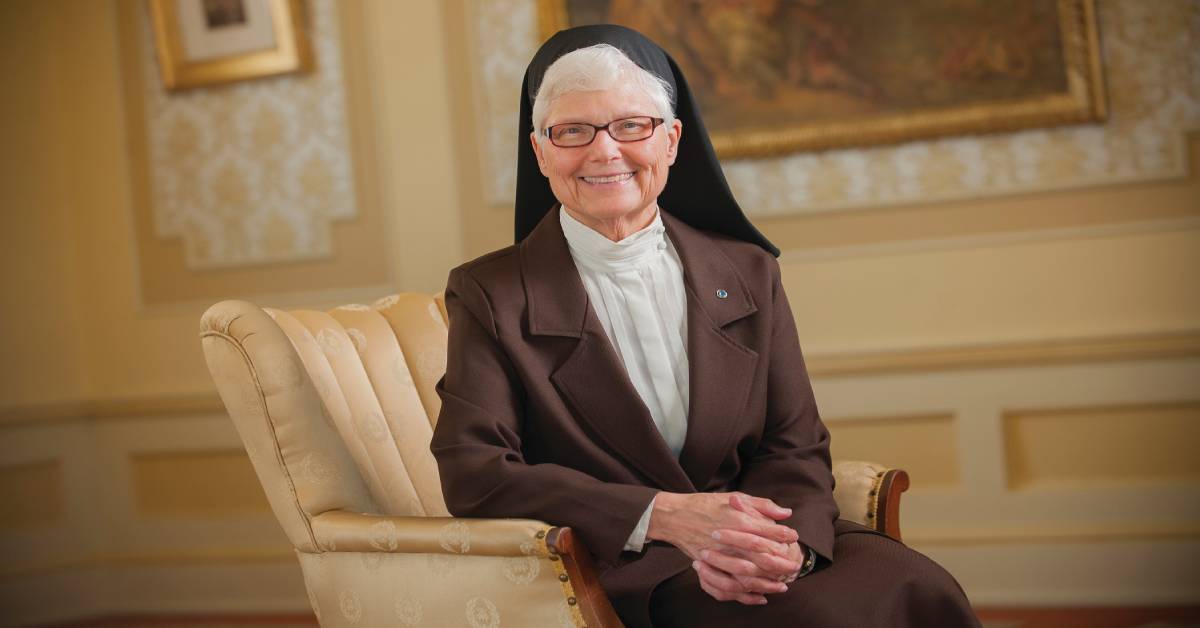 July 25, 2019 FORT WAYNE, Ind. – University of Saint Francis President Sister M. Elise Kriss, OSF, has announced she will conclude her presidency on June 30, 2020. She will complete her 27th year.

Sister Elise shared her retirement plan with the USF Board of Trustees on Wednesday.

“Since July 1993, I have been privileged to serve this wonderful university by working with the board, the campus community and the Fort Wayne community during an era of tremendous change and growth,” USF President Sister M. Elise Kriss said. “We have collaborated on projects both large and small. We’ve teamed to cultivate growth in our academic programs, in athletics and the arts, and in the addition of many new academic and related facilities that have strengthened the university, allowing it to meet the needs of today’s students. During this time, we have not only remained faithful, but we have deepened the impact of our Catholic and Franciscan mission and values.

“In my final year as president, I look forward to working with the board and the campus community to begin to implement the new strategic plan to set the best possible groundwork for the university and its future leadership. I also look forward to working with the entire campus community—board, faculty, staff, and students—on all the usual events of the upcoming academic year.”

Sister M. Angela Mellady, Provincial Superior of the Sisters of St. Francis of Perpetual Adoration, who sponsor the university, expressed her gratitude to Sister Elise for “her tireless efforts leading the university over these 27 years.”

Bill Niezer, USF Chairman of the Board of Trustees, praised Sister Elise for her vast contributions to the university.

“Sister Elise has provided tremendous leadership during her tenure as president,” Niezer said. “The contributions to the growth and success of the institution are truly amazing. She is always true to the mission of USF. Her influence upon the university will remain long after her retirement. It has been a privilege to have had the opportunity to work with her over the past years. Sister Elise will most certainly be missed by the entire university community.”

Among the highlights of President Sister M. Elise Kriss’ tenure at the University of Saint Francis:

The founding Congregation, the Sisters of St. Francis of Perpetual Adoration, is intent on continuing this important ministry of higher education in the name of the Catholic Church. The Provincial leadership, working closely with the USF Board of Trustees, will prayerfully appoint the next president, who will build upon the legacy of Sister Elise and all those Sisters who have served at the University of Saint Francis since its founding in 1890.

Founded in 1890 in the Catholic Franciscan tradition, the University of Saint Francis offers more than 70 undergraduate, graduate and doctoral programs through the School of Health Sciences, School of Liberal Arts and Sciences, Keith Busse School of Business and Entrepreneurial Leadership and School of Creative Arts. In addition to its traditional programs, USF designs focused curricula for working adults in Fort Wayne, Crown Point and online. USF Downtown houses the university’s business and music technology programs while offering enhanced internship and networking opportunities for students. The University of Saint Francis campus experience includes 18 athletic programs boasting two individual and four team NAIA national championships, and is recognized as an NAIA Five-Star Champion of Character institution. Approximately 2,200 students from a broad geographic region attend USF.