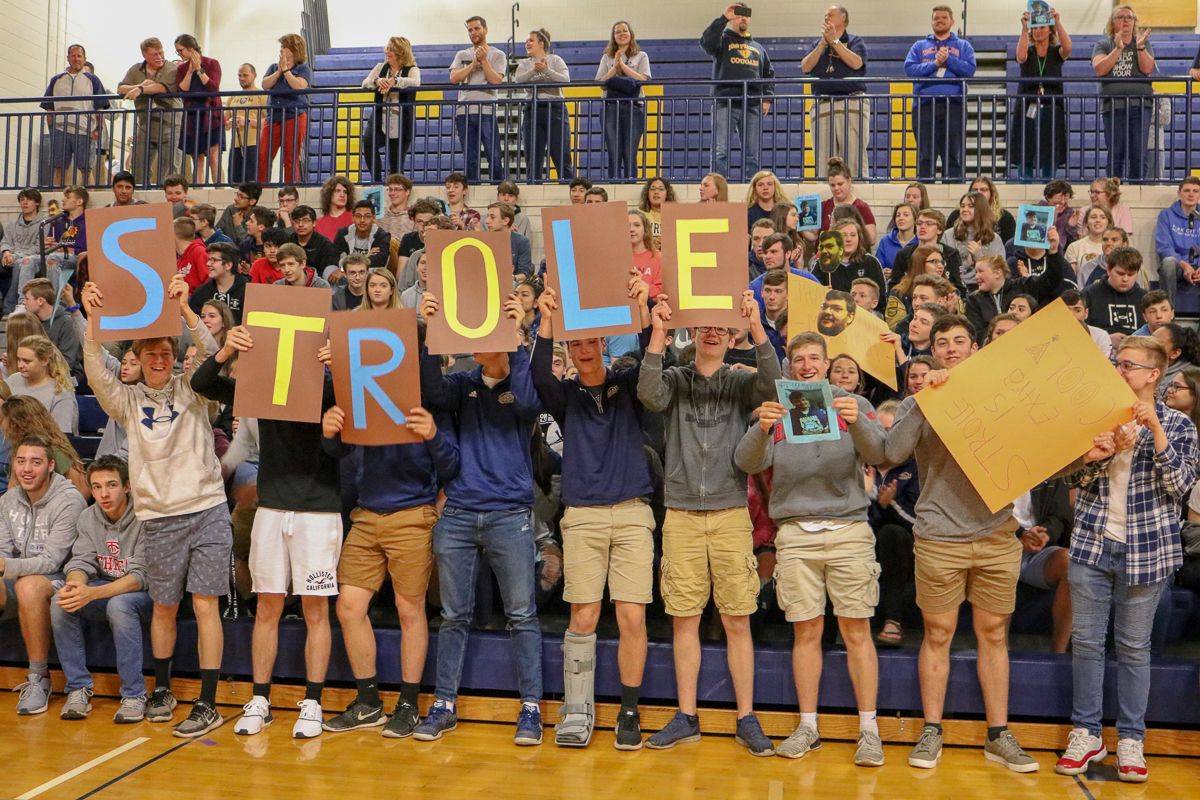 Teaching can be a thankless job. The position comes with long hours and often little appreciation for the amount of work good education requires.

But not so for Ben Strole, math teacher and softball coach at New Prairie High School. The entire school community gathered in the gym on Wednesday morning to show Strole just how much his kindness and dedication meant to them.

Junior Quinlan Eggert, one of the rally’s student organizers and a member of the softball team Strole helps coach, talked about how much Strole supports students on the field and in the classroom.

“If I ever have any issues or any questions, he’s always there to help or direct me to someone who can give me help for whatever I need,” Eggert said. “He’s done so much for us, I think it’s important to do something nice for him.”

As students filed in, many wearing t-shirts with Strole’s beaming face on the front, the school band played fanfare. Classmates held letters spelling out his name alongside images of his face, and signs that thanked him for all he’d done.

Following a brief speech listing his numerous contributions, Strole was crowned in the center of the basketball court and the crowd erupted in cheers around him. A student organizer handed him a scepter decorated in the school’s colors, blue and gold. Another placed a cape made from a Purdue flag, his alma mater, around his shoulders.

Then the lights dimmed and a student-made video tribute started playing. The subject watched from his folding-chair-throne, fighting back tears.

After the ceremony, the honored purveyor of geometry and pre-calculus said he was touched by the gesture.

“It felt great,” Strole said. “I think it always feels nice to be appreciated by the people around you. You don’t need it everyday, but every once in awhile it’s nice to have a reminder that, ‘Hey, you’re doing a fairly good job.’”

Though surprised by the announcement, Strole admitted he was a little suspicious something might be afoot.

“Some people were awkwardly quiet,” he said. “I think they were just afraid that they were gonna tell me by accident.”

Strole was recognized as part of a national campaign called, “dude. be nice,” that encourages communities to celebrate their positive influencers.

New Prairie English teacher Kortney Brennan helped organize the pep rally. She and a group of student senate representatives brought the idea back from a leadership conference they attended. “There’s a lot of unsung heroes and they work hard and give a lot of themselves,” Brennan said. “They need to be appreciated and shown that we appreciate them.”

To choose this year’s honoree, students were invited to nominate anyone they felt had made a positive impact on the New Prairie High School community, Brennan explained. The list of nominees was narrowed down to three names and students then voted for their favorite.

During the festivities, a group of students secretly decorated Strole’s classroom with Purdue-colored streamers and dropped off Purdue-colored cupcakes topped with little softballs. A couple stuck around to get his autograph on their Strole t-shirts.

Eventually they all drifted off to lunch, leaving their teacher with the best gift of all– a few moments of peace and silence, surrounded by momentos of his students’ gratitude.