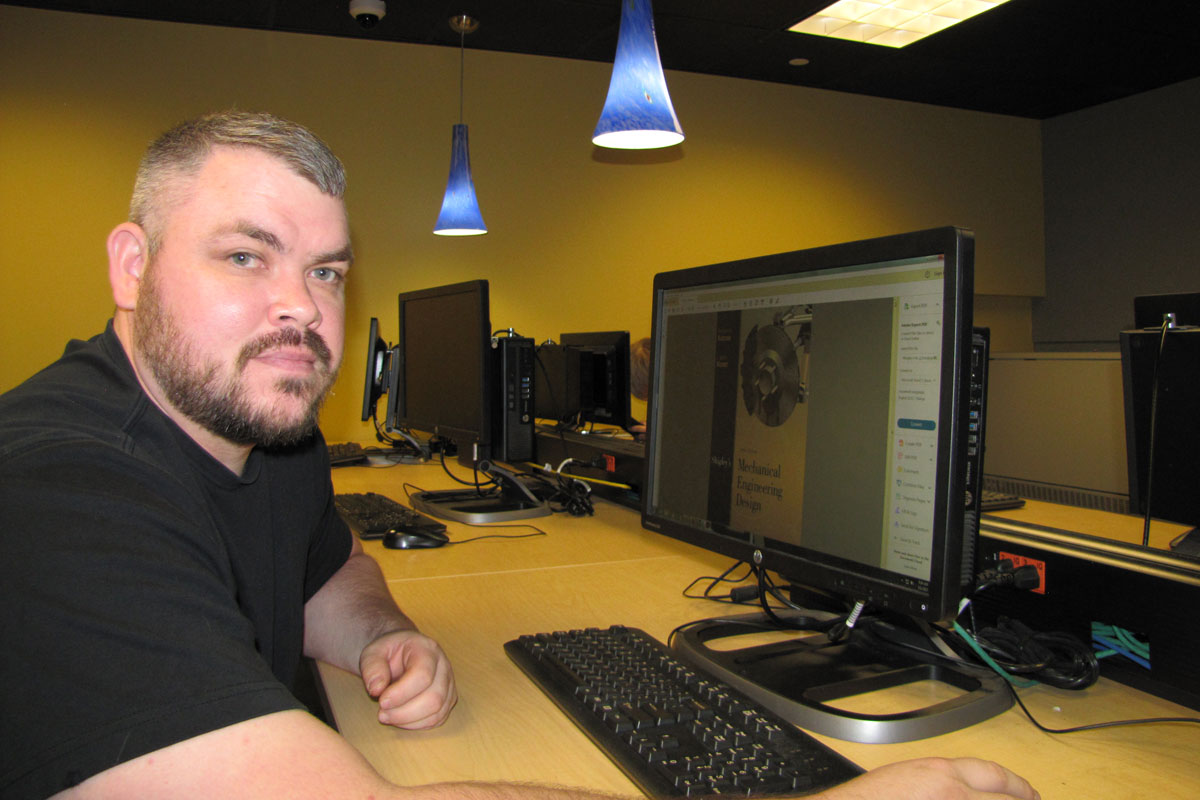 When Eric Garner returned home from four years of military service in 2010, including three deployments into combat zones, he was eager to distance himself from the ugliness of war and transition into a more satisfying chapter of life with help from a college education.

The Hobart resident enrolled at what is now Purdue University Northwest, because “it was convenient and affordable,” he said. Years later, he also would acknowledge satisfaction about the quality of education he has received there in mechanical engineering, from which he will graduate with a baccalaureate degree Saturday (3 p.m., 5/6).

Despite admitting “not being the best of high school students,” he was determined to pursue and succeed at engineering after walking into a local library one day, pulling a calculus book from a shelf, perusing it and concluding, “if someday I can understand what’s on these pages, I can be successful.”

Chalk up such bold, ambitious thinking in part to the experience and determination his military years of combat provided him.

Deployed to Iraq, Afghanistan
Less than three months after graduating from Hobart High School in 2006, he became a U.S. Marine. Eventually, he would be deployed to two of the world’s hot beds of international conflict—Iraq and Afghanistan—where as an infantryman and team leader his missions were matters of life and death.

“My job was to find the enemy, the Taliban, and kill them,” he said. “The first time you kill someone, it affects you, but eventually you don’t look at it as killing people, but shooting targets. I gained a pretty extreme perspective of life; we live in a very cruel world. When I came home, I looked at things differently.”

Back home in northwest Indiana, far removed from military conflicts against a hardline Sunni Islamic fundamentalist political movement, Garner immersed himself in a new challenge. He took advantage of GI Bill financial support to enroll at Purdue Northwest.

New way of life
“I just wanted to lose myself in a new way of life, and I was able to do that studying mechanical engineering,” he said.

According to one of his professors, Harvey Abramowitz, “When I think of a few words that describe Eric’s attitude, they are these: ‘We have a job to do, let’s focus on how to do it, and let’s get it done.’ Most likely, that can-do attitude is something a Marine is taught. What I do know is that is the way he goes about his business.”

After halting his education briefly two years ago to clarify his goals and purpose, Garner returned to PNW, attacked his studies with a vengeance, got involved with a team of classmates who have been fabricating a solar-powered vehicle and now looks forward to his future.

“I’ve had a good experience here; I like the campus, and I’ve had a lot of good professors, though I’m not one to go to their offices and seek help; I prefer to learn the material and figure things out myself,” he said. “It’s about work ethic—how much work you’re willing to put in to accomplish something.”

Character, judgment, perseverance
Assistant Professor of Mechanical Engineering Hansung Kim, faculty advisor of the solar-powered vehicle project to which Garner has contributed, said, “There have been several up-and-down moments with our project. But Eric’s enduring character and decisive judgments have greatly contributed to the project’s overall successful progress.”

“What the military did was give me a gauge for working hard and pushing myself when I was physically tired,” he said. “While in school here, I’ve learned how to push myself when I’ve been mentally tired. Through both, you learn how to persevere.”

Sharing in his graduation day celebration will be his parents, sister and brother-in-law. And applauding from a distance may be a few others.

“I definitely was not a model student growing up,” he said. “If my high school teachers knew I was graduating with a Purdue degree in mechanical engineering, they wouldn’t believe it.”