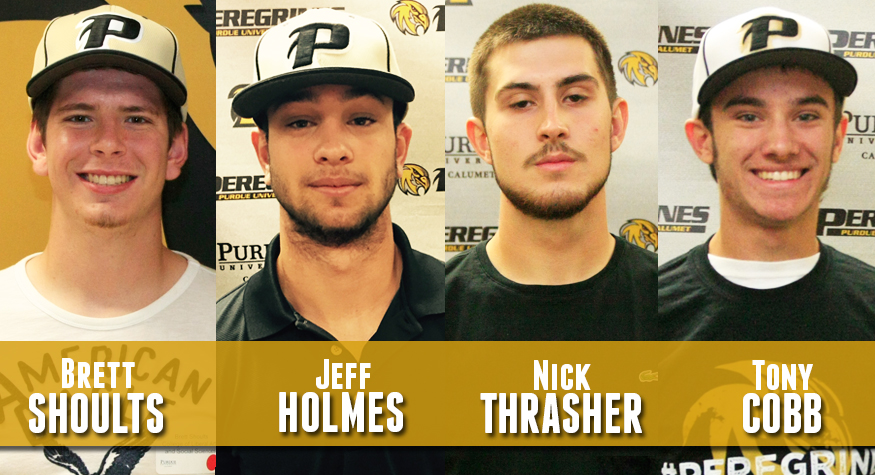 Holmes (Valparaiso, Ind./Valparaiso) comes to Purdue Calumet after a season at NJCAA member Century College (Minn.), where he received the Theta Kapa Scholarship, given to students with above a 3.5 grade point average. Prior to his time at Century, the outfielder played a season at Oakton Community College (Ill.) after a prep career at Valparaiso High under coach David Coyle.

"Jeff can play outfield or second base, and he's a hard worker -- he's a gritty player with those intangibles you can't teach," Griffin said of Holmes. "He's a hard-nosed player who will compete for an outfield position, where he brings much-needed experience."

Holmes marks the second player in his immediate family to play college baseball -- his father, Tim, pitched at Valparaiso University.

Thrasher (Whiting, Ind./Bishop Noll), a pitcher and outfielder, was a four-year letter winner for the Bishop Noll Warriors, where he also played quarterback for the football team and competed on the basketball team.

"Nick is a good athlete who will compete for pitching innings and outfield work," Griffin said. "He's a guy who plays with a lot of passion."

The son of Scott and Tracy Thrasher, Nick plans to major in finance at Purdue Calumet.

Cobb (Highland, Ind./Bishop Noll), an infielder, was a three-year letter winner for the Warriors, where he was a teammate of Thrasher's. He was named to the All-Greater South Shore Conference first team earned his squad's Most Valuable Player award his senior season.

"Tony will give us some infield depth at shortstop," Griffin said of Cobb. "He's a good defensive player, he has good speed, and he will come in and compete for a backup position in the middle infield. He's a very hard worker and has plenty of upside."

Shoults (Oxford, Ind./Benton Central), a catcher, was a four-year letter winner for the Benton Central Bison. Shoults hit .360 with 20 RBI while picking up All-Hoosier Conference accolades his senior year. He was also named team captain and won Mental Attitude award during his junior and senior years and was tabbed the Rookie of the Year his freshman season.

Brett will compete for a roster spot as a backup catcher -- he's a very hard worker and had a very good year at Benton Central," Griffin said of Shoults. "He has a good arm and we're looking for good things from Brett down the road."

Shoults, the son of Kent and Mindy Shoults, plans to major in communications at Purdue Calumet.

Under Griffin’s leadership, the Peregrines took the 2015 season by storm, starting off the year 8-0 before finishing the year with a 23-16 overall record. The season included a berth into the Chicagoland Collegiate Athletic Conference Tournament in just the second year of the program.