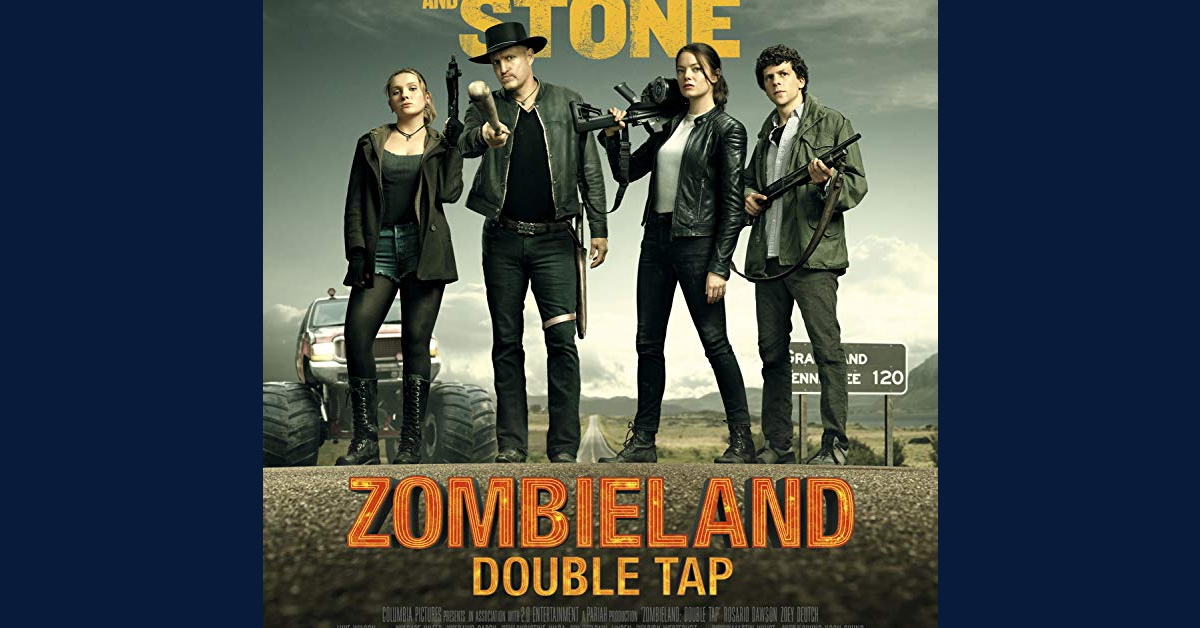 Zombieland: Double Tap picks up the story of our friends Columbus, Tallahassee, Wichita, and Little Rock ruling the zombie-infested world ten years after the first movie. The group has successfully made the White House their home and are seemingly living happily ever after, except for Little Rock. Desperate to find people, and boys, her own age, while being completely annoyed by the overbearing father figure in Tallahassee, Little Rock is anything but happy. So when Wichita gets spooked by Columbus popping the question, the sisters do what they do best-- leave a note. The rest of the film focuses on finding love, finding Little Rock and her new hippie boyfriend, and finding a way to defeat a swarm of T-800 zombies.

Director Ruben Fleischer did his job and he did it well. Actors Emma Stone, Jesse Eisenberg, Woody Harrelson, and Abigail Breslin step right back into their characters as if they have never left. The callbacks to the 2009 original film Zombieland were just what the audience needed. Whether it was the sisters leaving a terrible note and stealing Tallahassee’s prized ride, or characters making fun Tallahassee’s dated “nut up or shut up” line, the laughs and nostalgia made it all worth it. We all know how Tallahassee loves his zombie-killing tanks, so when he is forced to drive a minivan for the entire movie, you couldn’t help but laugh. The addition of characters Madison (Zoey Deutch), and Nevada (Rosario Dawson) were priceless. As the annoying, preppy, dimwitted pretty face that drove a wedge between Columbus and Wichita’s relationship, Madison brought comedic relief in both her actions and surrounding character reactions. Nevada’s Elvis-loving, badass persona was a great match for Tallahassee’s tough facade. But all in all, the T-800’s are what made the movie work. Without the Terminator-like zombies, the fight would be much too easy. They gave our leading heroes a challenge, which as we know can be a hard feat.

There were a few things that were just a bit too much, however. At the beginning when our heroes are reintroduced to us in front of the White House, there is an extreme slow-mo scene of them fighting off zombies to claim the White House as their own. It made sense, and it would have been awesome had it been better executed. The gruesomely evolved zombies combined with ten years of technology advancement could have made this epic. It was gruesome yes, but epic? Absolutely not. It felt like nothing was actually happening in the scene and when the heroes do their badass slow-motion celebratory walk towards the White House, the thrill is lost. Later in the film after our heroes have made it to Graceland and Tallahassee has had the time of his life, both his and Columbus’ doppelgangers show up. Luke Wilson and Thomas Middleditch are hilarious as the mirror images of our two protagonists. But that’s it. The two serve no more purpose than comic relief and a good fight scene (when the two turn into zombies, proving they’re the exact opposite of Tallahassee and Columbus) and not much else. Their arrival feels like a non-sequitur and with seemingly little impact on our protagonists’ character arc. Another minor downfall is some of the graphic quality when Columbus flashes back to “Zombie Kill of the Year” scenes. Pushing over the Leaning Tower of Pisa to kill a few zombies? It was a little too much on top of the obvious use of green screen. One last thing that really didn’t do it for me is the vomiting. So. Much. Vomiting. It’s disgusting and a little overdone. Prepare yourself.

Overall if you saw the original 2009 film and loved it, you’re absolutely going to love the sequel. It’s just another adventure to tag along on with our favorite heroes. The lighting, set design, special effects, visual effects, and cinematography were all seamlessly cut together into the action-packed film. So, if you’re a fan of Zombieland, Bill Murray, comedy, or gore this movie will not disappoint. Oh, and don’t forget to stay for the beginning of the credits, you don’t want to miss what’s up next.