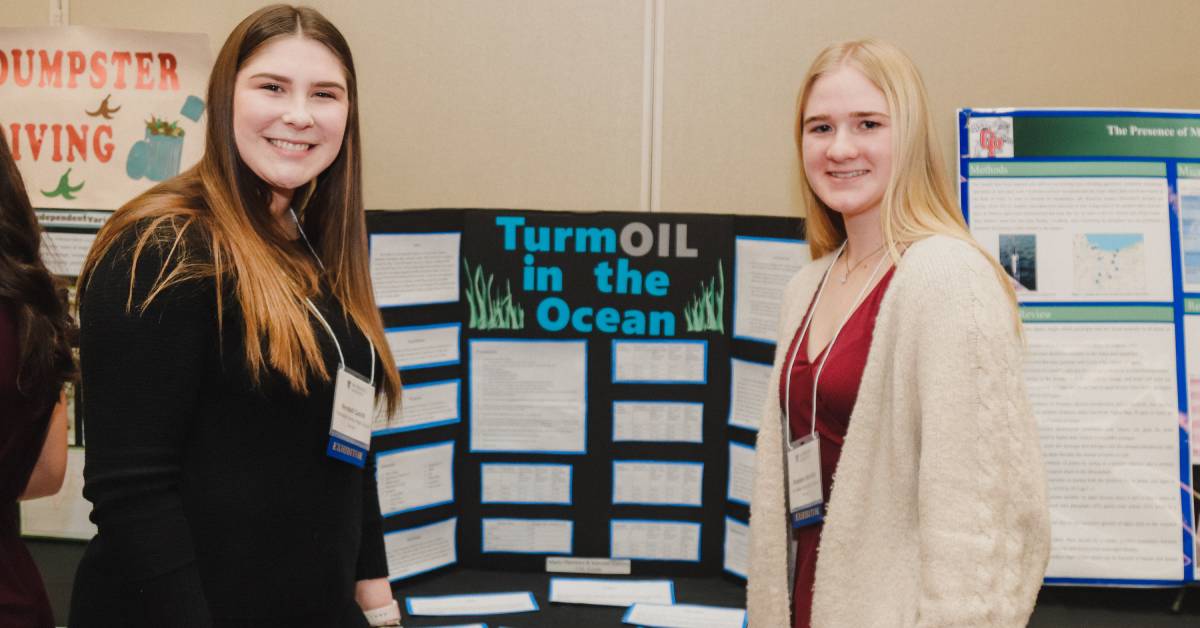 For the 67th year, students have sharpened their minds, curiosity, and professionalism at the Northwestern Indiana Science and Engineering Fair, and this year was a stellar turnout. Students from seven counties filled the Valparaiso University Harre Union ballroom in this cherished program that grows young minds and professionals, sponsored by several organizations including ArcerlorMittal.

“VU at its ethos is trying to help produce future servant-leaders. Right now we have a responsibility to train well students in the STEM fields as that is where a lot of the jobs are locally and nationally,” said Dr. Bob Clark, Fair Director and Chemistry professor at VU. “The science fair is great as it gives kids the chance to explore ideas and to actually investigate questions that they find curious and that’s the kind of thing that gets me excited. You can see from the projects that they’ve been working on these for months. It’s cool to see their creativity shine through.”

Marcie Guzman, the fair coordinator, said it was the University’s goal to invite students to feel connected to VU as they explore their future careers and what the University has to offer.

Made up of both middle school and high school students, the science fair offered a unique opportunity for students to present their hard work to multiple judges from organizations around the Region and state. Some of the judges were even VU students who had once participated in this fair themselves. The volunteer judges shared a communal excitement of encouraging the young scientists.

“Encouraging science is always important and it leads to the innovations of everything. If you can catch a student young, it encourages active thinking and learning,” said Amanda Szentesy, a chemist who works in quality assurance with ArcelorMittal. “Coming to a science fair and getting positive feedback on work you’ve put in is important to keep students interested in science. If you can keep encouraging the sciences now, maybe one day they’ll even end up working with us and helping lead innovation.”

U.S. Navy Commander Alan Ford was at the fair representing several organizations, including the  Science Education Foundation of Indiana, which runs the state-wide science fair coming up in March. Several of the top winners from today’s science fair will be eligible to attend. Ford said his mission is to encourage these young students and instill pride in what they are accomplishing.

Ford added that during that time he’s talked to more than 2,200 young researchers.

“I like to think I’ve met two or three future Nobel prize winners. These are wonderful young people. I really focus on giving these young scientists attention and talking to them as I would a peer because 45 years ago I presented my science project and I remember some judges that paid attention to me, were interested and wanted to hear what I was interested in. That was an encouragement,” he said.

Many of the young scientists at today’s event were there partly due to the encouragement of a teacher who recognized their potential.

“This event allows the students an opportunity to expand their minds and think outside of the box. They learn what else is out in the world and can learn that there are positive things that come out of this,” said Gail Zmierski, Middle School Science Teacher St. John Lutheran in La Porte.

The top projects can earn a student scholarship money to VU, and many of the prizes included a cash reward. For the students, however, their love of science and the chance to show it off was just as important.

“I’ve always loved the trial and error of science projects. It teaches you that if you get something wrong, there’s always another way to do it. It teaches you perseverance,” said Kaitlyn Wennerstorm, an 8th-grader at Nativity of our Savior in Portage.

Emma Bell and Tori Cannon, 8th-graders at Kankakee Valley Middle School, worked together on a project based on plastics and their biodegradability.

“We wanted to spread our idea so that maybe people can try this for themselves so they can make a bigger impact,” Bell said.

Valparaiso High School Senior Kyle Kristoff presented a project that has been a culmination of hard work completed in one of his classes.

“I’m part of a class at VHS called bio-medical innovations. It’s an 8th hour, extra-curricular class and part of it is to develop a project and take it to the science fair. This project has taught me a lot of lab skills and I’ve met some really great people through the process and made some good connections. This was six months of work and I’m excited to show it off and see what happens. It’s very fulfilling to show it off and talk with the judges,” he said.

The Science and Engineering Fair showcased many talented young scientists, providing a small glimpse into their bright futures as future community leaders.

“As a chemistry professor, it’s so important that we have kids that are really interested in trying to understand how the world works and what they can do to help solve problems and be the beacons of light that go on to help the community around them understand what science is all about,” Clark said.

The full list of award-winners will be posted at www.valpo.edu/nwisef. Top winners will have the opportunity to showcase their work at the state fair in Indianapolis in March, with the chance to go even further to the International Science and Engineering Fair being held in Anaheim, California.