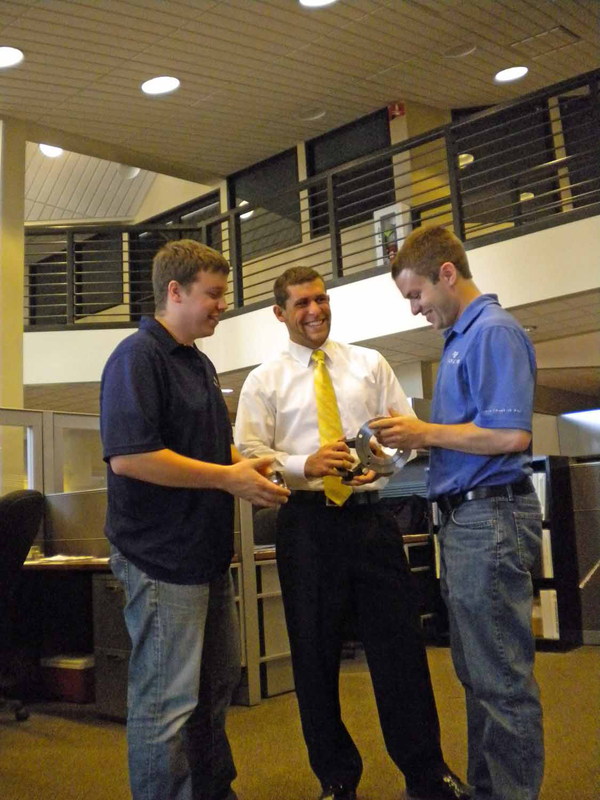 The following is a quarterly series of the Economic Development Corporation Michigan City, Indiana (EDCMC) to highlight the success stories of the community’s employers. The series is an example of the behind-the-scenes work of EDCMC to support new or existing businesses.

In addition, this past April, EDCMC embarked upon a process to develop a comprehensive and long-term action initiative. Through the initiative, several key economic development opportunities were identified, including aligning workforce development. Through education, EDCMC wishes to align the existing needs of businesses with targeted industry needs to create a healthier and more competitive marketplace in Michigan City and surrounding areas.

Tucked away in rural La Porte County, in-between fields and interstate, stands Vanair Manufacturing — a privately held company that engineers and manufactures the most comprehensive product line of vehicle mounted air compressors, welders, multi-drive systems and generators in the world. With most products exclusively assembled in Michigan City, the company that originated as a small division of a nearby compressor industry, Vanair has now grown into a global force in spite of the recent years of national economic difficulty.

Vanair prides itself on its young and highly talented and energetic engineering staff. With its senior leadership, together, they hope to spread the word about Vanair, their unique products sold worldwide and the many local workforce opportunities available.

Take Dan Ramirez, for example. He started at the company as an intern and made his way to Senior Engineer within a short time.

“It feels cool to be a part of a company that has its fingers all over the place,” the 29-year-old said. “Almost anywhere in the country, you can find people who buy Vanair’s products.”

Ramirez attended Purdue University North Central (PNC), where he graduated with a Bachelor of Science in mechanical engineering in 2008. His training in the field, however, began long before graduation day. As a senior at PNC, Ramirez was invited to work with a professor who happened to be a friend of the Vanair family. The professor introduced his budding student to Vanair, and the networking paid off. After proving himself in an internship, Ramirez was offered a full-time position just months before graduating from college.

Vanair’s Chief Executive Officer, Ralph Kokot, said hard work and skill like Ramirez’s is all it takes to make a quality career with his company. “Every employee at Vanair is very passionate and talented in every aspect of their work and life,” he said. “Each has patience to teach one another and care for each other in a way that brings us all together as a family.”

Kokot is so proud of his expanding “family,” he encouraged both high school and college grads to remember Vanair when applying for jobs. “Vanair would like the youth to know there are endless opportunities available here. With passion and drive, you can make a career in this industry,” he said.

Fellow engineer, Garrett Griggs, also began his career at Vanair as an intern. Graduating from PNC in 2011, he was hired as a design engineer and worked under his more experienced colleagues for some time to learn the ropes and get to know the company’s product lines.

Currently, Griggs and the company are working on innovative products from creating specialized parts for military equipment, designing and building high capacity air compressors for mining and heavy duty construction.

“I get to see it all from start to finish, and truly see my designs working. We have the freedom to see it go from the computer screen to the shop and then travel to the field,” Griggs, 24, said.

Driving around Michigan City, a passerby might not even notice the 90,000 square-foot Vanair facility. Located just off of Interstate 94 and U.S. Route 421, Vanair celebrated 41 fast-paced years in the field. The company, which originally was a subsidiary of Sullair Corporation called Sullair PTO, grew out of a New Buffalo, Mich.-based plant with 14 employees into the independent Michigan City corporation it is today with a 120-strong workforce.

“People might be surprised to know that while we have a set group of products, many of our solutions become products to fit custom applications,” Kokot said. These solutions include the use of Power-Take-Off (PTO) technology to drive rotary screw air compressors using a vehicle’s own engine as the power source.

Much of Vanair’s early success is credited to PTO technology as the company was the first to pioneer this advancement.

In addition, Kokot is the co-founder of the Warriors First Foundation (www.warriorsfirstfoundation.org), an organization developed to raise money for veterans in the area. To show their support, Vanair employees wear the “Vanair Support Our Troops” T-shirt every Friday to give thanks to the men and women who serve our country.

This hands-on, casual and thriving atmosphere of Vanair is exactly what Griggs said he enjoys most about his job. “I love what I do here,” he said. “You go all over the world and people know Vanair and what we do here.”

Griggs and Ramirez are not the stereotypical 20-somethings of Generation Y. They were not caught up in the “brain drain” or youngsters who leave their Northwest Indiana hometowns for education or training and never return. Both men have no plans of searching the “wanted ads” for jobs elsewhere, and they encourage others around their age to keep their eyes and ears open for local opportunities like theirs.

“My advice would be to learn how to learn,” Ramirez suggested. “Pick up as many skills as possible because the more tools you bring to your employer, the better off you will be.”

Griggs warned the younger generation to not feel entitled. “You have to be a sponge,” he said. “There is a lot of competition out there. You have to strive to be the best, to stand out and be the most interesting so you can get that job.”

And even the simplest things, such as dressing professionally and showing up on time go a long way, he added. “They’re not going to hire you if you show up at the interview dressed in jeans and a T-shirt,” Griggs said. “Employers are looking for passion and drive that will lead to success.”