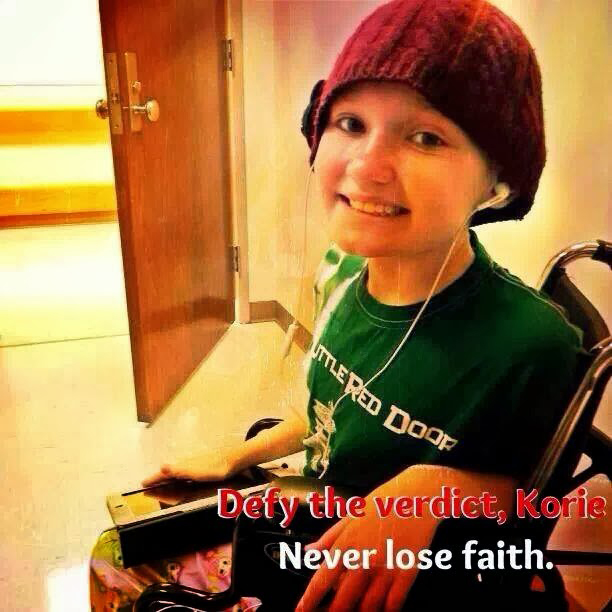 This morning Taylor Swift is all over Twitter because of the Grammy Awards. However, I have a very different perspective as I consider her name. I think about her name and I have an image of a little girl in mind.

Every now and then a story that so obviously needs addressed comes across my desk. I'm embarrassed to say that I have put this one off because it is so heartbreaking I knew it couldn't be addressed without tears and it feels like putting it in writing makes it real. That makes me a complete coward when compared to what this little girl and her parents are going through.

Meet Korie Howard, a sweet and beautiful 10 year old girl who is now fighting for her life.

It started with an achy knee. When the doctors noted something odd on her x-ray, they began to investigate. It turns out that Korie was experiencing something far more devastating than growing pains. In the fall of 2012, Korie was diagnosed with Osteosarcoma, or cancer of the bone.

Since then Korie has gone through radiation, various chemo treatments, knee replacement...and let's just not beat around the bush here okay? When a mother has to make posts like "gave her some morphine this morning, hope that helps", you kind of get the picture. Are more details necessary? I say that as I glance at my son and think no...I don't want to know this...don't want to imagine it or think about it...

Finally, when Korie experienced shortness of breath, more tests were done and her parents were faced with a fresh new horror. The cancer had spread to her lungs. As of right now, Korie has months, maybe weeks to live. The community of Knox, IN rallies around her, supporting her with local events and t-shirt sales, but they can't give Korie what she wants most, and what she wants most is so typically pre-teen that it breaks your heart.

Imagine being 10 years old, knowing that to wish for a day full of fun physical activities is beyond your grasp. Is asking to meet Taylor Swift really that much to ask?

Now the only question is, will Taylor Swift grant a dying girl's wish?

You can show your support by joining Korie Howard's Fan Club!! Fight Like a Girl Korie!! on Facebook, sending donations via the site set up for donations for Korie, and you can Tweet this blog or any other info or pleas to Taylor, that would be fabulous. She can't fulfill this wish if she doesn't know about it. Her Twitter handle is @taylorswift13. Let's make some noise!!!