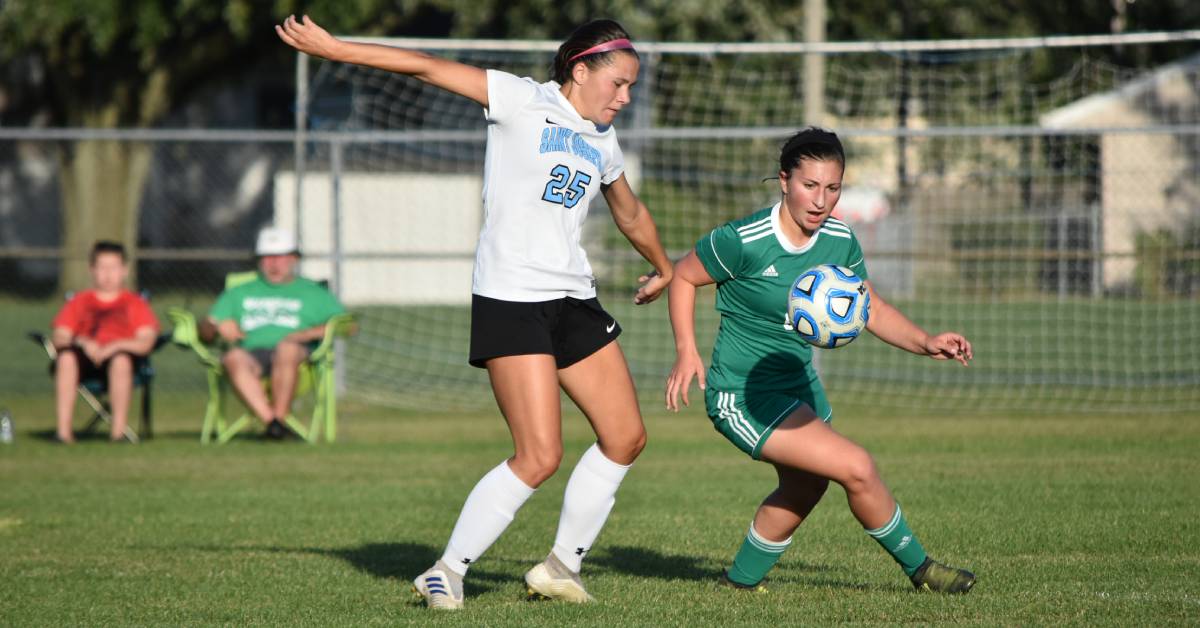 The Valparaiso Vikings took on the St. Joseph Indians on home turf and the game was all about determination.  During the first half #21, Caroline Edmonds scored two goals within the first few minutes. A weak-side through ball allowed Edmonds the first goal and her snagging a deflection gave her the second goal.

Taking advantage of an injury break Vikings Isabella Grisafi quickly gathered her teammates, giving them a motivational talk and telling them to stay focused and determined. From there Valpo took control of the ball for the remainder of the first half.

Fans were on the edge of their seats.  "It's a little bit nerve-wracking being down. I think we can definitely rally in the second half" said Ashely O'Bannon, mother of Vikings sophomore Isabella Latinovic.

The Harringtons, who have two daughters, a freshman and a junior on the Indians knew the second half was not going to be easy.

"St. Joseph got off to a great start and got two goals. The game evened out after that. Valpo's a good team. They keep possession well. St. Joe has some great players that are difference makers" said Matt Harrington.

Matt grew up in Valpo and himself is a Valpo graduate. He was on the first Vikings high school soccer team. For him, it was fun to be back, and even more fun to watch his daughters play against the Vikings.

Stacey Adams, Valpo Athletic Director knew the Vikings were not going down without a fight.

"If it wasn't for the first eight minutes we would be right there. They got two quick goals on us and now we are fighting uphill, said Adams. “We need to keep our composure and get one hill within the first fifteen minutes and keep battling back. Our girls have a tremendous amount of heart. They don't quit. If the clock is ticking, we have a  good chance. This is one of the best teams in 3A soccer so this is a good test."

In the end, it was the Indians who took victory with a final score of 2-0.

Despite the loss, Vikings Head Coach Robert Cespedes was pleased.

"I couldn't ask for more effort on their part. They stepped it up and played a really good match,” said Cespedes. “I would say we had possession the better part of the game but, unfortunately, we just couldn't make the goals."

"I thought we played well. We worked together as a team and that's the best you can do,” said Smith. “We just have to work on our shots and creating ball through and then we can definitely beat them when we play them again if we do."

"This was a tough matchup," said Indians Head Coach Phil DePaum. "This was two really good teams going at it hard. I thought Valpo certainly did a lot of things that challenged us. They had a lot of energy in the second half that we had to withstand. I was really happy with our performance but I think Valpo is one of the best teams in this season."

"We stayed composed but we attacked at the beginning of the game, which put us ahead. We just really distributed the ball well,” said Edmonds. “We knew Valpo was going to be a really good team so we were really determined to play our hardest. With a great team like that, we had to connect and pass the ball well."

Tuesday the Vikings will take on Crown Point while St. Joseph goes up against Plymouth on Wednesday, followed by an additional game in Indianapolis.