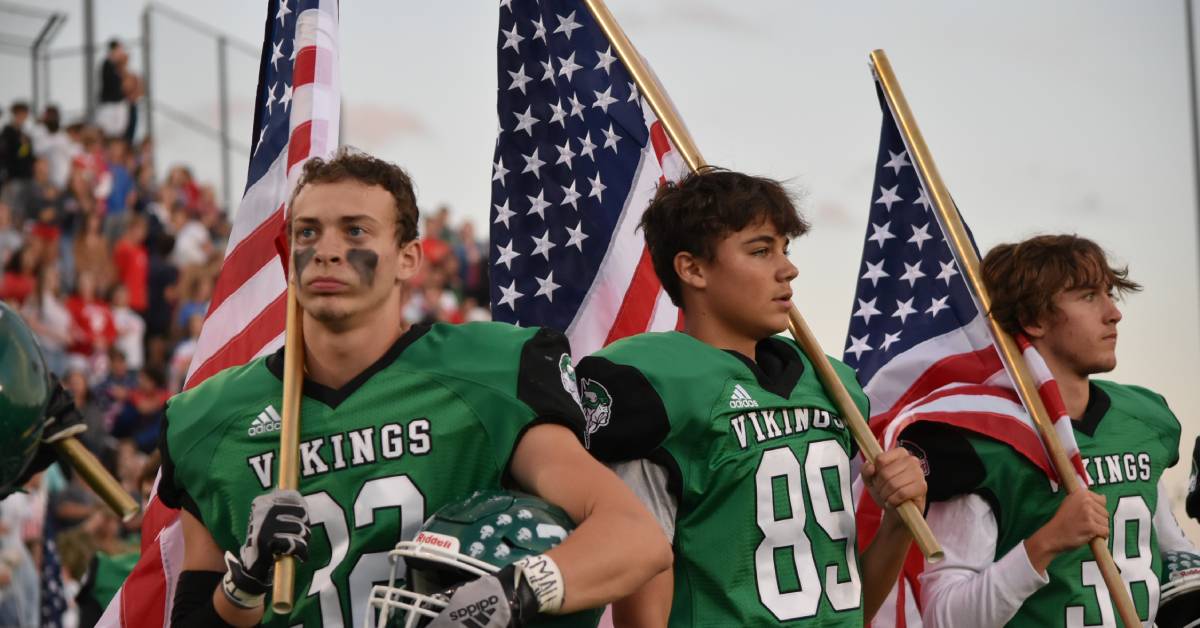 The Valparaiso High School (VHS) Varsity Football Program hosted Patriot Night to show appreciation for first responders and members of the military. The entire town went "green" in support of federal and state law enforcement, firefighters, EMS, and military veterans and active-duty members. Pregame activities included a landing by the LuthernAIR helicopter, and the 713th INARNG unit interactive display of their MAT-V combat vehicle,  as well the Folds of Honor, and Indiana’s Fallen Heroes Program. It all turned out well for the Vikes as they crushed a win against the Michigan City Wolves 41-21.

Excitement was in the air and everyone was feeling good at the start. “This is a great opportunity for us to make a statement to the Region. We haven't beaten these guys since I've been the head coach. This is the only team in the conference we haven't beaten. So it would be nice to come over here and get a win," said Coach Phil Mason of the Wolves.

Vikings' Manager Ron Hanson was not underestimating the Wolves. “I think we have a big contest in front of us. We are playing a really good team. It will take our best effort. It's one of those things where champions play champions. It's exciting. The environment is exciting! We are coming off a really good week of practice. We have to go out and perform."

Viking's Coach Billy Marshall agreed. "We are excited tonight. We had a great week of practice. We scaled a bit back with the heat. The biggest thing for us is to pay tribute to all our first responders and vets as well. For the ones that couldn't be here we have Folds of Honor with pictures of our Indiana KIA.”

Marsha and Eric Scott whose son plays left tackle for the Vikings were pumped for the game. "The defense is strong. Offensive line is great. They are strong as ox! We are looking forward to a win. The Blackhawk is cool. LuthernAir is here. We have lots of police out here and the military. You couldn't ask for anything more."

The VHS Marching band warmed up fans with their rousing rendition of the VHS School Song. Then it was the Presentation of Colors by the Michigan City High School Marine Corp ROTC Color Guard as the VHS band performed "It's a Grand Old Flag." A  50-foot American flag was unfurled during a breathing taking flyover by the Blackhawk.

The Indiana Patriot Guard came in support with a motorcycle flag line around the track as honorees themselves lined the field joined by the VHS Football team proudly displaying flags with all military and public safety personnel represented.

A military bomb disposal robot presented the game ball followed by the coin toss. Then it was the anticipated kick-off as the Vikings took on the Wolves.

First quarter was a tense back and forth. Antonio Osorio lead the Vikings to their first touch down followed by a successful extra point. The Wolves quickly answered with a touchdown and extra point of their own. Then it was the Vikings who scored an additional touchdown ending the first quarter 14-7.

"Our progression tonight was from our quarterback. I was pleased. We came out and we fought. Our offense was on the ball. We were balanced. Now we have to get ourselves in contention to hopefully have a chance to play these guys again. We will get the Wildcat defense figured out but right now our focus is getting ready to play Merrillville and finish out the season strong."