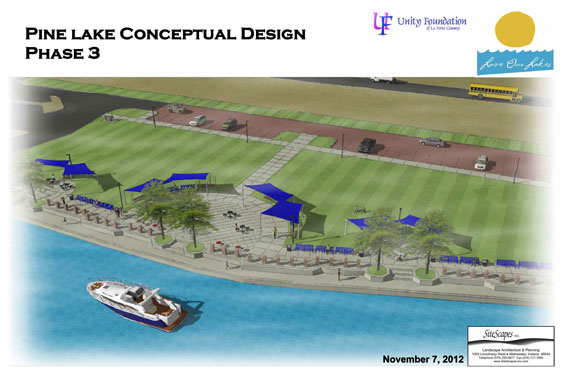 Have you ever had the chance to create a park? The Unity Foundation of La Porte County is being innovative and is doing just that. When it’s all done, a 2-acre treasure on beautiful Pine Lake will be preserved forever.

It started in 2010 when a Unity board member noticed a small ‘For Sale’ sign on a lot near the intersection of Hwy 39 and 35. When Unity leaders began talking about it, they came to the same questions: What was going to happen to it? Would it be something that everyone could enjoy?

Unity’s Co-Chairman Ed Volk, a local attorney, reached out and learned that a six story condo had been planned, but was sidelined in the economic downturn. Because of other buildings built in the last decade, people felt they might lose something they enjoyed for free - their view of Pine Lake.

It wasn’t just views that have gone missing from the La Porte Lakes. La Porte originally had 17 lakes in and around it. Now there are 10. What happened to them? The lakes are an important part of our identity and a great part of the charm of living in La Porte. Where else do you find nice, clean lakes on major highways such as 39 and 35? Pine Lake is a great fishing, boating and recreation arena. While other La Porte lakes have been kept relatively open, Pine Lake is heavily developed.

The Unity Park project has three parts: acquisition, development and endowment. The first is to pay for the purchase, which was discounted due to foreclosure. The second is to transform the property from rubble and weeds to something beautiful and usable. The last is to build a permanent endowment fund to maintain the property. When ready, the Unity Foundation will ‘gift’ the property to the City of La Porte. It will be ‘ready to use’ and no burden to the City during these challenging fiscal times. This project is innovative in that the Unity Foundation saw an opportunity and did something new, when no one else could. The “gift” to the community will last forever, including future funds for maintenance.

While Unity is the quarterback on this project, we’ve had incredible support from the La Porte Park Department, Mayor Blair Milo, families, businesses, unions, clubs and organizations. The project will connect to neighboring Kiwanis Park and ultimately to a new trail system being developed. Besides the Unity Foundation, the largest investor in this project so far is coming from the DNR’s Bicentennial Nature Trust of $200,000 for acquisition. The park will be an official Indiana Bicentennial Project in the 2016 celebrations. To date, more than $850,000 has been pledged toward our minimum goal of $1.2 million. If you’d like to learn more or support the project, please visit www.uflc.net.

This project, when completed, will create a more welcoming ‘front door’ for La Porte, mimic the Marquette Plan by keeping the lakefront open, improve property values and minimize environmental impacts. With the Unity Foundation’s leadership, innovative thinking and access to resources, this 2-acre treasure can be enjoyed by all.