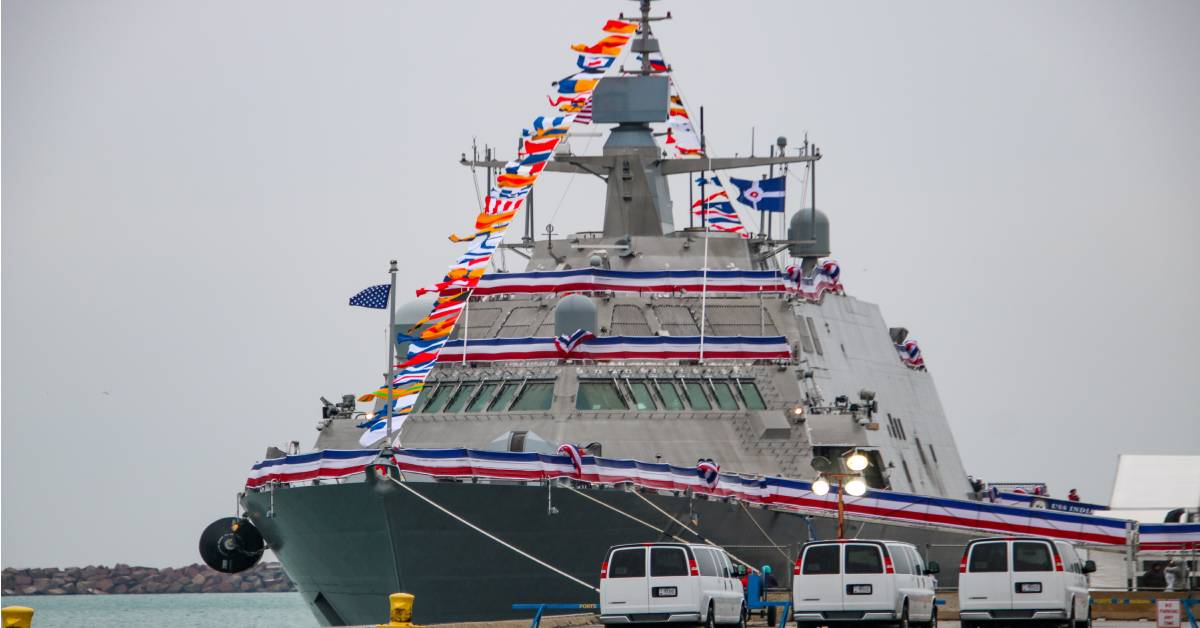 On July 30, 1945, two torpedoes launched by the Imperial Japanese Army struck the hull of the CA-35 Indianapolis, second of its name, as it returned from a successful mission to deliver enriched uranium for the first atomic bomb.

Of the 1,195 crewmen on board the Portland-class heavy cruiser, 890 survivors found themselves adrift and exposed less than 15 minutes after impact. When rescue finally arrived three days later, only 316 sailors were pulled from the ocean.

Saturday morning at the Port of Indiana in Burns Harbor, four veterans from that voyage joined local, state, and national officials to honor the history and service of those lost as well as celebrate the commissioning of the U.S. Navy fleet’s newest addition— the fourth USS Indianapolis, LCS 17.

“We are truly honored that the United States Navy’s newest LCS is named after our capital city,” said State of Indiana Governor Eric Holcomb in his opening remarks. “This Indianapolis before you, and behind us, is tied to a historic legacy.”

“We’re privileged in Indianapolis to host a reunion of the remaining survivors each year, dating back to, I’m told, 1960,” Holcomb continued. “They were, and they will always be, heroes in every sense of the word. And their legacy, the very spirit of that 1945 crew, now sails with you all.”

A projected 11,000 guests braved a steady rain and chilling winds to bear witness to the once-in-a-lifetime ceremony, and the first such commissioning hosted in the state.

“I am delighted to see such a large crowd here today because it really reflects the degree of support that the people of Indianapolis and the entire Hoosier State provide to this ship, its crew, and your navy,” Grady said.

Borrowing a page from Indiana native son David Letterman, U.S. Under Secretary of the Navy Thomas Modly provided those gathered with a Top Ten List of Things to Remember from the Commissioning Ceremony of the USS Indianapolis, ending at #1 with “freedom.”

“LCS 17 is one of a class of littoral combat ships that is appropriately named the Freedom-class,” Modly said. “It is what she represents. It is what she will fight to defend.”

“But more importantly, she will play a critical role in inspiring others around the world who seek freedom because every person in the world who comes in contact with this crew and this ship will know what freedom produces,” he continued.

Following remarks from U.S. Congressmen Jim Baird and Pete Visclosky, and a keynote address from Deputy Chief Management Officer of the Department of Defense Lisa Hershman, Modly officially placed the USS Indianapolis LCS 17 into commission, under the command of Commander Colin J. Kane.

To complete the ceremony, Commander Kane ordered the hoisting of the colors and the commission pennant, set the first watch, and welcomed the ship’s first crew aboard. He closed out the special event by promoting one of the crew.

“Over the years, sailors embrace the term ‘shipmate,’” Kane said. “‘Shipmate’ has different meanings to each and every one of us. It can signify a person who will help you out, or it can simply be someone aboard your ship.”

“My favorite definition is that person you serve shoulder-to-shoulder with through good times and bad. Someone you can loan a few dollars to and know you’ll be repaid. It’s a person who takes responsibility in their spaces and equipment, pride in their ship, the navy, and the United States of America,” he continued.

“Officers, chief petty officers, and sailors of the USS Indianapolis— I am extremely proud to have all of you as shipmates,” Kane concluded.

The new USS Indianapolis was constructed by Marinette Marine out of their shipyard in Marinette, Wisconsin. After the ceremony, she will make her way to her new homeport in Mayport, Florida.

A full video of the event is available on the USS Indianapolis Commissioning Ceremony Committee’s website:https://www.ussindianapolislcs17.com/events/commissioning.html.