2013 was host to quite a year for LaPorteCountyLife Sports! From football to basketball to running and everything in between, it was a busy year for sports in the region.

We picked 10 of our top stories from the Sports Section on LaPorteCountyLife that we felt best represented the year we had telling positive stories in this arena. Take a look below and let us know your favorite of the bunch in the comments!

A Dual Athlete That is Doubly Great
Click here to read this article!

There is a girl that you should know about; a young lady who is making a name for herself in her community and her school. Zoya Ganz, a student at Marquette Catholic School in Michigan City, is an athlete with great grades and a great attitude. Zoya began her journey to athleticism in the 5th grade when she joined the volleyball team. She is one of three children and was born to a mom who was adamant about her kids leading healthy lifestyles. She had a natural knack for volleyball and really enjoyed herself. From there she kept playing and made it onto a traveling volleyball team in 8th grade. During this time Zoya also ran cross country. It was a busy time for her since cross country and volleyball take place at the same time during the year.

The family friendly event brought increased awareness of the CASA (Court Appointed Special Advocates®) Program, while it raised over $6,000 in needed funds to support advocacy for local children’s rights. Proceeds from the race will directly help Harmony House/CASA recruit and train CASA volunteers to give a voice to abused and neglected children in court and the foster care system.

Klingerman signed her Letter of Intent Tuesday surrounded by her temamates, family and coaches while Price signed his Letter of Intent with his father and assistant coach Damon Groves looking on.

After a long week filled with rain delays, the smell of popcorn finally filled the air. Excited fans and nervous players were anxious to start the championship game.

Going into this tournament, Plum, coached by Mike Riehle, Jeff Pliskey, and Phil Pope had had a flawless season. All the other teams were gunning for them, especially the Orange team.

Basketball Pride Runs Deep Throughout the Town of Michigan City
Click here to read this article!

Basketball pride runs deep throughout the town of Michigan City. The school prides itself on having the seventh largest gym in Indiana. Fans gather in the “Den” for Friday night games.

Starting July 22 and running through the 25th, the Wolves are hosting their annual camp. Each day the camp goes from 8:30 to 1:00 pm. Grades three through seven are welcome to join. There will be a discounted rate each day that passes.

When Troy Campbell was coaching volleyball at Marquette Catholic, he turned the Blazers program that was already a solid Class A power to one of Indiana’s top volleyball programs in all classes. Now he is looking to do the same at New Prairie.

Coming off a 27-7 season a year ago, Campbell begins his second season as Cougar skipper with extremely high hopes.

At the IHSAA Cross Country State Meet in Terre Haute, senior Anthony Didion of La Porte placed 4th with a time of 15:43. Didion didn’t let his team down achieving the honor of gracing the podium one last time for La Porte. The La Porte Boys Cross Country team was just 1 point shy of qualifying for the State Meet losing to Munster at Semi-State.

The La Porte team rallied behind Didion though, coming down to the meet to cheer for their teammate. 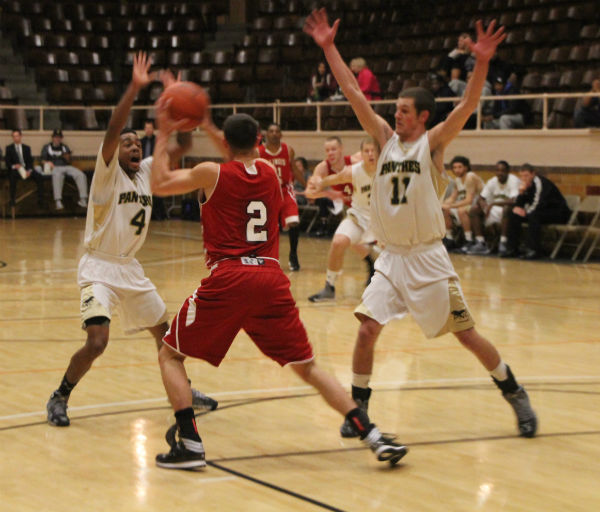 PNC Basketball An Exciting Watch in 2013-14
Click here to read this article!

Being a defensive force is something the Purdue University North Central men’s basketball team prides itself on.

“We want to be a identified as a team that works hard on the defensive side of the floor,” Head Coach Matt Bush said. “So far (the players) have bought into that. It hasn’t shown so much in terms of results, but we are getting better.”

High Expectations for Marquette Boys Hoops in 2013-14
Click here to read this article!

Coming off two consecutive seasons in which the Marquette Catholic High School boys basketball team finished one-point away from a sectional championship, expectations are sky-high for the Blazers, who return all five starters, including last season's leading scorer Ryan Fazekas.

But the past is the past, Head Coach Donovan Garletts said, and the Blazers are looking forward - and not letting the near misses from seasons past affect the goals of the 2013-14 campaign.