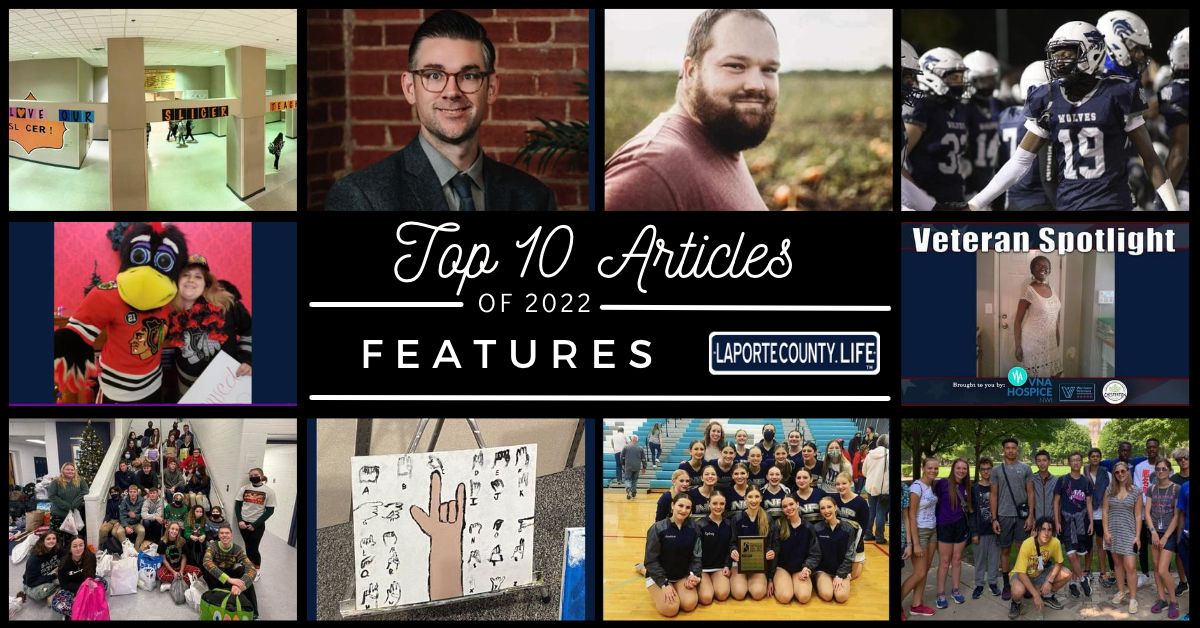 It’s not everyday that you get to sit down with a cancer survivor, a military veteran, a change-maker in the community, or a thriving high school student and get a look into what it’s like to live in their shoes. By sitting down with the members of this Region, we’re able to learn a bit more about their experiences, and also what makes them so great to have around.

It’s special moments like these that we are particularly proud to share on the GreatNews.Life sites, including Life in the Spotlights, Survivor Series, Veteran Spotlight, Leadership Life, City in the Spotlight, Voices, and more.

In no particular order, here are the top 10 feature articles on LaPorteCounty.Life to recap the good news in 2022!

Marquette Catholic High School’s (MQTT) students recently returned to school on January 3 for the 2022 spring semester. After a relaxing two-week break, the MQTT community is ready to get back into learning with new schedules and even some new teachers.

The MQTT community continues to follow safe COVID-19 guidelines and remains in-person to give the students the important, hands-on learning experience they need to reach their highest potential.

The students were assigned a theme given to them by Deaf-Ember/Signs of Fun Camp. All of the themes had to do with deaf people, ASL or deaf culture.

#1StudentNWI: Getting back into the swing of things at New Prairie High School

Coming back from winter break can be tiring, especially with getting back into a routine. With winter break over, New Prairie High School (NPHS) is getting out of the chaos left after finals last semester.

Practices are up and running, a dance is on its way, and competitions (comps) are here.

As a NIPSCO employee, Gene “AJ” Krout never expected to have to detain an unruly individual, especially within his first week of work. When the individual got out of hand on the job site, however, Krout made the decision to step up and help an officer in need.

On Krout’s second day on the job, a man came out of his house and began to run around and disrupt the team’s work. Krout called the police to diffuse the situation. At first, he stayed in his truck because he didn’t want to get involved. However, as the situation progressed, he realized there was a chance to help.

The week of May 2 through 6 was Teacher Appreciation Week and La Porte High School (LPHS) couldn’t be more excited! Teachers play such an important role in our school system and we wouldn’t be able to do anything without them!

The administration and students celebrated them by giving snacks, letters, and flowers. Through these mini-projects, students are brought together to celebrate and recognize their teachers.

High school wasn’t easy for some kids, and for Hailey Holder, it will be a time she would never forget. In December of 2017, Holder was diagnosed with leukemia during her junior year of high school. When Holder was diagnosed, she did not fully understand what was going on.

“I didn't know what it was at first when I first got diagnosed on December 12, 2017. I just noticed that my mother was crying. I had no idea what it meant at the time. I actually had to spend my first two weeks getting my first round of chemo, and it wasn't pleasant as I wasn't going to make progress. It wasn't until about the 23rd they released me. However, when I got home, I was very weak and could barely walk. I started to go on bed rest for a good few months,” said Holder.

#1StudentNWI: La Lumiere’s busy preparations for the start of the new school year

Directly across from Lake La Lumiere, construction of The Forum started in early July. As a tribute to honor long-time La Lumiere community members Bryan and Judy Smith, The Forum is a flexible space for the community that can host many different events such as Fine Arts Friday, serve as an outdoor classroom, watch a production from the La Lu Players, or a spot to find some peace and quiet during a free period.

The Smiths said, “We chose this project, believing that it would be a wonderful gathering place for faculty, students, and staff for years to come. And both would definitely bring out the full potential of the natural beauty in the area along Lake La Lumiere.”

A breezy temperature of 48 degrees on October 7 in football stadium lights marked the end date of Michigan City High Schools (MCHS) spirit week. This spirit week was a remarkable success; all grade levels participated in the dress up days, and even the teachers and faculty took part in the pregame festivities.

The MCHS pep rally was truly unlike any other. Each class, split into their own sections, were cheering as loud as they could in order to win the coveted spirit stick. A game of musical chairs was played by the class officers, and Senior Class Vice President Kayla Campbell won.

Looking for a way to serve while getting training for a future career, Marilyn Whitfield enlisted in the Army after graduating from high school in 1978. She completed basic training at Fort McClellan in Anniston, Alabama. Then, she was “on the desk” for Advanced Individual Training (AIT) at Fort Lee in Virginia.

Whitfield was assigned as a Prescribed Load List (PLL) clerk, an equipment records parts specialist stationed with the ASA 372d, a radio research company supporting the 25th Infantry Division. The company was inactivated in Vietnam on March 6, 1971. It was reactivated on July 1, 1974 at Helemano Military Reservation, Hawaii.

A La Porte Life in the Spotlight: Nate Loucks

Nate Loucks' career and education of becoming a pastor stemmed from his mother's death when he was a teenager and from his passion of always wanting to help people. When his mother passed away, Loucks was able to see just how helpful a church and its community could be. Members of the church helped Loucks and his family both mentally and physically during that time, and that kindness and compassion from church members inspired and pushed him to become the person he is today.

“I’ve always wanted to do something to help people, in politics, social work, whatever. As preachers, we do more than just preaching sermons; we give back to communities and help those in need,” said Loucks.