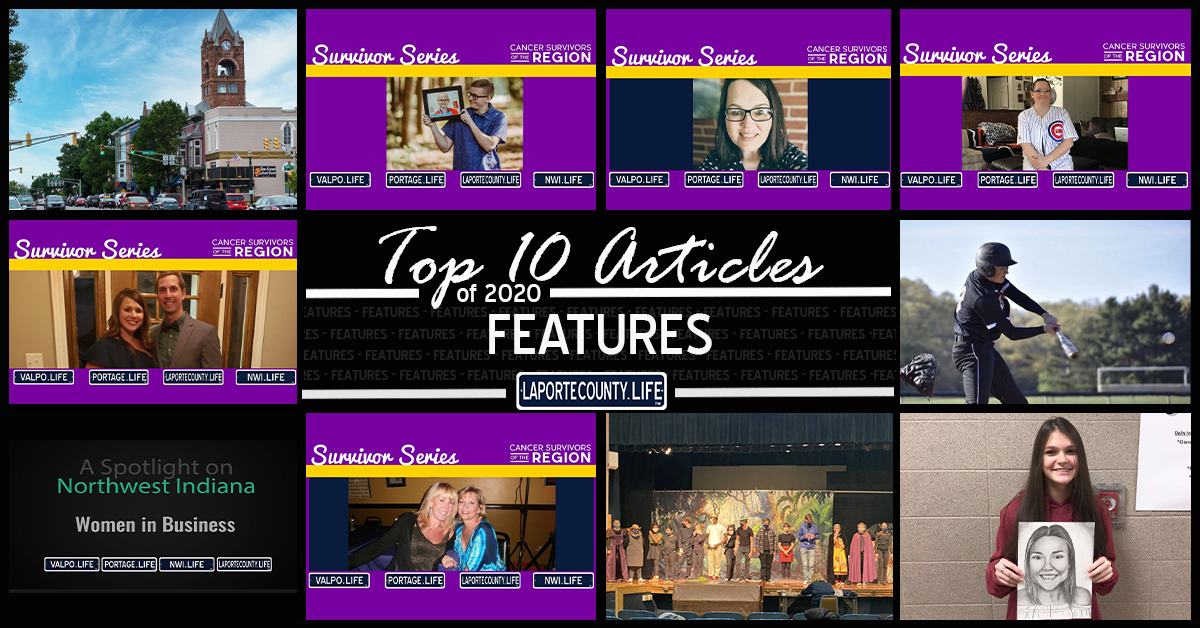 Here at GreatNews.Life, we are lucky to have the honor of highlighting the incredible individuals who make La Porte County a great place to be, even during 2020. Whether it was young journalists writing about their school as a #1StudentNWI intern, inspiring community members sharing their cancer survival stories, or our weekly 10 Fun Things to Do, there is so much that we get to learn and publish every year.

In no particular order, here are the top 10 feature articles from LaPorteCounty.Life in 2020:

What a long, strange summer it’s been! If you’ve been following along, each month we shine the spotlight on one of the amazing small towns that make up our incredible community here in Northwest Indiana. After a few months off, we resume our tour of our local cities, and this time we head east to La Porte County to check out the town of La Porte, a great place to live, work, and play!

Prestin Butcher’s battle with cancer was sudden and dramatic. When he was in fifth grade, he started getting severe headaches disrupted his ability to take part in swim practice. His mother took him to the doctor where they did a CT scan that showed a terrifying result.

Kimberly Hendricks said her adopted children are the kids she was meant to raise and love. She is grateful for her children, but there was a time when she feared she may never be able to have the family she had dreamed of since she was young.

“I never would have thought to help others in this way if I hadn’t gone through it myself,” said Tonya Hill-Rios, a Portage resident and cancer survivor. “It’s been more eye-opening to me than anything else in my life.”

Trevor Henckel is a senior at Westville High School, and he has been a part of the school corporation since he was in kindergarten. He is active both academically and in many extracurricular activities and sports. All throughout his school career, Henckel has been dedicated to his studies, achieving honor roll and ranking at the top of his class every year. Henckel has even gone above and beyond by taking dual credit and AP courses every year of high school.

Since 2017, La Porte High School has had their own program for helping students in need; this program is called Slicer Champions Mentoring Program.

#1StudentNWI: Marquette Catholic High School theater, a home for all

Amy Crane, the Marquette Catholic High School’s theater director, has been interested in theater since she booked her first role in “A Christmas Carol” during her first year of high school. 22 years have gone by since she started working at Marquette, and the whole time she has been involved with the theater department.

As a nurse at Methodist Hospitals, Marsha Smith encounters illness and disease on a regular basis. This in no way prepared her for her own breast cancer diagnosis. Smith discovered a lump in her breast while she was taking a shower. Initially, she did not think much of the discovery as she has found lumps previously, but she knew this one was different.

A Spotlight on Northwest Indiana Businesswomen

Over the years, we have celebrated and featured many people through our Life in the Spotlight series. With over 1,000 spotlights shared, it can be easy to miss a few here or there. As such, we want to bring a few special ones back to the forefront, this time focusing on businesswomen. Read on for snapshots of these truly amazing and inspirational Northwest Indiana businesswomen.

At 30 years old, one of the last things Nicholas Petralia expected to encounter was a bout with cancer, but when he was diagnosed with stage two testicular cancer back in 2010, that very battle became his reality.