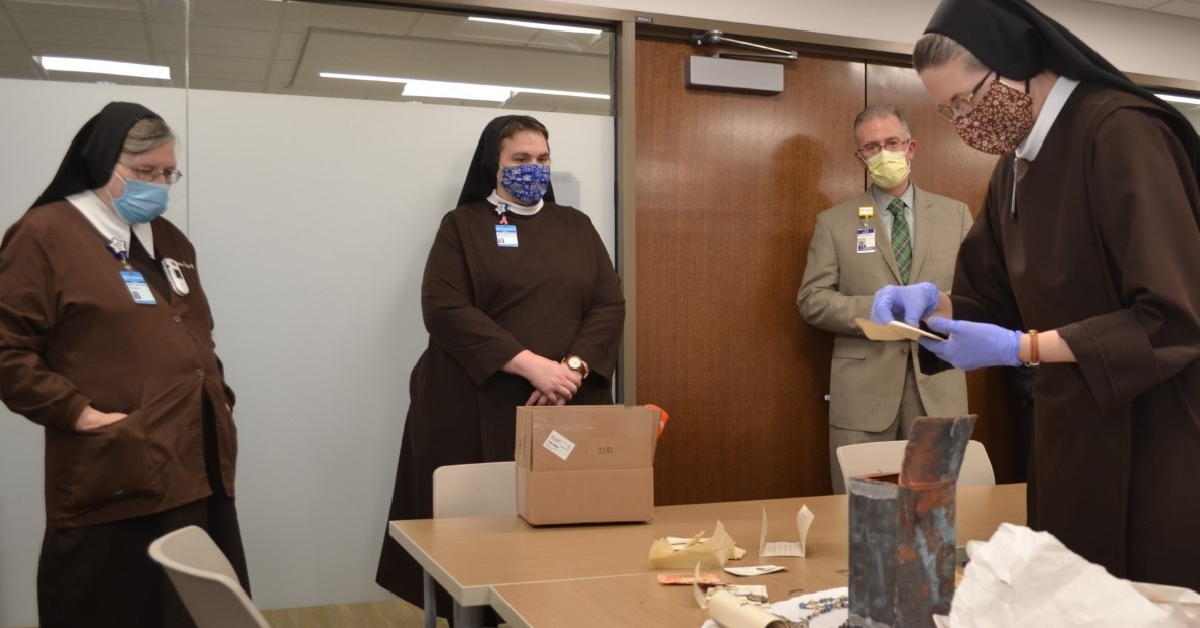 The treasures that had been first embedded in the stones of the old St. Anthony hospital a century ago, were finally revealed on Tuesday, Dec. 1, with the opening of time capsules at Franciscan Health Michigan City.

Sister Petra Nielsen, Vice President of Mission Integration, carefully opened the containers in a conference room of the current hospital as other hospital officials watched. Crews from Tonn and Blank Construction removed the capsules as they continue work to reconfigure the Homer Street campus.

A glass container had been originally placed in the original hospital building when the cornerstone was laid in 1903. When that building came down, the cornerstone was relocated to the sign at the main entrance on Wabash. Unfortunately, the glass container had been broken. A button recognizing the hospital’s 75th anniversary had been placed inside the container, evidence that it had been opened at one point. Along with a glass-encased cross, several religious medals, a piece of blessed palm and two scapulars were inside.

A metal container was found better preserved in the chapel of the 1926 building. It was labeled 1903 to 1924 and contained a multitude of mementos. The box included an Apostolic Blessing from Pope Pius XI, two rosaries, one of the crosses that had been worn by sisters at the hospital, several blessed medals and tiny religious statues.

Several prayer cards were inside, including the death card for Mother Maria Theresia Bonzel, foundress of the Sisters of St. Francis of Perpetual Adoration, who died in 1905. Pressed flowers were identified from the floral piece on the coffin of Mother Josepha Dirkmann, the second superior of the U.S. province, who died in 1923.

Those who assembled the capsule nearly a century ago included several coins from the 19th Century, including a one-cent piece from 1845, and a Nov. 5, 1924, edition of the Michigan City Evening Dispatch announcing President Calvin Coolidge’s election victory.