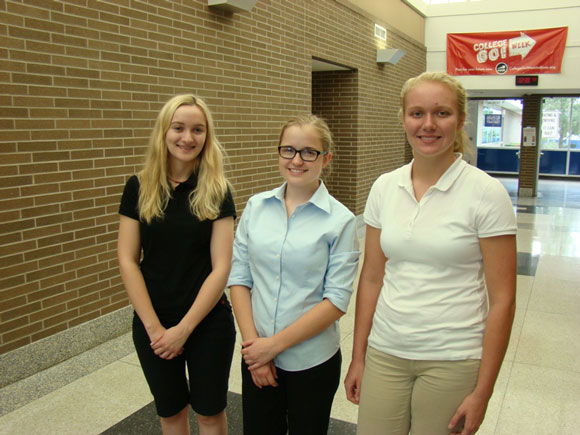 Michigan City’s semifinalists include Lillianna Pollnow, Theresa Saenz, and Veronika Werner. All three are members of the National Honor Society and have been involved in numerous academic, extracurricular, and volunteer activities. Michigan City High School has more 2012 Merit Scholarship Semifinalists than any high school in the area, public or private. “These girls are outstanding, beyond just academics,” said Lee Dabagia, MCHS Principal. “We are very proud of their accomplishment and know they have tremendously bright futures ahead of them.”

Lillianna Pollnow is a member of Michigan City High School’s Science Olympiad Team. She plays in the City Ringers bell choir, and is a section editor of the Alpha Yearbook. She has been involved in drama, and was a delegate for Hoosier Girls State. She volunteers at both Michigan City Public Library and Franciscan St. Anthony Memorial. Her favorite academic classes are English and Spanish, however she plans to major in Accounting, and she has applied to Indiana University, Purdue University, and St. Xavier.

Theresa Saenz is Editor-in-Chief of the Alpha Yearbook, and has played Varsity Softball for three years. She is captain of the State Championship Japanese Olympiad Team for MCHS, and is a Math tutor at the Michigan City Public Library. Upon graduation, she plans to major in Engineering. She has applied at several prominent universities, including Columbia, Stanford, Brown, Northwestern, Rose Hulman and Purdue.

Veronika Werner plans to study Biochemistry, Molecular Biology, or Biomedical Engineering upon her graduation from MCHS. Like Pollnow and Saenz, she has applied to a number of well-respected universities, including Harvard, Brown, Columbia, the University of Chicago, Boston College, Stanford, Northwestern, and Purdue. She captains the MCHS Science Olympiad Team and is also a member of the Math Team and Quiz Bowl Team. A student of both German and French, she has taken part in the German-American partnership program and attended Hoosier Girls State. She is a member of the MCHS Girls Golf team, and volunteers as a scorekeeper for Notre Dame School’s golf team. She is also a tutor at the Michigan City Public Library.