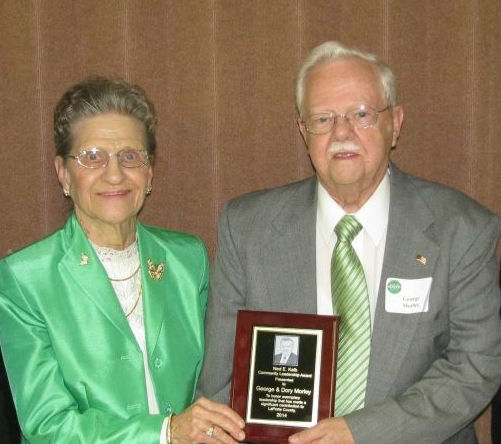 At the recent Purdue Extension La Porte County Annual Meeting at St. Mary’s Church in Otis, George and Dory Morley were announced as the recipients for the 3rd annual Ned E. Kalb Community Leadership Award. They were presented a plaque and will have their names added to the permanent plaque, donated by Dick Reel, that hangs in the Extension Office.

Both George and Dory have spent over 40 years of their lives contributing to the quality of life for the citizens of La Porte County—young and old. They have taken many leadership roles in the Farm Bureau, church, and community by creating programs, promoting them, and conducting them. As County President, George was Lead Negotiator in the building of the new Farm Bureau Building on Boyd Blvd. and later spearheaded and coordinated the building of the Log Milk Cabin in Pioneer Land at the Fair Grounds. Dory was La Porte Co. Farm Bureau, Inc. County Woman Leader for several years, and also County Information Leader for over ten years, winning the “Leader In Excellence Award”, (the state’s highest honor), 4 years in a row for publicizing Farm Bureau events and achievements on two radio stations and 7 newspapers; while George initiated a newsletter and the county's own Farm Bureau Web Site. For many years at County Fair time, Dory and George with the help of many other volunteers, headed up the events held at the Farm Bureau Milk Cabin in Pioneer Land. They embody the leadership traits and interests that Ned Kalb lived and loved---agriculture, food, youth, community, leadership, teaching, and mentoring.

“Ned served La Porte County in so many ways. He saw needs and brought people and resources together to solve the challenges, not only locally, but across Indiana and the world,” said Hugh Tonagel, current Extension Director. “Ned was a mentor to many and an excellent teacher of community development and leadership,” added Jim Jessup, a volunteer for Leadership La Porte County. “Ned, Kathryn Dearborn, and I worked several years together during the planning, organizing, and facilitating of the leadership program,” Jessup said. Monica Komasinski, Executive Director of Leadership La Porte County, stated, “The mission of Leadership LaPorte County and the impact the organization has had on the community is a lasting legacy of Ned Kalb’s vision. We are proud to honor him and to recognize good community leadership with this award.”

Nominations for the next award will be taken beginning in January 2015. For more information contact either the Extension Office or Leadership La Porte County.