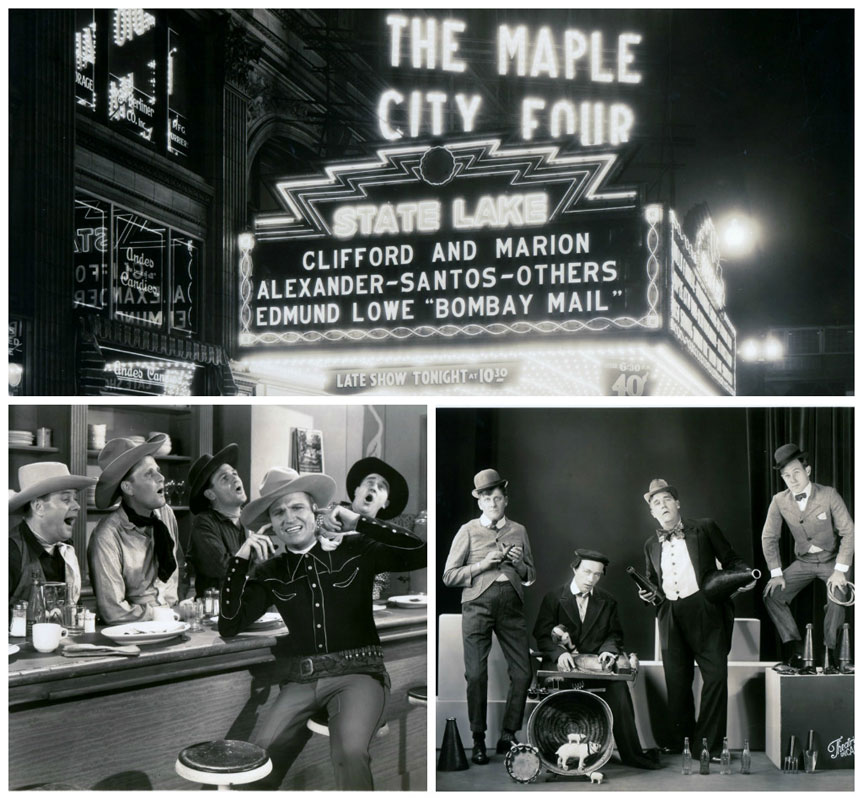 Back in the days of Radio Stars, Minstrel Shows, and Vaudeville, La Porte was home to one of the most popular singing groups at WLS Barn Dance and NBC out of Chicago. One day in October 1924, 3 fellows were sitting down to a meal here in La Porte, when they heard of a singing audition for the Elk Lodge’s annual talent show. They joined in and won a spot on the show, billed as the Maple City Four. Their first radio experience came in 1926, doing some campaign spots. They auditioned for WLS and were signed. They were as well known for their crazy antics and goofy costumes as they were for their wonderful harmonies, which led them to be called, “the four Marx Brothers of radio.” They were used by companies to showcase their products. They extolled the virtues of everything from Kellogg’s Cereal to Caterpillar Tractors. In 1937, they answered the call to Hollywood. They performed as the singing cowpokes in 2 films starring cowboy great, Gene Autrey, and one starring none other than Roy Rogers.

In 2007, many recordings, photos, scrapbooks, and other memorabilia was donated to the La Porte County Historical Society. Honoring the Maple City Four has become the Spring 2015 exhibit at the museum. Rare copies of “Whispers in our Maple Tree,” the yearbook put out by the MC4 Fan Club will be shown, as well as original songbooks used by the “boys.” Also featured will be snapshots on location in Hollywood, showing Trigger himself!

Members of the original Maple City Four were Fritz Meissner, tenor, Pat Petterson, bass, Art Janes, baritone, all from La Porte, and Al Rice, lead, from New Jersey. In 1941, Art retired for health reasons and Charles Kerner joined the group. The display will be up for all of March, April and May.

The Museum is located at 2405 Indiana Avenue (US#35) at the south entrance to La Porte and is handicapped accessible. Telephone (219) 324-6767 or email: info@laportecountyhistory.org for more information.