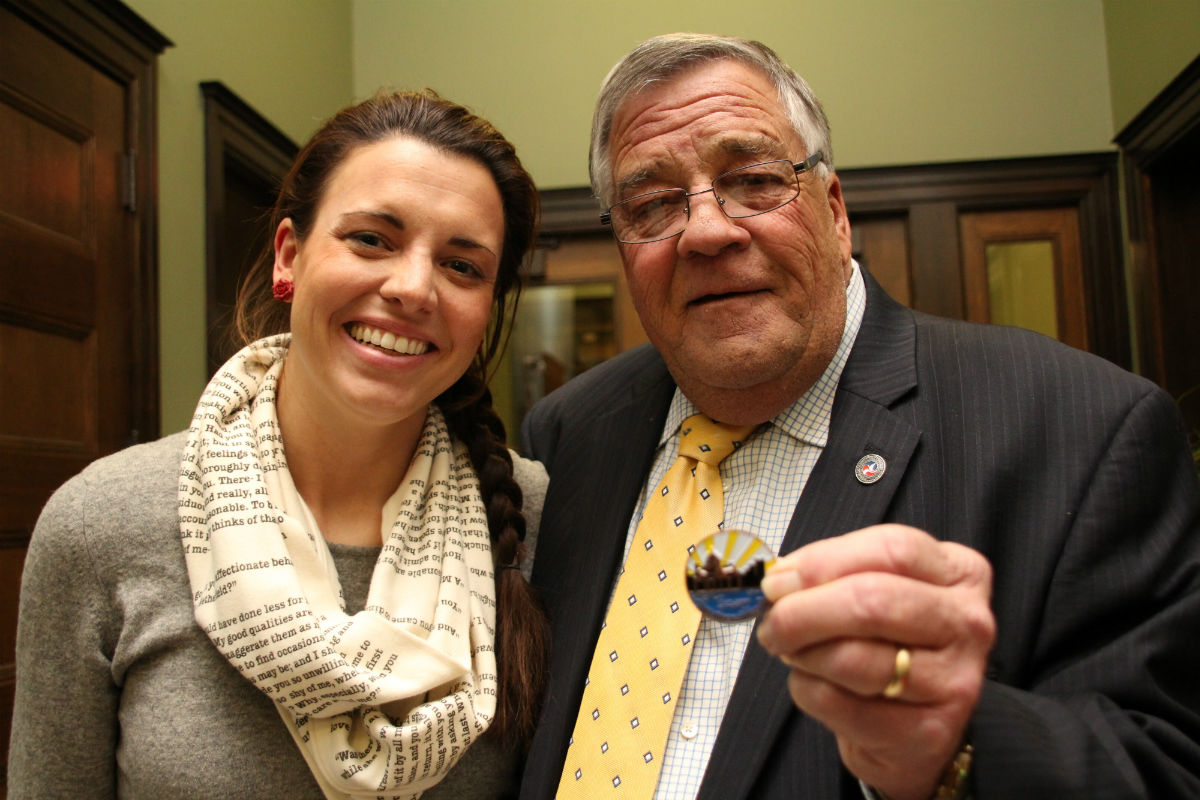 On the evening of December 8th, the Greater La Porte Chamber of Commerce gathered to celebrate the retirement of Mike Seitz who has been with them for 15 years. Speeches were written, toasts were prepared, but when the moment came, formality was immediately forgotten.

“This says a lot about what Mike has done for the community and the relationships he’s built,” said Cheryl, his wife.

“It’s sad,” said Drew Gesse, Director of Marketing and Communications for the Chamber. “But at the same time I know he’s done a lot for the community so it’s exciting to celebrate and look back at things.”

Something Gesse will always remember about Seitz is the conversations they would have about IU, the college Gesse attended. Seitz loved to swap stories and would stop by at the end of the day just to chat.

IU was also a bonding topic for Seitz and La Porte Mayor Blair Milo. “Mike is a huge Hoosier fan and I am a Boilermaker so we like to give each other a bad time. It’s all good-natured really. He has his ringtone set to the IU fight song so there would be times during meetings that his phone would go off. The IU fight song would start playing, and I would take that as a challenge and I would sing the Purdue fight song over the top of his ringtone.So we have a longstanding joke with that.”

“It’s interesting,” said Chamber Director Thaddeus Cutler, “Mike has been a fixture in this position so long that it feels a little strange not having him here.”

Seitz put La Porte on the map. He expanded partnerships with local businesses and started new ones as well. The Chamber became accredited under his watch. They started the Political Action Committee to keep voters updated on their candidates.

“Up until Mike took over, we didn’t hear anything from the Chamber,” said Rich Mrozinski, 8 year County Council member, and current Commissioner-Elect. “He brought around so many events and creates big turnouts. He doesn’t sit still, he’s always got something going on, and it’s good for the county.”

Seitz gave the Chamber a voice that they had not previously had. He reached out to surrounding Chambers to gather more expertise and share his own. Fostering relationships is a valuable resource, one that Seitz encouraged members of the Chamber to pursue. Presidents from neighboring came to his retirement party to wish him well and to thank him for his advice.

“We all work together pretty closely,” said Kyle Hannon, President of the Greater Elkhart Chamber of Commerce. “We’re colleagues, we’ve formed a regional coalition. Mike’s always been a great participant, a great contributor. He’s a champion for La Porte but also for the greater region.”

Seitz hopes to see the Chamber continue to be a voice in the region and to work for the interests of Business.

“I’ve worked with a great board of directors and a great staff. I feel fantastic about the way the community accepted me when I first came here. We’ve started some things that were really fun. It’s been so enjoyable here.”

Seitz said he would miss the Greater La Porte Chamber of Commerce, but he can leave confident that they are in good hands. He has seen it himself.