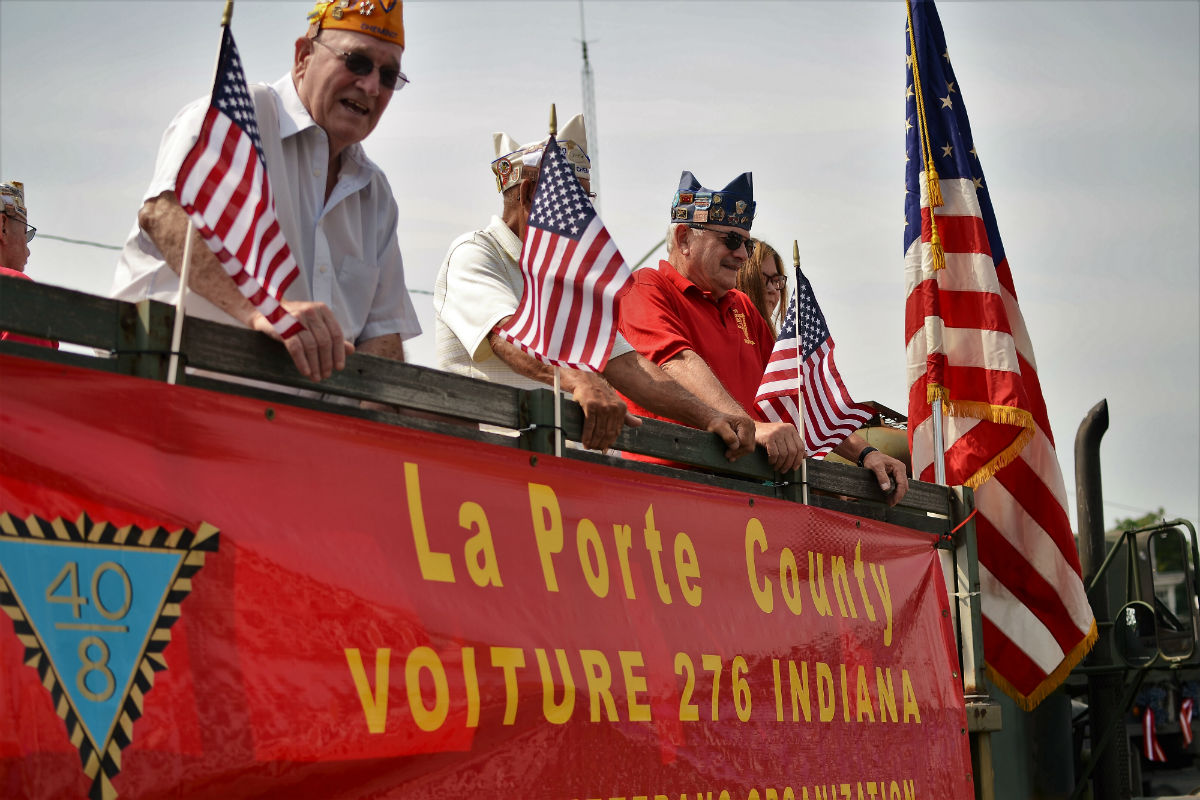 The City of La Porte swelled with patriotic pride this year as the La Porte Jaycees presented the annual Fourth of July Parade, inviting area residents to “Spend the Fourth in La Porte.”

The largest Independence Day parade in the state, the La Porte parade sees between 50,000 - 80,000 people lining the 2.5 mile stretch of Lincolnway Avenue as over a hundred entries march through the historic downtown area, to the sounds of bagpipes and marching bands.

This year’s parade theme was “The Spirit of America,“ and in keeping with that theme, the parade had something extra to kick it off- the return of a military fly-over, as two A-10 “Warthogs,” piloted by members of the 122nd Fighter Wing of the Air National Guard out of Fort Wayne roared along the parade route, to the thrill of children and adults alike.

“This is the largest parade in the state, has been for many, many years,” said Joy Zigler, Vice President of the La Porte Jaycees. “We have a lot of great entries: local businesses, area fire departments and many others. Our Parade Grand Marshal this year is Jack Olesker and of course we also have our local dignitaries, including Mayor Blair Milo and State Representative Jim Pressel (R - Rolling Prairie).”

Brad Rauschenbach, Management Vice President of the La Porte Jaycees, was also excited about the return of the A-10 “Warthogs,” and said, “We’re glad to have the fly-over. We get a lot of attention from that and we’re excited to have that return.”

The city also enjoyed another long-standing tradition, being named “Capital for the Day,” as it has each year since World War II, with Governor Eric Holcomb recently presenting the proclamation to State Rep Jim Pressel.

“The parade is a long-standing tradition here in the Hub of Awesome, or as we’re calling it today, the ‘Capital of Awesome,’” said La Porte Mayor Blair Milo. “The Jaycees do an amazing job. It’s a lot of effort to coordinate this and bring it all together each year. We love having so many different elements of our community, so many spokes of the Hub of Awesome to come together and make this happen.”

But Milo hoped that people would also take a few minutes in between the cookouts and fireworks to reflect on the meaning behind the holiday.

“We love all the celebrations, and hopefully it provides an opportunity for people to not only celebrate the red, white and blue, but to reflect on why we celebrate this holiday. The history that this day represents. Our country is unique: built not on geography or bloodlines, but on an idea; the idea that we are a people with unalienable rights. I hope we take some time to reflect on that today,” said Milo.

For many families, the parade is a long-standing tradition that they look forward to every summer. Martha Almaraz has lived in La Porte for twenty-one years and has never missed the parade in the entire time she has live in the “Hub of Awesome.”

“I love it!” said Almarez. “We’ve come here each year, ever since we moved here to La Porte. I love the fire trucks. And the fly-over was so exciting!”

The parade is just the beginning to the day’s festivities, followed later in the evening by the annual 4th of July Fireworks celebration at the La Porte County Fairgrounds. Gates set to open at 6pm, and fireworks to begin at 9:30pm.

More information for the event can be found on the La Porte Jaycees website http://laportejaycees.org/4th/.