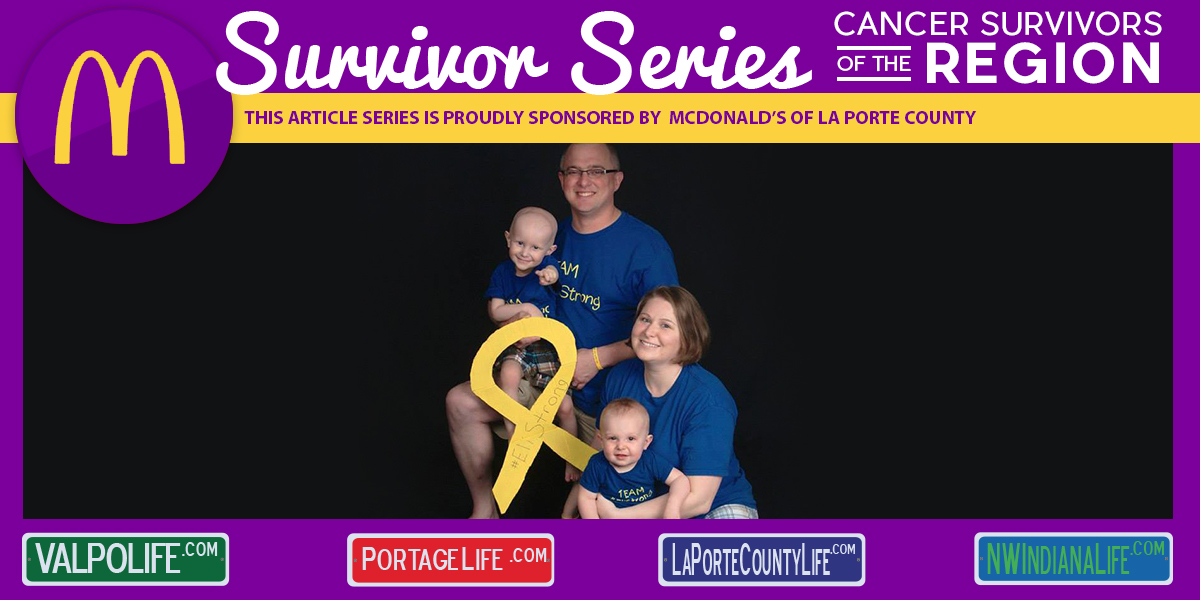 In late 2014, Amber Alexander got news that no parent ever wants to hear - a CT scan of her son, Elijah, revealed a 3.6 x 4.4 cm mass in the fourth ventricle of his brain, near his cerebellum and brain stem.

This was the day after Thanksgiving and by Friday, November 28, 2014, Elijah underwent surgery at the University of Chicago's Comer Children's Hospital and the tumor was completely removed with clean margins. Eventually, it was discovered that Elijah's tumor was a medulloblastoma, a very aggressive, malignant form of cancer that would require follow-up treatment with chemotherapy.

“Eli had clean margins so they were able to remove 100% of it during surgery,” Amber said. “Then, he recovered in the hospital for about two-and-a-half, almost three weeks. He had to re-learn how to talk and how to walk, and when he first came out he didn’t recognize or know us. That was really hard.”

Word of Eli’s condition spread and the outpouring of support, prayers, and well-wishes that Amber and her husband, Jeff, received was incredible.

“Immediately, friends and family were calling and sending us messages,” Amber described. “Our pastor came and our deacon came, and obviously our family came up to Chicago. One of the nurses told me to start a Facebook group and I started posting updates on a page called ‘Eli Strong.’”

After Amber had created the page, news of Eli’s battle with cancer spread quickly and Amber started to receive words of encouragement from around the country. People she had never met, and likely would never meet, were conveying their thoughts to the family.

“We took pictures and kept people in the loop about what was going on and we had people coming out of the woodwork,” she said. “People we didn’t know were messaging the page writing prayers or sending messages like, ‘We know what you’re going through, keep your head up, stay strong and keep moving forward.’”

“The nursing staff at the NICU (neonatal intensive care unit) save kids’ lives so they’re really dedicated to not only the kids but to their families too.”

Once Eli recovered, he was going to have to start chemotherapy; on the day after Christmas. Unknown to Amber, her cousin had started collecting Christmas gifts for her children.

“We had, of course, been extremely busy and she knew that we probably didn’t have a ton of time to do that so they came over and delivered an unbelievable amount of Christmas presents to Eli,” Amber said. “It was probably the best Christmas he had ever had!”

“On the Sunday that he was supposed to start chemo Eli wasn’t feeling well, so we weren’t able to get to church. We happened to be home when a car pulled in our driveway that I didn’t recognize. I came out to the front porch and this woman walked up and said, ‘Hey, I read about your son on Facebook and I crocheted this blanket for him. I know when people are in chemo that their body temperature gets colder, so I want you to take this to the hospital to help keep him warm.’ I never met the woman before and I was crying on the front porch. It was incredible.”

One of the big support systems that Amber was introduced to was through the hospital, which linked her up to a group of other parents whose children also had medulloblastoma.

“I connected with a lot of other parents mostly through Facebook,” Amber said. “We all shared our journeys together and we’re still connected, and support each other today.”

Along with all of the individual support, organizations like the Portage Fire Department, who held a fundraiser for Eli, reached out to Amber and wanted to help alleviate the expenses that built up through treatments and the travel costs of routinely going to Chicago.

“One day one of the fireman came to see me and asked me if I had a minute,” explained Amber. “He said, ‘We were going to do a fundraiser for our 50th Anniversary and we thought about growing our hair out for a year and then shaving our heads for Eli, and raising money for your family’s medical and travel costs.’ I just started crying because the medical costs, the travel back and forth to Chicago, the parking - it all adds up and it was such a relief.”

The support and outreach that Amber and her family were on the receiving end of throughout Eli’s battle has been nothing short of amazing. Amber has taken to heart all the positivity that she and her family has received throughout Eli’s battle. #EliStrong has become synonymous with his fight and now Amber is giving back the love and thoughtfulness that she has been on the receiving end of over the last three years.

“Before this happened we weren’t aware of how child cancer can affect people. When it’s your child you take it to a deeper level. Now I don’t hesitate to say a prayer or try and help someone going through similar circumstances. Even if I don’t know them, reach out because it helps.”

Amber encourages anyone going through a similar battle - whether it’s you or your child - to share their story. The love and encouragement that can be conveyed by a community, in-person or online, is an incredible thing to experience.

“I would encourage anyone facing cancer to reach out to tell the world what they’re facing and not to be scared to share their story because help and support is out there.”

Eli still travels to Chicago for treatment but he recently hit a milestone and is looking forward to starting kindergarten soon.

“He actually just passed his two-year MRI scans so he was going every three months for the last two years, and he recently graduated to going only twice a year for the next couple years. He also starts kindergarten on Monday, which is a huge blessing. I’m so grateful that I get to walk him to school on his first day. Those are things that I didn’t dare think about when he was in the hospital and now I’m just ecstatic.”