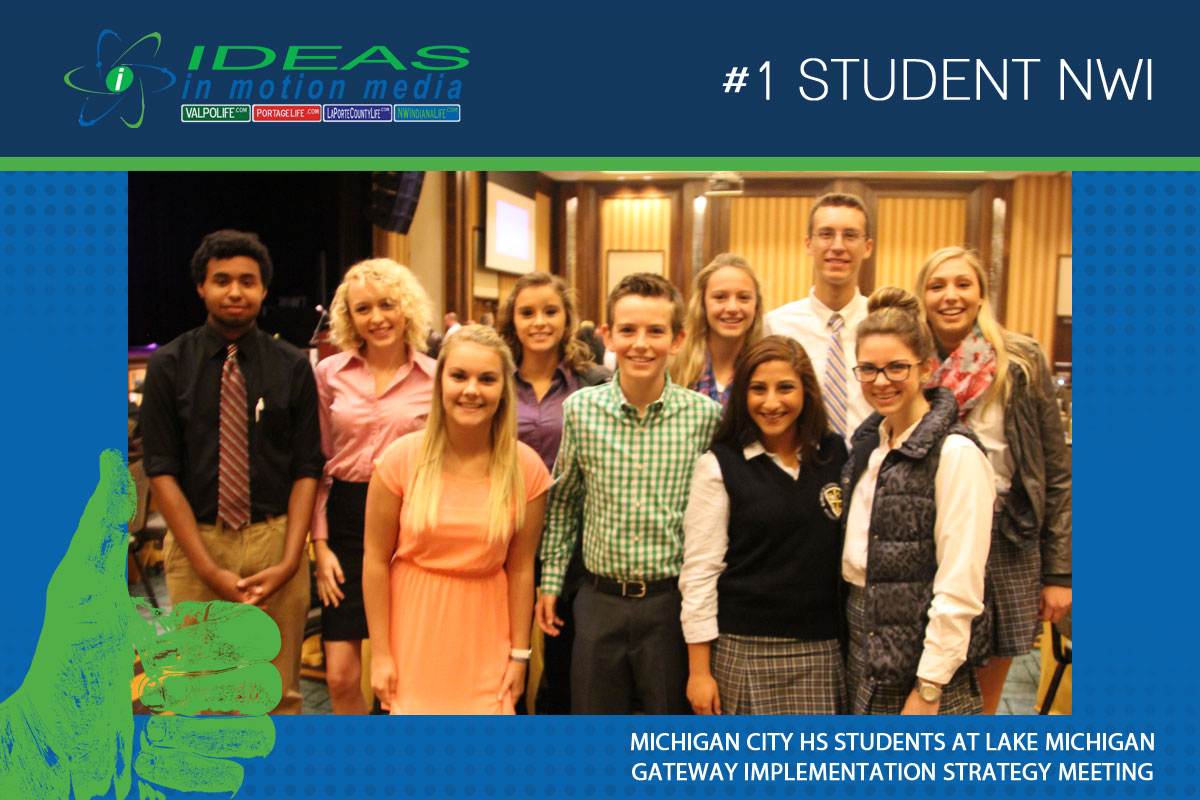 Tommy Callaghan is LaPorteCountyLife.com's #1StudentNWI representative at Michigan City High School. This month, Tommy recaps his experience attending the Michigan City NOW breakfast earlier this month with other MCHS students as well as students from Marquette High School. He discusses how the youth have embraced the Lake Michigan Gateway Implementation strategy, now the outlying document to ensure the city has a prosperous future.

For years, Michigan City High School has had few causes to be proud of themselves or their city. That is, until recently. MCHS has made great adjustments within the past few years, including academic honors classes for freshman and sophomores, advanced placement classes for juniors and seniors, great new faces in administration, and overall, happy students.

Now, as a city, Michigan City is also moving forward thanks to not only the city leaders, but the citizens. On Wednesday, October 8, community organization Michigan City NOW invited many to Blue Chip Casino for a meeting to discuss the Lake Michigan Gateway Implementation Strategy. Michigan City NOW's mission is, “To work with all stakeholders to create the best possible future for the citizens of Michigan City and its visitors.”

At Blue Chip, Mayor Ron Meer, Councilman Rich Murphy, City Planner Craig Phillips and Ric Federighi of WIMS Radio, all spoke detailing the crowd on exactly what the Lake Michigan Gateway Implementation Strategy would do. Michigan City will now not only be a spot on the map, but a place everyone will be proud to call home. According to the LMGIS, it could bring in about $15 million dollars, sustain about 3,500 jobs, and invest over $22 million dollars in lakefront attractions, street and trail improvements and critical infrastructure. Through the Gateway Strategy, Michigan City will become Indiana’s great lakefront destination community.

Normally, plans like this face lots of opposition, however, this community is nearly all in full support. Citizens stood up just to voice their approval at the end when there was an opportunity to ask questions. The only question that everyone has is, “Where is the money for all this coming from?” After the meeting, myself and others asked Mayor Meer for the answer. He responded, “All the revenue our Northside has earned will be used for the renovations that will be occurring.” He also said that the money will be coming from both private and public funding.

On October 21, the City Council responded to the wide-span support of the strategy, unanimously approving a resolution supporting it. Through the LMGIS, Michigan City will be a place that the residents will not only be proud of, but visitors will have a great time in.

Back at Blue Chip, not only did adults from organizations, newspapers, and citizens all show up to participate in the LMGIS meeting, but many students, myself included, were in attendance. As students from both Michigan City and Marquette High Schools listened to the speakers present, it became increasingly important that we were not just there to be there, but participate and help this strategy thrive in the future.

Audra Peterson, director of the A.K. Smith Career and Technical Center, said, “We need to engage the young people to participate in this project," adding “We have intelligent, bright and energetic people we want to keep in this community.”

This is very true. The kids in our high schools right now are working to not just get good grades, but make it in the real world. With this plan, it is highly likely that future citizens will stay and develop this great city. Many community members and corporations have helped to get this plan on track, and their hard work is going to pay off.

The food provided by Blue Chip was delicious, students were taking their notes, paying attention, and having a great time in general. As a student, I know how boring lectures can be sometimes, but at this event, there was no reason for anyone to be bored. Our city is on the rise and the next generation is here to help keep the momentum.