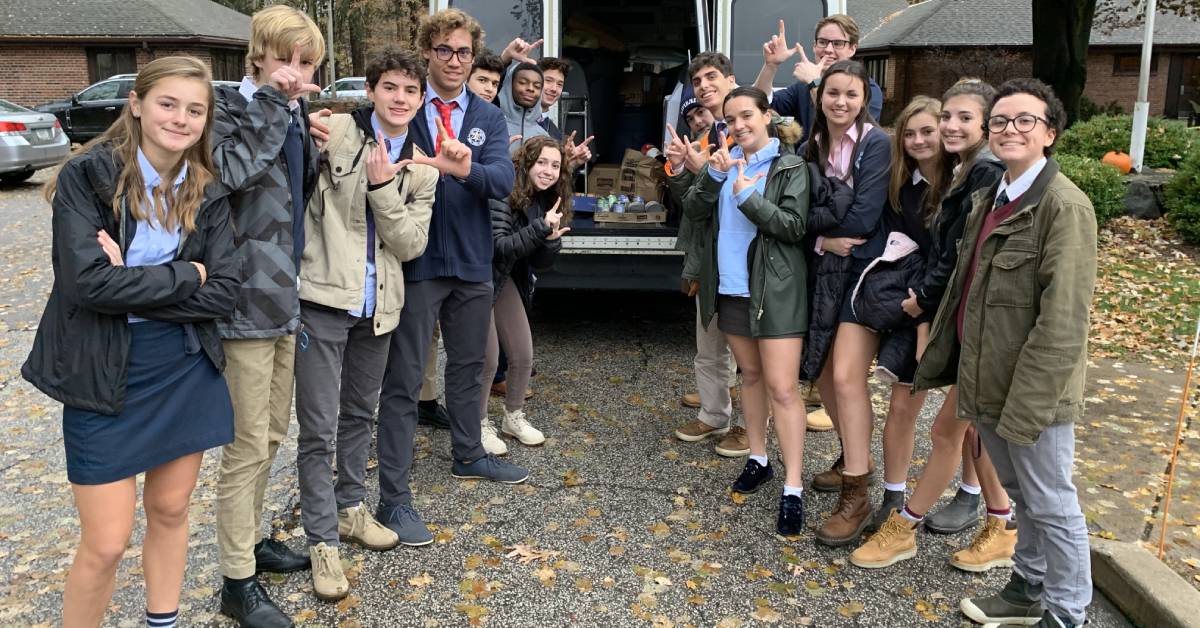 Service is, and will always be, a large factor in La Lu’s culture. Offering a helping hand is always the La Lu way and whether it’s giving food or clothing to a drive. Giving back, even just a little, can cause a great impact and help the greater good of the community, and at La Lu , all are encouraged to take part.

Headed by La Lu’s Servium Prefect, Matthew Shuck, the school has collected about 1400 items of food to feed 14 families over the holiday season. The Service Council held two food drives in the past month and a half to give to Catholic Charities. Aside from the food drives, Shuck is also holding a clothing drive in hopes to collect winter coats and warm clothing to give away to the Center for the Homeless.

The Service Council is taking all the food, and toiletries, to the Catholic Charities to make for a great holiday season for as many as they can!

“This is one of my favorite ways to show appreciation for all people, and I could not be more pleased with how the students have participated,” said Megan Beck, Director of Faith Exploration at La Lu.

La Lumiere encourages the idea of community through tradition and diversity. As a small community consisting of students and faculty from countries all around the world, celebrating the universal holiday season is extremely special.

The small, close-knit community at La Lu comes together as a family to celebrate with a classic Holiday Dinner. Just like Thanksgiving dinner, Christmas Dinner is very inviting to all. On the dinner day, students join the boarders, faculty, and staff in a big meal full of holiday classics like ham, turkey, mashed potatoes, casseroles, and an endless amount of desserts.

The special thing about the Christmas Dinner is that there are always a few surprises for the campus and faculty kids. For example, the Hospitality Council treats the kids with extra, early gifts! The Prefects sell candy canes to send to friends, and anyone else you wish to send a treat to, and the money raised goes towards buying gifts for the kids. This year we will also have a few special guests at the dinner, including Santa Clause, Rudolph, and two of Santa’s elves!

Christian Clark is originally from Hinsdale, Illinois but grew up in Glen Ellyn, Illinois. He is La Lu’s Sacristan Prefect, and his job is being responsible for maintaining and encouraging spiritual life for the community. Along with being Sacristan Prefect, Clark is also Captain of the Crew Team. Clark hopes that his leadership by example rubs off on others and that he can continue to help people strive to be the best they can be.

La Lu takes up a lot of time for the students, but in the summer, Clark is always working as a golf caddy at Long Beach Country Club. He also volunteers at Michiana Day Camp as a counselor.

As a child, and every so often, Clark has been in and out of the hospital. His frequent sickness helped him to take on an adult-like mindset, which was his only way to know what needed to be done for his own health. It also taught him to be more mature, growing up a lot quicker than most. Clark realized that despite his childhood revolving around being in the hospital, the worst is over, and it is only uphill from here on out.

“I wish that I knew at a young age that everything takes time, and that results don’t appear overnight. I was a very impatient child which caused me to be frustrated a lot of the time. I had a very quick temper. I wish I knew how to turn my pain into inspiration,” he said.

Currently, Clark finds himself always wanting to live and enjoy life in all the ways he can. He enjoys fashion, shopping, and traveling with friends. He loves listening to music, finding new artists, working out, and running.

Many can agree that English teachers are some of the best teachers you will ever learn from, and Enrique Galvan-Anderson is no exception. Galvan-Anderson was born in Chicago and raised in Wisconsin, but his family is from Mexico. He teaches sophomore English and Literature and junior and senior Hyphenated America, as well as Writing about Film seminars. Aside from being an English teacher and Advisor, Galvan-Anderson coaches Cross Country and proctors a student-run elective, Film Club.

Galvan-Anderson is not only a teacher, but he is also a student. Currently, he is enrolled in graduate school, working toward his master’s in Education and Educational Leadership.

Outside of school, Galvan-Anderson enjoys working out and keeping up with the latest health trends. He loves writing and does a lot of that in his free time but his passion is, without a doubt, film. He loves film in all ways –how they are produced, the shots and interpretation of scenes, who is acting, how the story comes alive in terms of the director, and overall analyzing.

Going from Chicago to Wisconsin, and then moving to New Orleans for college taught Galvan-Anderson a lot about his perspective. He came to the understanding that it is important to learn about new places and to bring the aspects of where he has been into his present life. He hopes to show others that it is always important to try their best not to dwell over hardships or mistakes.

“Try to live your life with no regrets because it shapes who you are. Look at life like it is one large learning process that shapes your individuality,” he said.

He tries to keep a positive outlook on life and that is what he is always trying to teach his students because, in the end, that is what will make you the happiest.