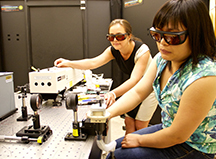 Spinach gave Popeye super strength, but it also holds the promise of a different power for a group of scientists: the ability to convert sunlight into a clean, efficient alternative fuel.

Purdue University physicists are part of an international group using spinach to study the proteins involved in photosynthesis, the process by which plants convert the sun’s energy into carbohydrates used to power cellular processes.

“The proteins we study are part of the most efficient system ever built, capable of converting the energy from the sun into chemical energy with an unrivaled 60 percent efficiency,” said Yulia Pushkar, a Purdue assistant professor of physics involved in the research. “Understanding this system is indispensible for alternative energy research aiming to create artificial photosynthesis.”

In Pushkar’s laboratory, students extract a protein complex called Photosystem II from spinach they buy at the supermarket. It is a complicated process performed over two days in a specially built room that keeps the spinach samples cold and shielded from light, she said.

Once the proteins have been carefully extracted, the team excites them with a laser and records changes in the electron configuration of their molecules.

“These proteins require light to work, so the laser acts as the sun in this experiment,” Pushkar said. “Once the proteins start working, we use advanced techniques like electron paramagnetic resonance and X-ray spectroscopy to observe how the electronic structure of the molecules change over time as they perform their functions.”

Photosystem II is involved in the photosynthetic mechanism that splits water molecules into oxygen, protons and electrons. During this process a portion of the protein complex, called the oxygen-evolving complex, cycles through five states in which four electrons are extracted from it, she said.

The international team recently revealed the structure of the first and third states at a resolution of 5 and 5.5 Angstroms, respectively, using a new technique called serial femtosecond crystallography. A paper detailing the results was published in Nature and is available online. In addition to Pushkar, Purdue postdoctoral researcher Lifen Yan and former Purdue graduate student Katherine Davis participated in the study and are paper co-authors.

“The trick is to use the world’s most powerful X-ray laser, named LCLS, located at the Department of Energy’s SLAC National Accelerator Laboratory,” said Fromme in a statement. “Extremely fast femtosecond (one-quadrillionth of a second) laser pulses record snapshots of the PSII crystals before they explode in the X-ray beam, a principle called ‘diffraction before destruction.’”

While X-ray crystallography reveals structural changes, it does not provide details of how the electronic configurations evolve over time, which is where the Purdue team’s work came in. The Purdue team mimicked the conditions of the serial femtosecond crystallography experiment, but used electron paramagnetic resonance to reveal the electronic configurations of the molecules, Pushkar said.

“The electronic configurations are used to confirm what stage of the process Photosystem II is in at a given time,” she said. “This information is kind of like a time stamp and without it the team wouldn’t have been able to put the structural changes in context.”

The National Science Foundation and Department of Energy funded the Purdue team’s work.