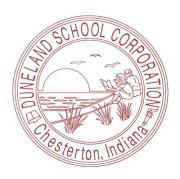 School lunches are healthier and better than ever. With the implementation of the new regulations set by the United States Department of Agriculture (USDA) and strict specifications for food supplied by our government commodity program, American students are eating highly qualified products that are made and grown in the United States.

The beef products are 100% beef. Many of you may remember the “pink slime” accusation made by one of America’s favorite chefs. The beef that is supplied by the USDA for the lunch and breakfast programs has absolutely none of that added.

By the beginning of the 2014-2015 school year, all breads and grains that are served in school lunches must be at least 51% whole grain. Duneland Schools are already compliant with that regulation. The process of lowering sodium in foods that are served has already begun, although the new regulations are not in effect until next school year. More fresh fruits and vegetables are being served. Lower fat dairy products have taken the place of whole or 2% milk.

It has been difficult at times convincing students that their lunches and breakfasts are better for them because they are used to white bread, pizza crusts and more than likely are still eating those items at home. It’s been an education process in healthy eating that must be followed through even outside of school.

Currently under discussion at the USDA is COMPETETIVE FOODS. These are commonly called “ala-carte” items. The proposed nutrition standards for these items are: Any food sold in schools must –

Be a “whole grain-rich” grain product; or Have as the first ingredient a fruit, a vegetable, a dairy product, or a protein food; or Be a combination food that contains at least ¼ cup of fruit and/or vegetable; or Contain 10 percent of the Daily Value (DV) of one of the nutrients of public health concern in the Dietary Guidelines for the Americans (calcium, potassium, vitamin D, or dietary fiber).

Saturated fat: Less than 10% of calories and No Trans fat

Less/equal to 35% of weight from total sugars in foods

School lunches truly are healthier and better than ever!!

Kay Nallenweg is the director of Food Services for the Duneland School Corporation.