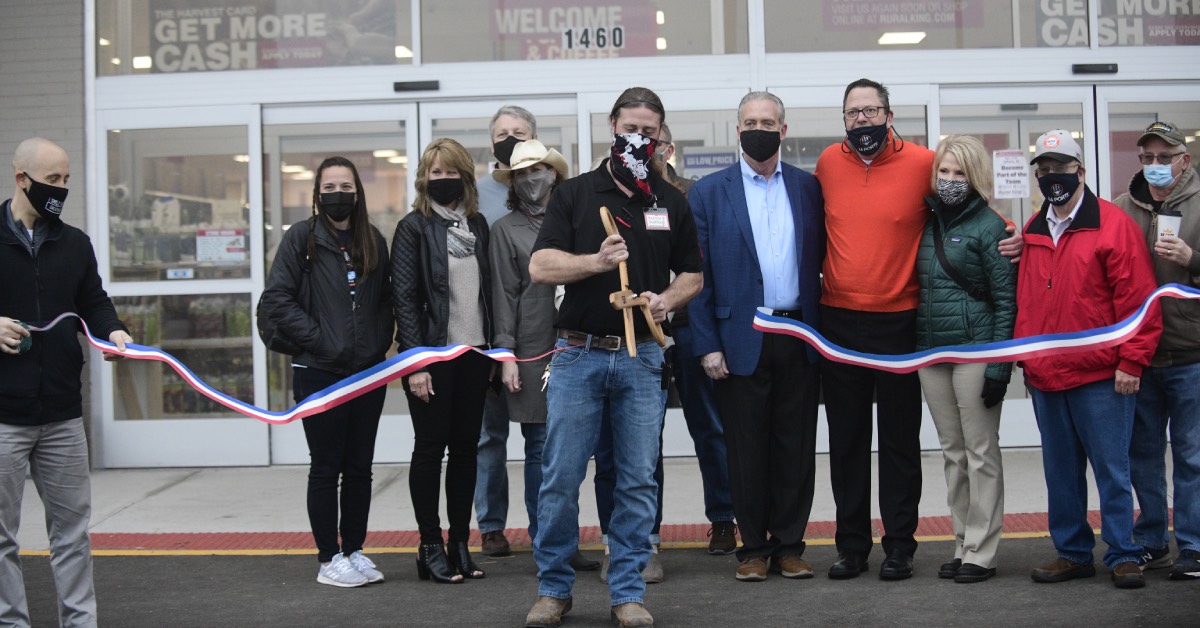 The City of La Porte had an exciting morning when the Rural King store held their grand opening. Located in the Maple Lane Mall on 1340 W. State Rd. 2 in La Porte, the store had customers lining-up starting at 4 a.m.

Jacob Knoll, a La Porte native and resident of South Bend, was the first in line. While he was there for ammo, he said he would be returning to this location despite having a closer location in Niles.

“This store has a big selection and it’s a lot bigger,” said Knoll. “I used to go to Kmart here years ago, so this is nostalgic for me too.”

Rural King, also known as RK Holdings, LLP, is known as America’s Farm and Home Store, a general merchandise store that provides a broad range of necessities, essential goods, food, feed, seed, and other farm and home products. Rural King started in Mattoon, Illinois in 1960. Since that time, Rural King has added over 129 stores in a thirteen-state area.

Jonathan Reese, the La Porte store’s general manager, shared his excitement for the ribbon cutting. He has worked for Rural King for the past four years, has been a lifetime customer himself, and has opened stores in seven different cities.

“We are here for the community,” said Reese.

“We have a lot of different items that we went directly to the manufacturer to produce for us so we can pass those savings on to our customers,” said Reese.

Mayor Tom Dermody could not contain his excitement either. He cheered for and greeted everyone personally who were waiting in line prior to the ribbon cutting.

“Since my campaign and then coming into the administration, I had heard that we need to develop the west side. Rural King came in here and made that happen.” said Dermody. “I never thought I’d be so excited to see a parking lot refurbished. All of the other businesses, like Kabelin [Ace Hardware], a family-owned business here in La Porte, are going to benefit. We have the opportunity to have three to five thousand people a day on the west side, and our goal is to then keep them here and have them take a tour around La Porte to see what’s happening with our natural resources like our parks.”

Mayor Dermody has a vision for La Porte, and the opening of this all-new store is a step in the right direction for that future.

“We are going to be thirty-by-thirty, meaning thirty thousand residents here by 2030 because of activity like this and what Bert Cook of La Porte Economic Advancement Partnership is doing,” said Dermody. “I am excited to say within the next year you are going to hear a lot more of other things that are coming here to La Porte. This truly is the place to be.”

Brian Chalik, president of the City of La Porte Redevelopment Commission and a life-long La Porte resident, echoed the mayor.

“The redevelopment commission, the urban enterprise association, and the city council all have worked in partnership to make this a reality,” said Cook. “We worked very hard to find a retailer to open in our community to not only open the store here, but to renovate this entire section from the building to the parking. Rural King really has done a great job.”

For more information on what’s currently in development and what’s coming soon, head to the La Porte Economic Advancement Partnership’s website at https://laportepartnership.com.