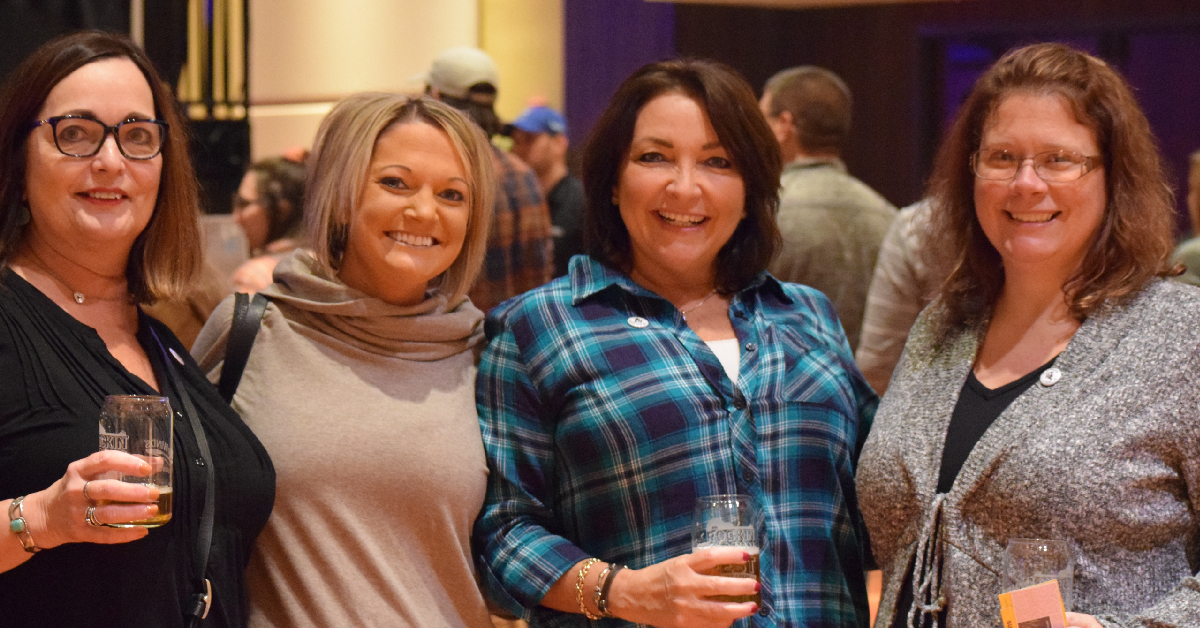 Beer, food, football, and live music is all you need on an October Sunday evening. For the past four years people all over Michigan, Indiana, and Illinois have come to the Silver Creek Event Center at Four Winds Casino in New Buffalo, Mich., to get a taste of the season at the Rockin’ Brew Fest. Fall beers, summer beers, lager, IPA, stout, cider, you name it, it was on the line up for the 20 breweries in attendance. More than 1,200 people attended the event, as they do every year, and the event center was nothing but chill vibes and happy faces.

The Rockin’ Brew Fest is a favorite for both Four Winds staff and the community alike. It could be the world-famous sausage from Chef Martin, or the opportunity to try some brand new beers at a super great price, but either way, this event is a year in the making. According to Brant Coulter, Director of Food and Beverage at Four Winds Casino, they’ll already begin planning next year’s brew fest just a couple days after the end of this year's fest.

“It’s a great time of year to get a wide variety of what [attending breweries] do and kind of showcase those beers,” Coulter said. “We look forward to this all year. It’s exciting and it’s the culmination of a lot of effort from a lot of folks making it smooth and a lot of fun.”

The brew fest began as an opportunity for Four Winds to work with some of the local breweries like Tapestry, Watermark, Sister Lakes, Round Barn, Silver Harbor, Green Bush, Virtue Cider, and Saugatuck. When word got out about how much people were loving the brew fest, breweries from all over began signing up.

“The breweries love doing this event, especially the ones who do a lot of outside gigs and are always in the rain or the snow or the wind because it’s indoors,” Coulter said. “Here, whether it’s rain or shine it’s going to be a good time.”

Every year the brew fest features live concerts from tribute bands. This year featured Free Fallin, a Tribute to Tom Petty, and Captain Fantastic, the Magic of Elton John. According to Coulter, last year featured a Bruce Springsteen tribute band that had the crowd more excited than ever.

“The best part about this event is the entertainment we do. Everybody raves about that because instead of just being a beer festival with some music playing in the background, we always have great live bands,” Coulter said. “People want to make sure that of all the brew fests they go to in the area, this is the one that they gravitate to the most because we have a roof, live music, and everything else we do.”

As the Food and Beverage Director and a beer lover himself, Coulter tries to feature as many local brands as he can at Four Winds because it’s all about being a part of the community and taking care of their own.

“We try to feature as much local product as we can because we have a great wine industry here and a beer industry that has exploded since we started here,” Coulter said. “As soon as we put out the sign-ups for the breweries, they’re there right away because they all want to be a part of this awesome event.”

Beer is a common ground that can bring the community together, which is why this is Coulter’s favorite event. Seeing how something so simple can bring a diverse amount of people together makes it all worthwhile.

“It’s like a big family, seeing all of the folks from the community that are beer lovers come out and support the local breweries,” Coulter said. “This is one of those events that the vendors tend to have more fun at than some of the guests because they get to hang out with their fellow brewers that they don’t always get to see and it kind of helps keep the whole brewing community moving forward.”

Stay on the lookout for next year’s brew fest as it’s sure to be bigger and better than ever.