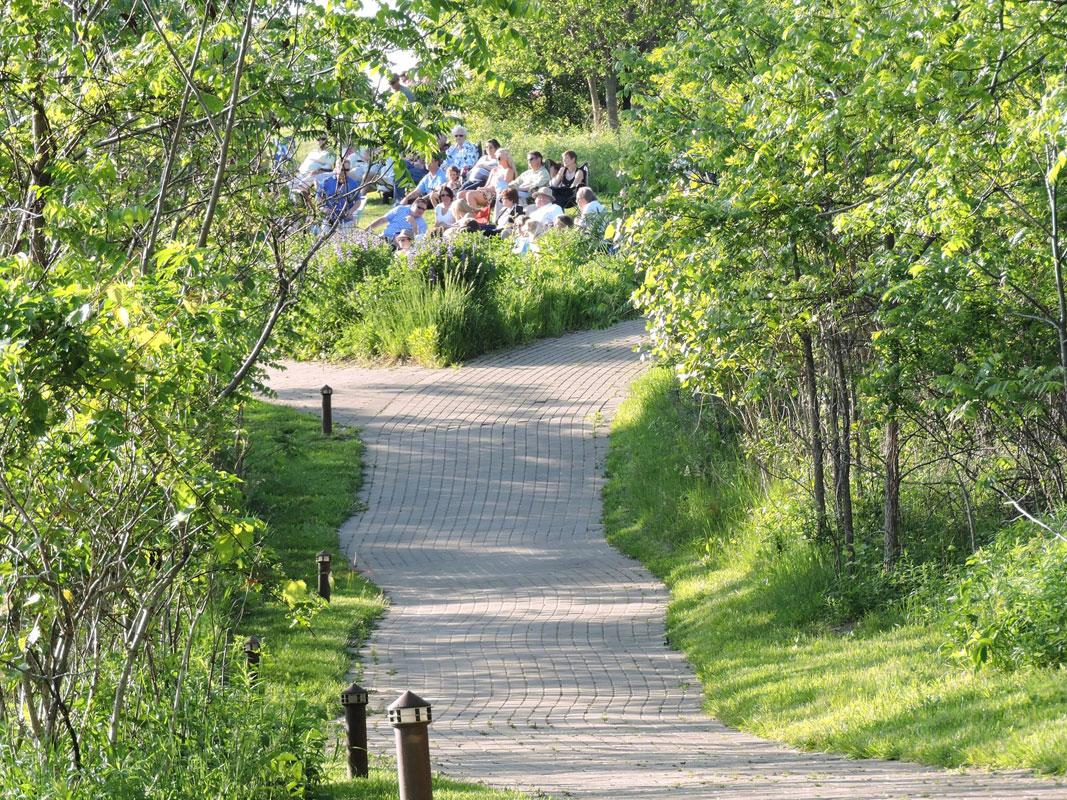 Efforts to improve biodiversity and protect water quality at the Coffee Creek Watershed Preserve in Chesterton are underway the installation of more than 615 trees of various species and sizes before the end of the year -- depending on weather conditions.

Restoration efforts conducted since September 19 to prepare for the tree planting included controlling reed canary grass, known by some gardeners as “ribbon grass,” that is taking advantage of canopy openings being created in the forest by dead or dying ash trees. Ironically, another invader -- the emerald ash borer – is killing the more than 1,600 ash trees that exist in the Preserve.

“This project is in complete alignment with the preserve’s core mission statement of maintaining and enhancing the biodiversity of the preserve,” said Rafi Wilkinson, stewardship manager for the Coffee Creek Watershed Conservancy (CCWC), owner of the preserve. “On a daily basis I see the effects that invasive species can have on the land and the plant communities that exist there. It cannot be stated strongly enough of how much better the preserve will be with this work completed,” said Wilkinson.

Certain sections of the prairie bordering the wooded areas will also be mowed to control invasive shrubs like multiflora rose and autumn olive. Trail users may see the contractor conducting their work and will want to be cautious of equipment and personnel who will be traversing the restoration areas, which are mainly centered in the middle of the preserve.

Tree-planting efforts should begin the first week of November, including 500 bare-root saplings, 100 containerized trees, and 15 larger balled and burlapped trees. Species will be installed according to their growing requirements. For example, shagbark hickory prefers more shaded, upland growing conditions, whereas swamp white oaks can thrive in wetter soils. Other trees planned for installment include shellbark hickories, redbuds, red maples, pin oaks, Kentucky coffee, and pin and red oak varieties. The trees are being planted by Cardno/JF New out of Walkerton, IN.

The trees will also be protected from deer and rabbit browse by installing special tubes around their trunks, and tree mats will be used to prevent the young trees from being overtaken by reed canary grass that is expected to re-grow. The mats also protect the trees from herbicide that will used to control future expected reed canary grass invasions. “Reed canary grass is a persistent invader and seed banks can last even up to 10 years or more,” said Susan MIHalo, Conservation Coordinator for TNC and leader of the project.

Trees play an important part in keeping Coffee Creek healthy for the wildlife that inhabit it, such as a nearly two-foot steelhead trout MiHalo spotted recently that had migrated up from Lake Michigan to spawn. “Trees and other plants play a major role in keeping water in the creek clean as it flows to the Little Calumet River East Branch, and then to Lake Michigan via the Burns Waterway,” said MiHalo. “Tree canopies help disperse water so that it flows less quickly into the stream, and forests act as filtration systems as the water flows through their root systems. Forests also play an important role in absorbing toxins and carbon dioxide from the air, and produce clean oxygen for all life to breathe. They are also home to 80 percent of the earth’s land-based plants and animals,” she said. At the Coffee Creek Preserve, these trees will also eventually help impede the spread of reed canary grass.

This project is the culmination of nearly one year of preparation work involving the CCWC and other watershed preserves: the Indiana Department of Natural Resources’ Moraine Nature Preserve near the top of the watershed and the Shirley Heinze Land Trust’s Keith Walner Preserve at the north end of the watershed. The project is being led by The Nature Conservancy’s (TNC) Southern Lake Michigan Rim Project Office in Merrillville, IN with funding from the Gaylord and Dorothy Donnelley Foundation. The partners have been working together as part of the TNC-funded Indiana Coastal Cooperative Weed Management Area (ICCWMA).

Save the Dunes, Michigan City, IN was also involved in preparation work for this project by developing a predictive model that helped preserve owners consider invasive species that have the potential to invade their lands depending on certain factors such as existing populations, land use and soil conditions. Vectors and pathways that spread invasive plants, such as highways, power lines, birds, and even the creek itself, were also considered.

Taking this information and using it as they assessed their own infestations, preserve owners also developed Site Weed Management Plans that prioritized the invasive species and locations where they should be controlled on their properties, depending on what they are trying to protect. In the case of the Coffee Creek Watershed Preserve, reed canary grass became enemy number one because it aggressively spreads and drives out native plants and tree saplings, eventually turning the area into what is known as a “monoculture.”

The mission of TNC is to conserve the lands and waters on which all life depends.