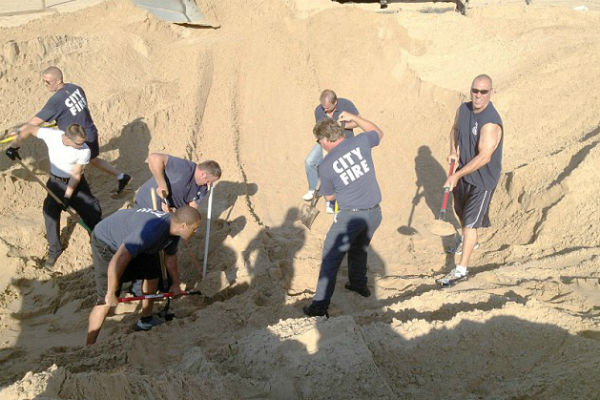 I didn’t catch much of Governor Mike Pence’s “State of the State” address Tuesday night, but I did tune in to Access La Porte County, my local government channel, to see the last couple of minutes.

It turns out I turned it on at the perfect time, as the first words I heard Pence say were “The Miracle on Mount Baldy.”

Pence was of course referring to the July 12, 2013 incident where 6-year-old Illinois boy Nathan Woessner was rescued after being buried under 11 feet of sand for nearly four hours in Michigan City.

“They call it the Miracle on Mount Baldy up there,” Pence told a statewide audience. After hearing of the nationally and internationally-shared story, Pence planned a trip to Michigan City in August to recognize the many heroes involved in the rescue, from police and firefighters to EMS workers and local construction companies donating equipment to pull off what may be the biggest miracle in Indiana history. On Tuesday night, Pence said he told Nathan’s father when he was here, “You know they are calling it a Miracle.” 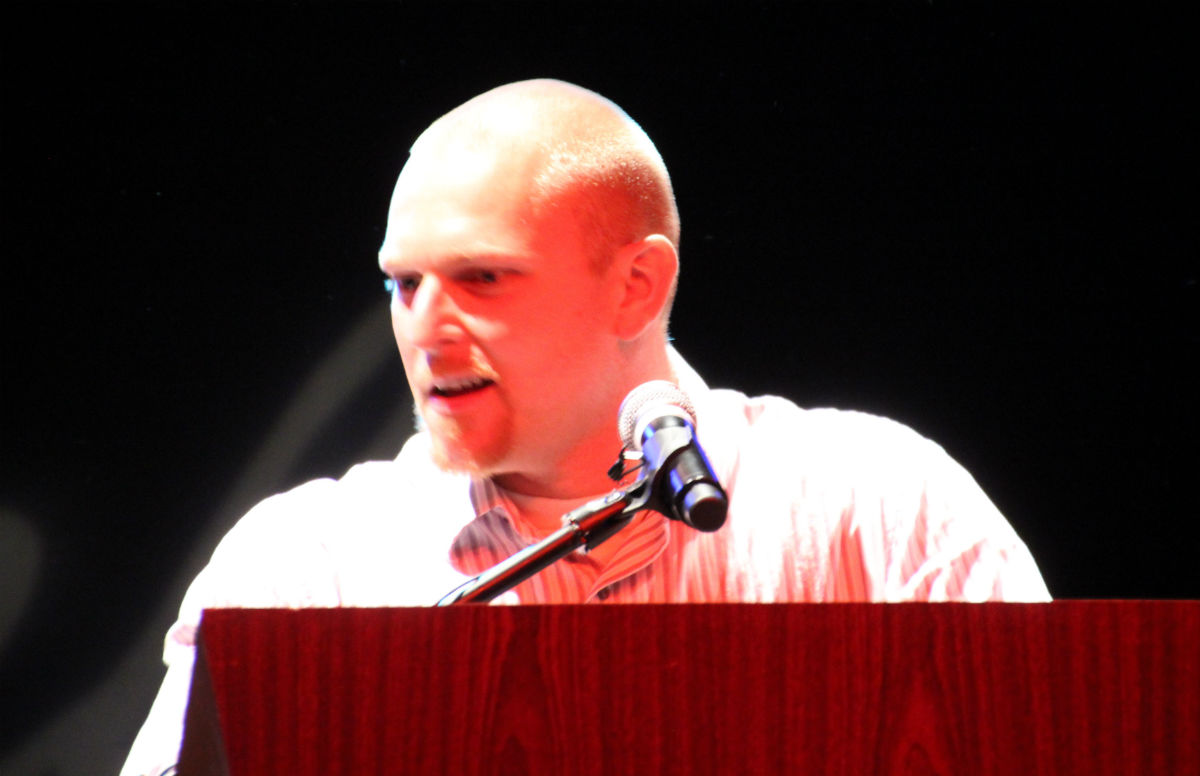 “It wasn’t just our miracle, it was everybody’s miracle,” is what Nathan’s father replied to Pence.

That could not be more true.

I will never forget July 12, 2013 and the emotions that were going through everyone’s mind during the four hours Nathan was buried under sand.

It was approaching 5 p.m. on a Friday and I was working the beginning of my night shift as news editor for The News-Dispatch. Our managing editor, Julie McClure was nearly done with her work for the week, getting ready to go home while speaking to our Publisher away from the newsroom when our sports editor Adam Parkhouse, city reporter Brian Schlender and I heard something odd come across the police scanner.

“It appears there is a boy partially submerged in sand around Mount Baldy,” we heard.

“I don’t know what they mean, let’s keep listening,” I replied.

“Should I go out there,?” Brian asked.

I told him to hold off until we find out more about what’s going on.

“Now it seems like the boy is fully submerged by sand and his family and friends are frantically trying to dig him out,” was the next call on the scanner.

I then told Brian to grab the camera immediately and get to Mount Baldy (which is less than a mile from the N-D office) as soon as he could.

Little did we know at the time that the next four hours would not only change all of our lives, but everyone locally, nationally and internationally who heard this story of heroism.

Brian was the first reporter on the scene, joined shortly after by Julie, who went to Mount Baldy as soon as she heard what was happening. Soon after, after it was determined the boy had fallen below a substantial amount of sand that would need a team of law enforcement officers to try to get to him, the area was closed off to the public and The News-Dispatch was the only media on the scene.

We reported what was happening on our newly-established Facebook page with all of 800 or so fans at the time (we had more than 3,000 by the end of the night).. After our first post, I cannot tell you how many calls I fielded from local, South Bend, Chicago and Indianapolis media outlets wanting to know more about what was going on.

“Is the boy still under sand,?” a reporter from FOX-Chicago asked me. “Is it worth us sending a news van to the scene,?” asked a producer from WNDU-South Bend.

All the while Adam and I were struggling to get in contact with Julie and Brian since cell phone reception at Mount Baldy (and anywhere in that area right on the lake) is always horrible. 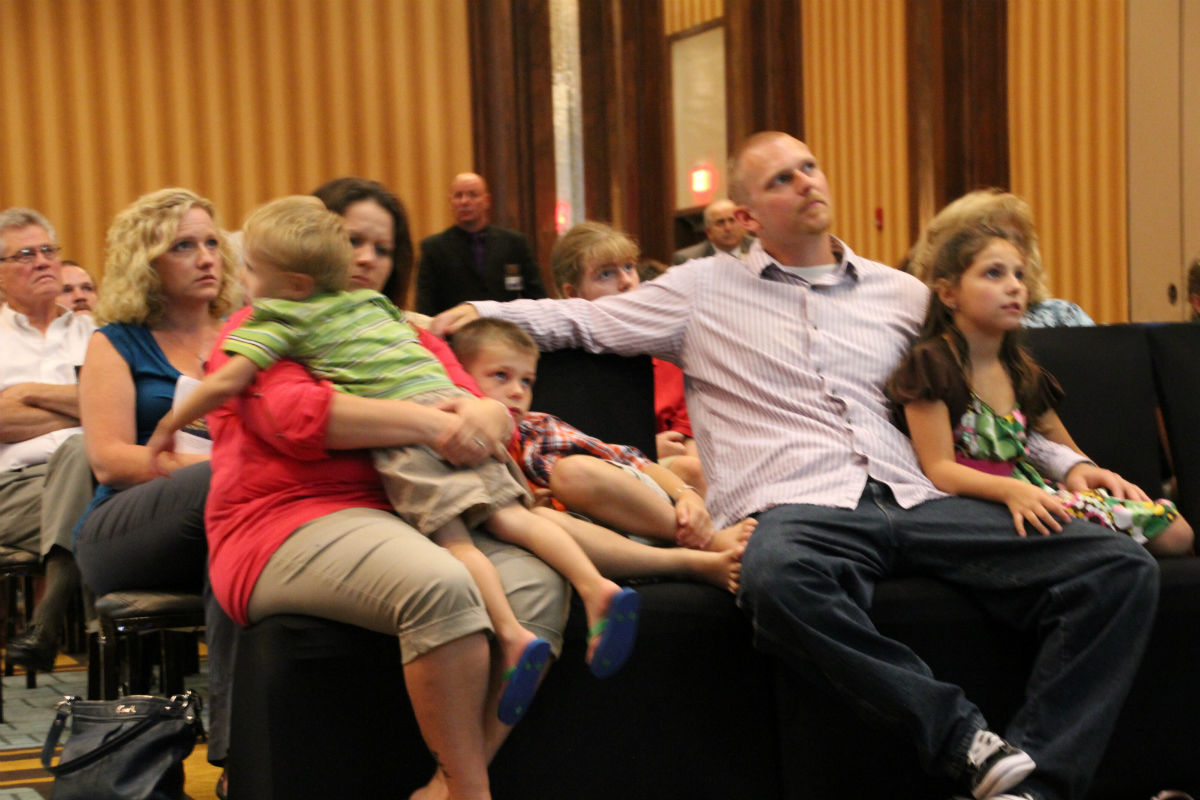 It was one of the toughest nights of work I have ever experienced, but in the end turned into the most rewarding.

While we were putting together the paper, trying to find out more about the Mount Baldy situation and fielding numerous calls from outsiders who had been turned away from the dune, we could not help but pray for this poor little boy and his family. We could not fathom the pain they were enduring right now.

“He needs to be found in 15 minutes,” Adam said. “You just can’t survive under sand for any longer.”

As the time passed, our worries only increased. Every moment that went by was more and more confirmation in our minds that the boy (we did not know his name at the time) was not going to survive.

After about three-and-a-half hours on the scene, Brian came back to the office, unaware that on his way back that a call on the scanner came that the boy was found. It did not say whether or not he was alive, but in our minds we all assumed he had not survived.

Shortly after that, I will never forget driving to the scene to pick up Julie, who had received a ride to Mount Baldy hours earlier by Police Chief Mark Swistek through the NIPSCO property nearby. I picked up Julie from the parking lot, and we were talking about how “this is the worst way to die - being buried under sand.” “Just feel awful for this poor family,” she said.

When we returned to the office, we had to scramble to get a final story together, and I was tasked with calling La Porte County Chief Deputy Coroner Mark Huffman to get the cause of death and other details for our story.

When he returned my call at around 10 p.m., I asked him how it was going.

“What do you mean, Great? That poor boy’s family must be heartbroken,” I replied.

“HE’S ALIVE!” I shouted, as Julie, Adam and Brian all rushed behind my desk to take a look at the notes I was taking while talking to the Deputy Coroner.

I didn’t know it at the time, but Adam was updating our Facebook page with my notes as I was taking them. Our page had more than 3,000 likes by the end of the night.

Huffman informed me that law enforcement, firefighters and EMS had gotten about 10-feet deep in the sand, found a soft spot to get one foot deeper and felt the boy’s head.

He was immediately rushed to Franciscan St. Anthony Health: Michigan City, but on the ride was heard saying “Mom” by one of the firefighters who saved him.

When we finally completed the story of all of our lifetimes, Julie asked me what the ‘Headline’ should be.

“The Miracle on Mount Baldy,” I replied.

How could it be anything else? This was a miracle in every way.

That night, we saw a community that no matter their different faiths, come together through social networking to pray for a little boy who was in grave trouble. We had prayers in all around the world for that boy.

We saw a world-class Michigan City Police Department, Fire Department, La Porte County EMS, neighboring law enforcement agencies and members of the Indiana DNR put their own lives on the line to save him and work tirelessly to find him.

The search was always classified as a rescue. It never went into ‘recovery’ mode. That’s because the brave souls that were digging were not going to give up until they found him. They never assumed he wouldn’t make it, their will would never let them believe that.

Police Officer Greg Radiger later told Julie that he would have been out there overnight and into the next day until they found him.

That’s heroism. And Michigan City showed it that night. I don’t ever recall a time where City residents came together for a certain cause, for a boy we would not know by name until two days later.

I am not a Michigan City native, and had lived in the town for less than three-years at that time. But even I felt the pride that at the end of the night, everyone wanted that boy to survive, and by the grace of God, he did.

“That’s the Indiana way,” Pence said as he closed his “State of of the State” address Tuesday. “God Bless the great state of Indiana.”