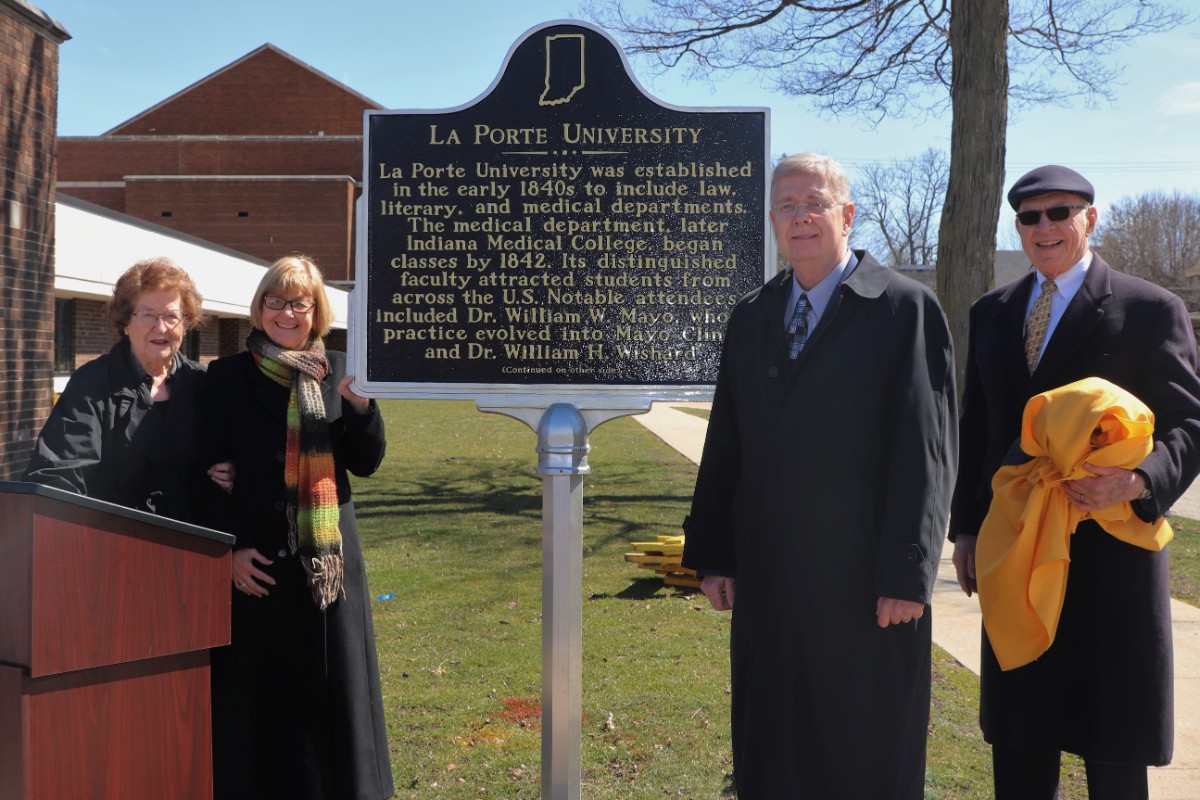 On a cool, sunny day in La Porte, a group of history enthusiasts, committed citizens, and community leaders gathered at the corner of Clay and Harrison for the dedication of a new historic landmark. While there is no longer a structure to identify as the former La Porte University and the Indiana Medical College, the location is now home to an Indiana Historical Marker to commemorate the once prosperous institution.

La Porte University was established in 1838 by a group of settlers led by John Barron Niles. The original school included departments of literature, law, and medicine, the latter being the most influential of them all. The university was run by distinguished professionals in the medical field, including Dr. Daniel Meeker and Dr. Thompkins Higday. Here, at a location that did not have a hospital at the time, the study of medicine was advanced and paved the way for future doctors. Unfortunately, the Indiana Medical School burned down in 1847, destroying all of the school’s equipment and records.

Leigh Morris, former Mayor of La Porte and former President of La Porte Hospital, spearheaded this effort with the help of M. Barbara Backer, MD, a retired cardiologist, Maria Fruth, President and CEO of the Healthcare Foundation of La Porte, and Bruce Johnson, President of the La Porte County Historical Society. As a history buff and active citizen, Morris knew that this was an important addition for the City of La Porte.

“When the university was established, this town was less than 10 years old. For whatever reason, some very well-educated people chose to settle here, and they thought it would be important to have a university,” Morris explained. “They had tremendous impact, and because there was no physical evidence left of the university, it’s been sort of a forgotten asset. I thought it was important for us to renew interest in and understand just how important this university was.”

The process to receive this recognition took many years. Casey E. Pfeiffer, Historical Marker Program Manager at the Indiana Historical Bureau, explained that much of the reason for the delay has to do with the difficulty in accessing appropriate documentation.

“In this case, one of our sticking points is that there has to be primary source documentation to support every point that goes on our marker," explained Pfeiffer. "For many years we didn’t have that. Leigh and our agency were able to do that and now with the digitization of source materials, so much has become accessible that many years ago would not have been found.”

The dedication served as the kickoff for the Indiana Historical Bureau in 2018 and has landed on a fitting date, National Doctor’s Day. La Porte now has ten markers around the city, commemorating everything from civil war camps to the Rumely Company.

Citizens can check out the plaque for themselves at the corner of Clay and Harrison just outside Lincoln Elementary School. Furthermore, a booklet written by Morris titled “La Porte University and the Indiana Medical College: A Pioneering Accomplishment” can be purchased at the La Porte County Historical Society Museum for $5.