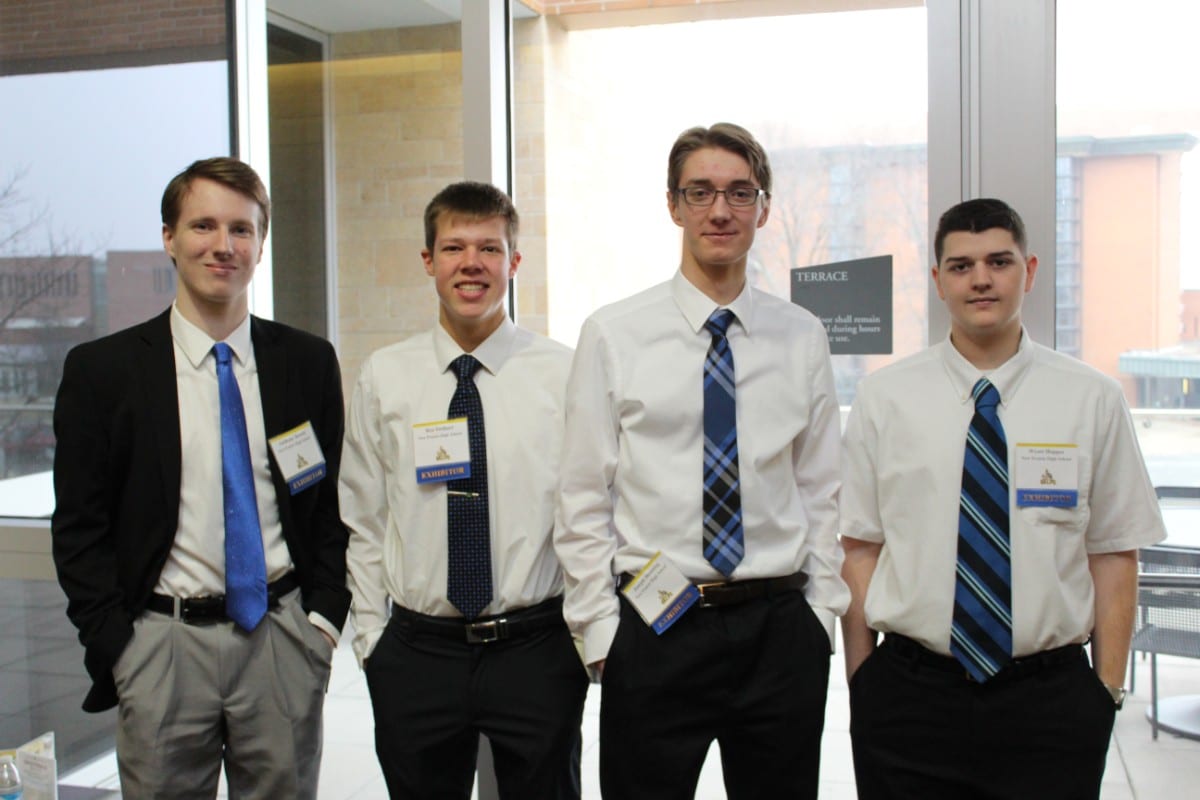 In a crowded ballroom at Valparaiso University’s Harre Union, bright young minds explored some of the strangest, diverse, and important topics of the day. How much fat is in your food? Does social media impact mental health? Why do people respond differently to drugs? All of these topics and more were on the table at Valparaiso University and ArcelorMittal USA’s 2019 Northwestern Indiana Science and Engineering Fair.

The 66th annual fair featured students from schools across every county in the Region competing for cash, scholarships, and other prizes totaling over $5,000. There were a variety of projects with a range of topics from agriculture and environmental science, to psychology and medicine. Dominic Forrester, a 7th grader at Saint John Evangelist School, had one of the more clinical but practical projects: he studied antimicrobial gloves.

“People can get sick in hospitals due to cross-contamination. It’s called a hospital-acquired infection,” he said. Forrester learned about antimicrobial gloves and enlisted his mom and science teacher to help him see how effective they were. “The data showed they are very good against bacteria. The romaine lettuce E. coli outbreak could’ve been prevented by wearing these.”

ArcelorMittal USA, where many engineers, scientists, chemists, and others work, has sponsored the fair for a number of years. Many of these employees utilize their STEM skills serving as volunteer judges for the event. They tour the student’s booths, ask questions, and marvel at the achievements on display.

“Impressive is the right word. These are youngsters just starting their academic careers, and it really is impressive to see these young minds at work trying to formulate a sense of what evidence-based learning is,” said Bill Sammon, a volunteer judge and purchasing manager at ArcelorMittal USA. “It’s a really energizing experience to both judge the competition and be around these young people who are defending, in a scientific sense, what they’re doing and what they’ve learned.”

Some judges, such as ArcelorMittal Chemist Amanda Szentesy, were themselves participants in the fair years ago.

“About 25 years ago I participated in this very fair,” she recalled. “I think it’s really interesting this year. There are quite a few experiments that really tackle current issues, rather than the classic science fair exhibits. They’re taking on social and environmental issues with their very bright minds. It’s so exciting getting to talk to these young scientists.”

Agencies and business such as NASA, the US Air Force, and Intel also offered prizes to stand-out projects. The biggest winners of the day will advance to the state competition later next month. If they win there, they qualify for the international finals in Phoenix, Arizona this May.

“It’s kind of two fold. One of the key things is it’s a chance to get kids engaged with learning math and science on their own and get engaged with the process for themselves,” said Clark. “On the flip side, these kids represent our future and will go on to potentially pursue these subjects as career options. That’s important for 21st century America.”

Winners of the 66th annual Northwestern Indiana Science and Engineering Fair include: