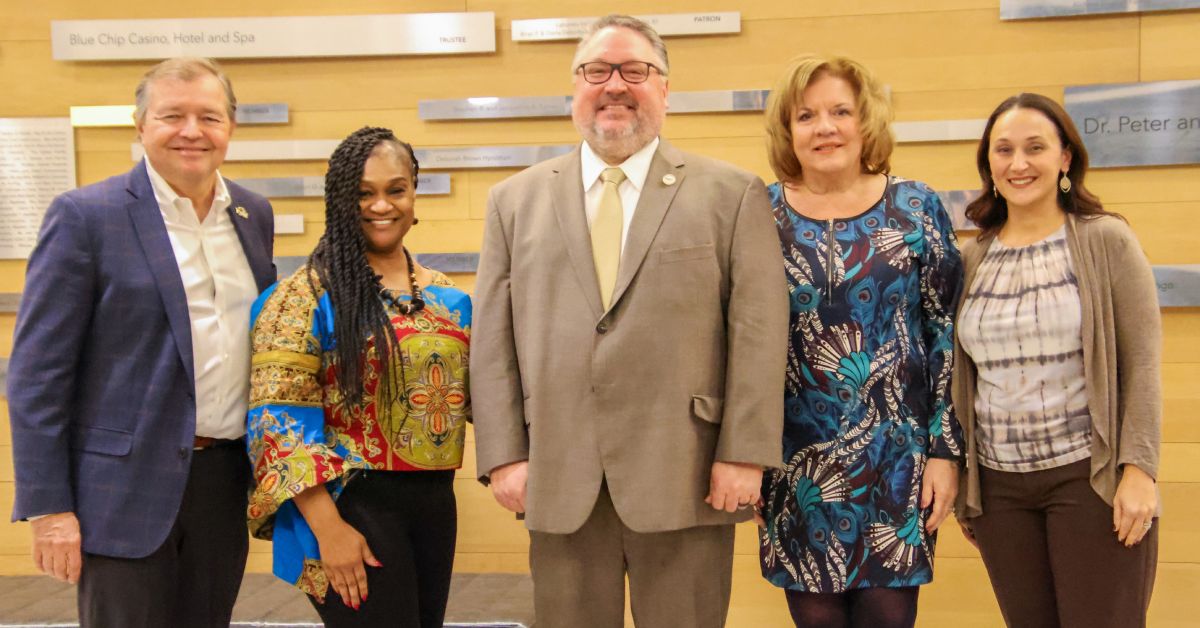 On Jan. 12 Purdue University Northwest (PNW) organizers poured their hearts into a special Martin Luther King Jr. Day celebration that not only recognized MLK, but kept his legacy alive through thoughtful, constructive conversation.

“That was the hope for today – to get people engaged in critical conversations about things that are happening to all of us in one way or another. We’re not just celebrating MLK — we’re really diving deep into who he was and his commitment to social justice,” said LaVada Taylor, professor of Education and co-chair of the Cultural Heritage Celebration Committee.

The event kicked off with community conversations. Attendees broke off into small groups and discussed important topics including racial inequality and voter suppression in Northwest Indiana.

Angie Nelson Deuitch, president of Diversity Squared, led one of the group conversations and posed many important and difficult questions. Deuitch explained how opportunities to have conversations like this are incredibly vital in the mission for equality.

“Having conversations like this is important because it allows you to stand in someone else’s shoes and understand more about some of the roadblocks that they may have experienced. A black person and a white person can walk into the same store and have a completely different experience, but if you don’t have a conversation about the experience or the outcome of what happened, you’ll never know,” said Deuitch.

The community members in attendance were incredibly eager to engage with one another and learn from each other. They bounced questions and ideas off of each other – even questions that no one quite had the answers to. Many left the conversation feeling passionate and driven to implement change.

“I think the outcome from the whole conversation is that we need to have more conversations. We need more people to be engaged and not be afraid to have a conversation,” said Deuitch.

The community conversations were followed by keynote speaker Carol Anderson, professor of African American Studies at Emory University and author of “One Person, No Vote: How Voter Suppression is Destroying Our Democracy” with a talk about voter suppression.

“I think it’s timely with the election period coming in full fruition and with the presidential election coming up in a year. It’s just a really vivid way of understanding what voter suppression looks like today versus in the past. It makes me realize that there isn’t much difference – the names are different, but the tactics are still the same,” said Taylor.

Anderson spoke passionately about obstacles that have kept black people from voting in the past such as literacy tests and poll taxes. She then talked about where we are today and how there are still similar practices in place, such as Voter ID laws, that are keeping black people from the polls.

Some of the things Anderson spoke about were upsetting and difficult to hear, but she encouraged everyone to remain optimistic.

“I know it looks bleak,” said Anderson, “but one of the things that you’re seeing is what we saw in the movement. People’s quest for democracy cannot be denied. They won’t be denied. They will find ways to get around, over, and under the obstacles in order to put in place representatives who are truly representative of American democracy and who truly value the folks who live here. That is what we’re seeing.”

NIPSCO was the lead sponsor of the event. After Anderson finished her speech, Manager of Public Affairs and Economic Development at NIPSCO Denise Conlon expressed how she was left feeling inspired and hopeful about the future.

“I feel like I took away a renewed hope for the future. We might be in a bit of a stagnant spot now, but there’s definitely hope to be had. Her message was clear: keep going,” said Conlon.

PNW’s celebration and conversation doesn’t end here. PNW is helping sponsor the Black K.A.R.E. (Kidney Awareness Resources and Education) program with the Northern Indiana Chapter of the Links to provide weekend backpack meals for children facing food insecurity at Frankie McCullough Academy in Gary. A backpack’s worth of food will be provided to each child every weekend from now until the end of the school term.

To learn more about PNW and its commitment to diversity, equity and inclusion, visit pnw.edu.