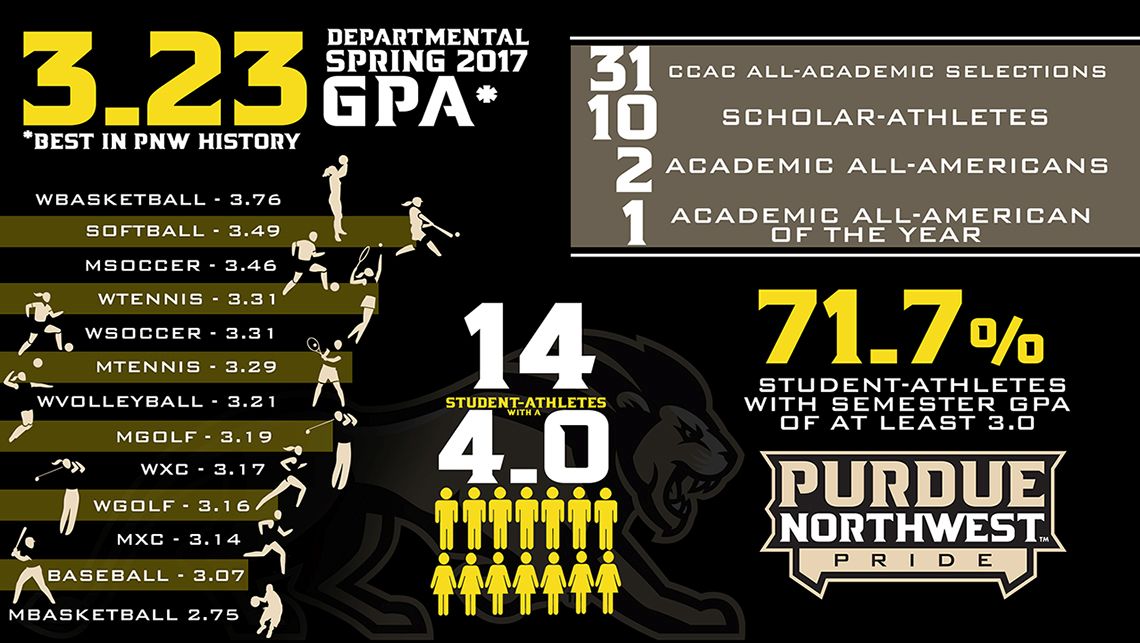 The group of nearly 200 PNW student-athletes combined to average a semester GPA of 3.23, with a whopping 71.7 percent of all Pride student-athletes carrying a 3.0 GPA or higher. Fourteen earned a perfect 4.0 and the NAIA National Tournament qualifier women’s basketball team led the way with a stellar 3.76 team GPA.

“The continual rise of our student-athlete success in the classroom is exciting to see as we move into NCAA Division II and the Great Lakes Intercollegiate Athletic Conference this fall,” Director of Athletics Rick Costello said.

“I’m proud of our student-athletes, our coaches, and staff, and all who support their success — what a year in the classroom for the PNW Pride!”

After three years of leadership of the Purdue University Northwest sports information department, Watkins leaves PNW to take on a new role as the Director of Athletics Communications at NCAA Division III University of Chicago, located in the Hyde Park neighborhood.

“We are saddened to see Nicole go but wish her the very best in her new opportunity at the University of Chicago,” PNW Director of Athletics Rick Costello said.

“Her tireless work to promote the student-athletes of Purdue Northwest has been nothing short of noteworthy and we are extremely appreciative of her efforts to build a fantastic athletic brand for the Pride.”

During her tenure at PNW, Watkins was named the 2015-16 Chicagoland Collegiate Athletic Conference Sports Information Director of the Year and recently led the department in earning the NAIA’s top publications honor, the 2017 Gary Spitler Memorial Award for Excellence in Publications.

Since arriving in July 2014, the PNW social media presence has exploded, as Watkins helped implement a social media strategy that led to a major growth in followers of the Pride’s main accounts: Instagram (+384%); Twitter (+226%); Facebook (+215%); in addition to YouTube video views (+535%).

In addition, Watkins led the charge to upgrade the athletic department’s basketball and volleyball video streaming product — The Pride Sports Network — to a student-run, multi-camera, high-definition production, which led to an increase of live views by 135% in two years.

Her leadership also included the redesign and development of PNWathletics.com after the July 2016 unification of Purdue Calumet and Purdue North Central, in addition to being a major player in the development of the Pride mascot name and creation.

“The decision to leave PNW was not an easy one, and that’s 100 percent to do with how great the people are here at Purdue Northwest,” Watkins said. “I want to thank Athletic Director Rick Costello for giving me this opportunity three years ago, as well as all the coaches, staff, student workers, and of course, student-athletes, I’ve had the privilege to work with.”

“While it is bittersweet to leave Purdue Northwest, I’m excited for my new opportunity at the University of Chicago and can’t wait to get started in the next chapter of my career.”

Watkins’ last day at PNW is July 14. A nationwide search for her replacement will begin immediately.

To qualify for CCAC All-Academic honors, student-athletes must have maintained a minimum cumulative grade point average of 3.25 or higher and earned at least 30 semester hours of credit in addition to being enrolled at their institution for at least one academic year.

Below is the PNW list of CCAC All-Academic honorees for Winter/Spring 2017.