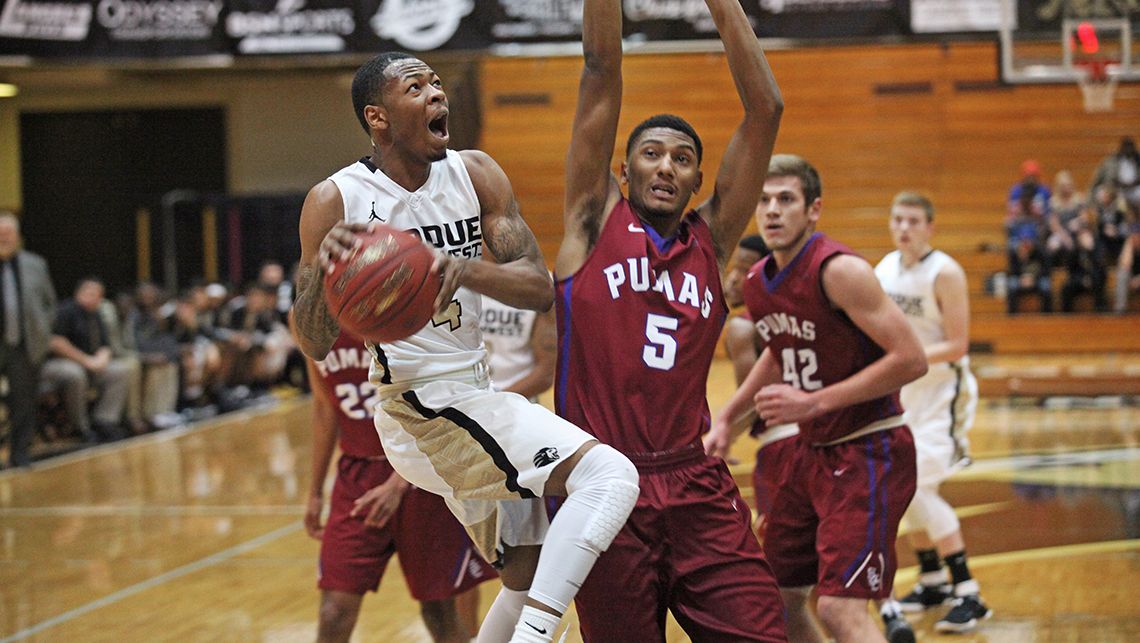 Tyree Coe (Fishers, Ind./Fishers) scored 14 points while Franklin Nunn (Anderson, Ind./Liberty Christian) chipped in with 11 points to round out the leaders for the Black and Gold.

The Pumas would extend their lead toward the end of the period to take a 53-33 advantage heading in to the break.

The Black and Gold trailed St. Joseph’s for the remainder of the second half, but continued to fight hard, cutting their deficit to 14 points, 96-82 with just over three minutes left in the game.

St. Joseph’s would keep its double-digit lead for the remainder of the game, leading the Pumas to a 104-89 victory.

Nick Jeffirs led the Pumas offensively with 18 points while Nic Williams finished the night with 17 points and seven rebounds.

The Black and Gold return to action Saturday, Dec. 10, when they travel to Chicago, Ill. for a CCAC contest with Robert Morris. Tip-off is set for 3 p.m. (CT).

Reyes (Tabio, Colombia) and Cunha (Sao Paulo Brazil) were two of the 423 men’s soccer student-athletes in the NAIA to earn the award, which requires students maintain a minimum grade point average of 3.5 on a 4.0 scale along with junior academic status to qualify for the honor.

A team captain, Reyes started in 18 matches for the Black and Gold, recording a pair of goals and playing 1386 minutes in senior season. He carries a 3.91 grade point average in mechanical engineering.

Cunha also played an integral role for the Black and Gold this season, playing in 15 matches for the Pride this season. Named an CoSIDA Academic All-District selection, Cunha carries a perfect 4.0 grade point average in mechanical engineering.

The Pride (4-6, 3-3 CCAC) have won three out of their last four CCAC contests, after taking down the Saints (6-7, 2-3 CCAC) at the Student Services and Activities Complex.

The Black and Gold were led by Torrance Johnson (Chicago Heights, Ill./Chicago Hope Academy) who racked up his fourth straight double-double with 18 points and 16 rebounds.

After the Saints took a 22-13 lead to start off the contest, PNW would battle back to put the game within three points, 31-28 heading in to the break.

Holy Cross held a 10-point advantage, 56-46, with just under eight minutes remaining in the game, but the Black and Gold battled back after three-straight trifectas from Coe and Clifford put the Pride within one, 58-57.

Freshman guard Brandon Cory (Lowell, Ind./Lowell) would give the Black and Gold a 61-60 lead with 3:13 left, followed by another trifecta from Clifford which put the Pride up by four.

PNW would finish the game strong and hold on to complete their comeback efforts and defeat the Saints, 70-65.

The Black and Gold return to action on Thursday, Dec. 8, when they host NCAA Div. 2 opponent St. Joseph’s College at 7 p.m. (CT) at the Fitness and Recreation Center.

Purdue Northwest improved to 10-3 overall and remained perfect in Chicagoland Collegiate Athletic Conference play with a 6-0 mark, while Holy Cross fell to 4-8 overall and 3-2 in the CCAC.

Senior Katie Wampler (Scottsburg, Ind./Scottsburg) added 14 points on 4-of-7 from the field and 6-of-7 from the free-throw line, junior post Ellie Michalski (Mukwonago, Wis./Mukwonago) added 12 points and seven boards and freshman Shae Rhonehouse (Fremont, Ind./Fremont) had 11 points to round out the Pride leaders.

PNW led 17-13 at the end of the first quarter and then outscored the Saints by a 21-13 margin in the second to take a 38-26 lead at halftime. Wampler and Thompson led the way in the first half, each scoring nine points and Deno added seven.

The Pride would go up by as many 20, 57-37, after a three-point play the old-fashioned way by junior forward Jessica Kiser (Noblesville, Ind./Noblesville) at the 4:35 mark in the third quarter. The Saints would make a charge, cutting that lead to nine, 66-57, early in the fourth quarter, but back-to-back 3s by Deno and Thompson sent PNW back to a 13-point lead with 7:57 left.

The Saints won the rebounding battle, 40-30, but the Pride capitalized on 14 HCC turnovers, scoring 22 points while committing just nine giveaways.

Tagin Schultheis led the Saints with 21 points and Keysha Streater had 19 in the loss.

Purdue Northwest returns to action Saturday, Dec. 10, when the Pride travel to Robert Morris Illinois for a CCAC contest in Arlington Heights, Ill.

Tiffani Kotas (Alsip, Ill.) led the Black and Gold in minutes played this season (1204) while playing and starting in all 16 matches en route to a 5-11 record. Kotas majors in mechanical engineering and carries a 3.90 grade point average.

Christina Kotas (Alsip, Ill.) also played a large role for the Pride during the year, participating in 16 matches, 15 of them being starts, while playing in 1032 minutes. Majoring in mechanical engineering, Christina carries a 3.96 grade point average.

In order to be nominated by an institution’s head coach or sports information director, a student-athlete must maintain a minimum grade point average of 3.5 on a 4.0 scale and must have achieved a junior academic status.

The Pride (3-6, 2-3 CCAC) were led by junior Torrance Johnson (Chicago Heights, Ill./Chicago Hope Academy) who brought down a career-high 20 rebounds while scoring 19 points on 8-of-12 shooting.

Trinity International would extend their lead and eventually take a 48-39 lead heading into the half.

Purdue Northwest would fight back to get within three points midway through the final half, after a layup by Nunn made it 61-58 in favor of TIU.

The Trojans would stop the Pride from taking back the lead, extending their advantage late in the game and taking the 87-73 win over the Black and Gold.

TIU was led by Zach Kirschbaum who scored 18 points while bringing down 16 rebounds with five assists to headline the offense for the Trojans.

PNW will return to action Tuesday night, when they host Holy Cross College in a CCAC contest at the Student Services and Activities Complex in Westville, Ind. Tip-off is set for 7 p.m. (CT).

Arielle Miree and Basha Ramsey led TIU, who has lost six straight, with 10 points each.

Purdue Northwest returns to action Tuesday, Dec. 6, when the Pride host CCAC foe Holy Cross College at the James B. Dworkin Center in Westville, Ind. Game time is set for 5 p.m. CT in the first game of a doubleheader with the men’s teams.

Martin (DeMotte, Ind./Kankakee Valley) was a first-team all-Chicagoland Collegiate Athletic Conference selection in 2016 after she finished the 2016 season as the league’s top hitter, leading the CCAC in kills per set at 4.03 in conference play.

Purdue Northwest, a new program in 2016 after the merger of the Purdue Calumet and Purdue North Central programs, finished the year with 18 wins under head coach Julie Wiejak, the most by either team since the 2010 season when PNC finished with 22 victories.

PNW earned a berth in the CCAC Tournament, the first for either program since the 1990s, eventually falling to No. 2 seed and CCAC Tournament champion St. Francis (Ill.) in five sets Nov. 8.

For a full list of the AVCA NAIA All-Region teams: https://www.avca.org/awards/all-regional-all-america-awards/2016-naia-region.html