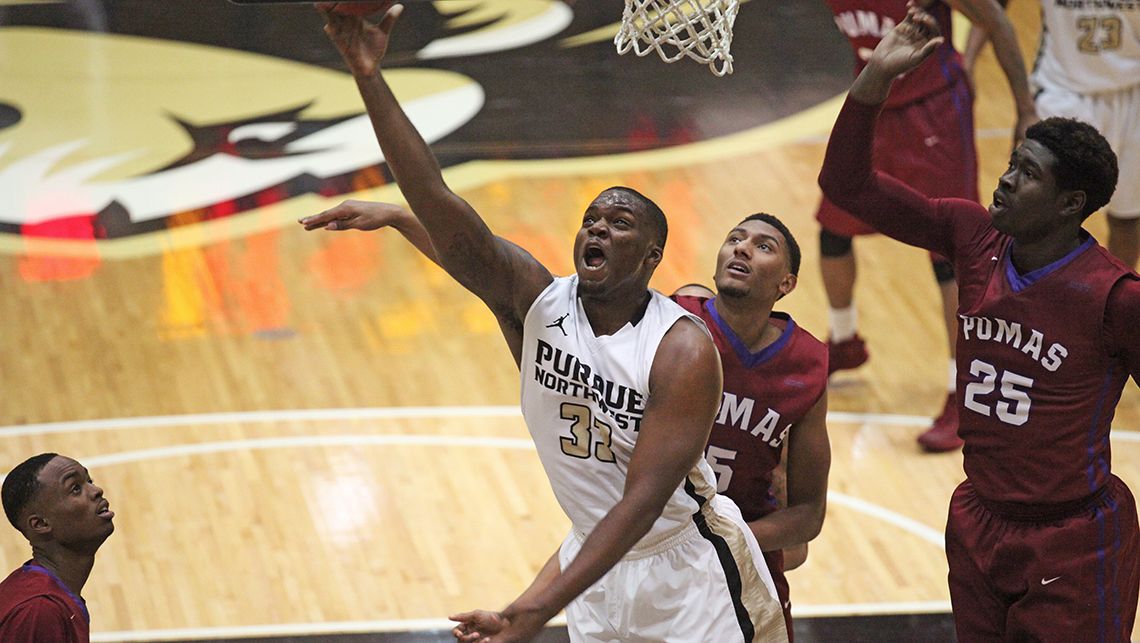 Junior Torrance Johnson (Chicago Heights, Ill./Chicago Hope Academy) picked up his sixth double-double of the season with 23 points on 9-of15 shooting while bringing down 11 rebounds.

Freshman Franklin Nunn (Anderson, Ind./Liberty Christian) started things off for the Black and Gold, scoring the first five points of the game to put the Pride up 5-0.

After a layup by Illya Galloway cut the Eagles deficit to three, 14-11, the Pride would go on a 7-0 run to extend their advantage midway through the first half.

PNW would hold on to that lead for the rest of the period, taking a 39-31 lead in to the break.

The Black and Gold would have its largest lead of the day at the 16:55 mark thanks to a layup by Johnson.

The Pride would answer any comeback attempts by the Eagles, shooting 50 percent from beyond the arc in the second half and hold on to the 80-71 victory.

The Pride return to action Tuesday night, when they face off with Keiser University in the opening game of the KU Tournament in West Palm Beach, Fla. Tip-off is set for 6 p.m. (CT).

But PNW, who struggled from the field in the first half (38.7 percent), would stay in the game by getting to the free-throw line, making 13-of-16 in the first half — led by Wampler’s 6-for-6 performance. Thompson added nine points in that quarter, including fast-break layup with six seconds left to cut the deficit to just three, 41-38, heading into the locker room.

Aided by the momentum of the second quarter, PNW opened the third frame on a tear, outscoring the Eagles 25-6 to take a commanding 16-point lead heading into the fourth quarter. Deno found her stroke in the third, draining back-to-back 3s to score 13 points and Thompson added eight points of her own.

PNW never let it get closer than 14 points in the fourth, leading by as many as 20 points with 3:38 to play.

Purdue Northwest returns to action after the Christmas holiday, when the Pride travel to Miami Gardens, Fla., for the St. Thomas Tournament Dec. 27-28. PNW will take on host St. Thomas on the 27th, followed by a matchup with NAIA Division I No. 6 team, Campbellsville (Ky.), on Dec. 28th.