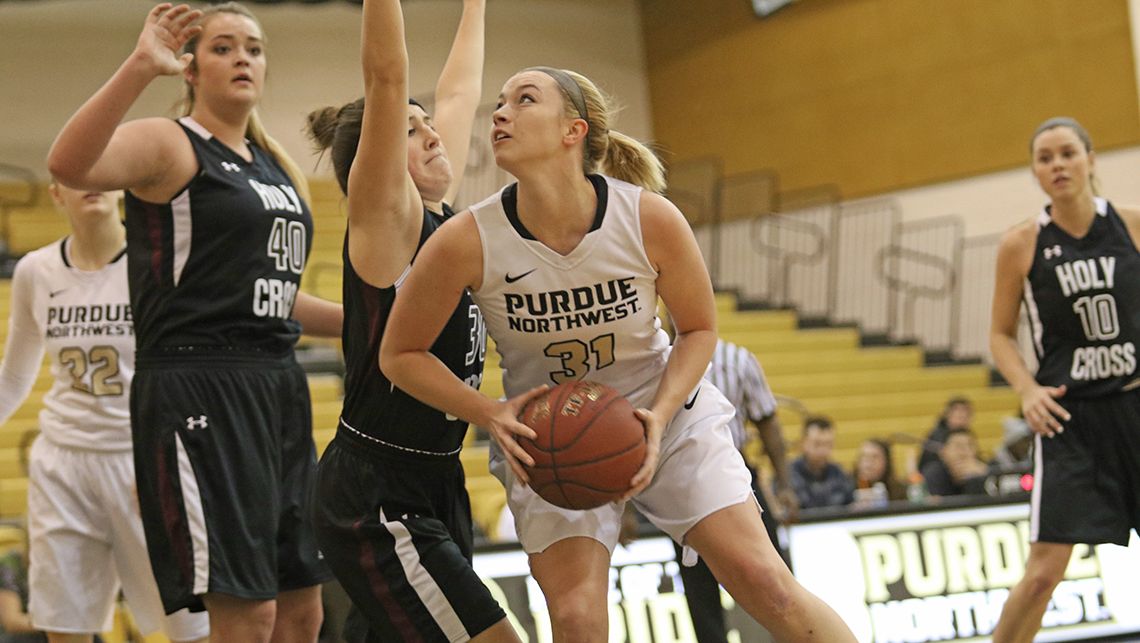 After a three-point field goal by Spring but the Pride up 14-10 midway through the opening half, the Eagles would even the score at 24 points apiece with 7:10 remaining.

The Pride would retake the lead toward the end up the period, but a trifecta from Darius Paul with just would knot the game at 40-40 sending in in to the break.

With just over five minutes remaining in the game, a layup from Johnson put the black and Gold ahead 70-68.

Both teams would trade baskets until the 1:17 mark, when a three pointer from Darius Randolph put RMU ahead 83-79.

The Pride would keep fighting for the remainder of the game, answering the made baskets from the Eagles, but clutch free throw shooting down the stretch helped seal the game for RMU.

Purdue Northwest shot 49.2 percent from the field compared to 48.4 percent from RMU, while the Eagles won the battle on the boards 36-32.

The Black and Gold return to action Saturday, Dec. 17, when they host Judson University in a CCAC contest at the Student Services and Recreation Center in Westville, Ind. Tip-off is set for 3 p.m. (CT).

The Pride overcame a tough shooting performance (32.7 percent) from the field by making 28-of-36 (77.8 percent) of their shots from the charity stripe, led by Thompson’s near-perfect 15-of-16 makes at the line.

The Pride would lead by as many as 13, 51-38, with 5:45 left in the game after a Deno three-point play. The closest Robert Morris would get after that was seven, 59-52, with 55 seconds left, but Thompson would seal the victory with a jumper late.

RMU outrebounded the Pride, 43-35, but PNW scored 16 points off 16 Eagle turnovers while committing just 10 giveaways of its own.

Robert Morris finished the game shooting just 27.7 percent (18-of-65) from the field and reached the free-throw line 14 times, making 11.

Victoria Harris led the Eagles with 15 points and Jannah Mahmoud added 12 points in the loss.

Purdue Northwest returns to action Saturday, Dec. 17, when the Pride host Judson University in a CCAC contest in Westville. Game time at the James B. Dworkin Center is set for 1 p.m. CT.

Warner, a native of Dyer, Ind., comes to PNW after serving as an assistant coach for the NCAA Division II Nova Southeastern University (Fla.) cross country and track and field programs for the last four seasons.

“We are excited to have Austin lead our cross country programs as we transition into NCAA Division II and Great Lakes Intercollegiate Athletic Conference competition next fall,” Costello said. “Austin’s experience in Division II, his enthusiasm for the sport and his ties to Northwest Indiana were all reasons why we believe Austin will be an outstanding coach at PNW.”

“I am thrilled and thankful to Rick Costello and the entire search committee for the opportunity to return to the Region and lead the men’s and women’s cross country programs at Purdue Northwest,” Warner said. “I am eager to prepare and build the programs for NCAA Division II competition and develop the student-athletes both on the cross country course and in the classroom.”

Prior to NSU, Warner served as an assistant for the men’s and women’s cross country programs at Division II Hawaii Pacific in 2012, where in addition to his team duties, he served as the meet manager for the PacWest Conference Championships and the NCAA Division II Regional meet.

He earned a bachelor’s degree in sport and exercise studies at Trinity Christian and recently attained a master’s of education in athletic administration from Nova Southeastern.

In order to be nominated by an institution’s head coach or sports information director, a student-athlete must maintain a minimum grade point average of 3.5 on a 4.0 scale and must have achieved a junior academic status.