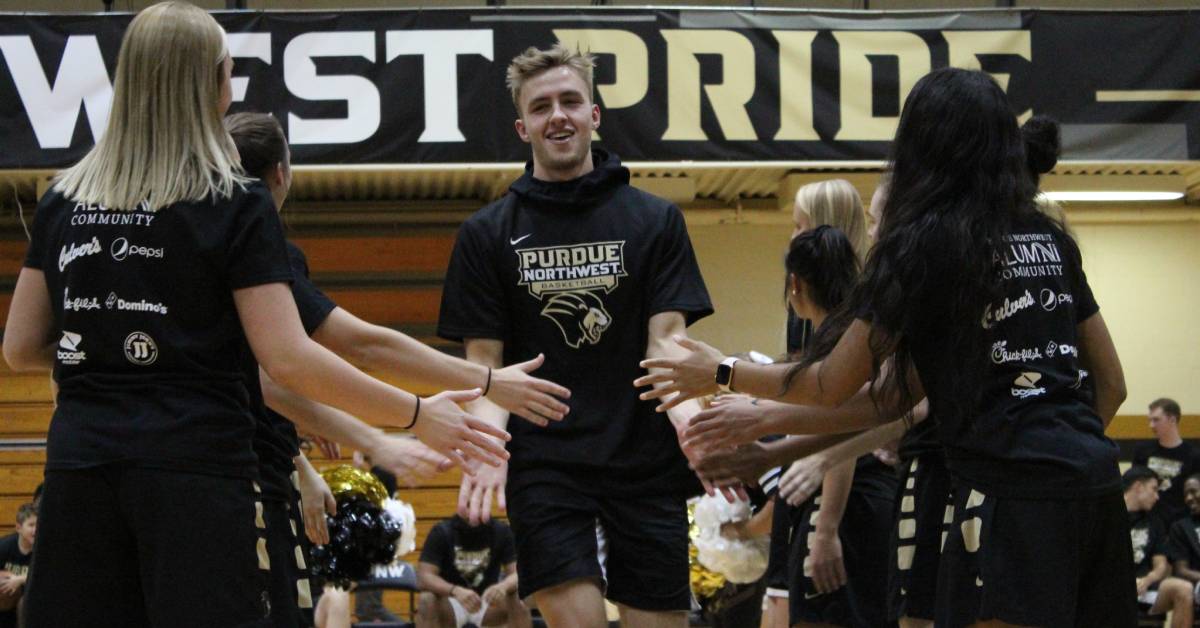 Hundreds of students flooded Purdue University Northwest Hammond Campus’s Fitness and Recreation Center for the university’s 7th Annual Late Night Madness. The event, free to all PNW students, faculty, and staff, celebrated the beginning of the men’s and women’s basketball seasons. Featuring food from Chick-fil-A, Dominos, Culver’s, Jimmy John’s, and Chartwells, and even prizes like a PS4, Airpods, and a TV – the night was full of fun and games.

The crowd arrived early, with a massive line snaking its way through the halls of the Fitness and Recreation Center before wrapping around the building’s exterior. PNW strives to cultivate an excellent sporting culture, and Director of Athletics Rick Costello was thrilled to see so many students come out to support their athletes.

“We have hard-working, high achieving students on our teams that are focused in the classroom and give back to the community in record numbers,” Costello said. “We’re just really proud of what our students are doing, and for us, it’s about telling their story. It’s awesome to see the support, and it’s like this every year.”

The student-athletes competed in a three-point shootout and dunk contest, with a bike and television as prizes for lucky students in the crowd.

For the seniors of the women’s basketball squad, Late Night Madness is always one of the year’s biggest highlights.

“Every year it gets bigger and bigger; It’s so fun,” said Bayley Goodman, PNW women’s basketball team senior. “It’s a great atmosphere and a great way to kick off our season.”

Students in the stands cheered as the two teams battled each other on the court. Shae Rhonehouse, another senior on the women’s team, said that the sports culture at PNW has been one of the biggest and best aspects of her experience at the school so far.

“PNW stands for family,” Rhonehouse said. “You come in here every day, and you’re with a group of girls who all love each other and come to practice for each other. It’s just been a great four years to have family on and off the court.”

In between the athletic challenges, fans competed in contests such as musical chairs, ultimate tug-of-war, and a massive dance contest judged by the pep teams. Leo the Lion wandered across the court and through the crowd, rallying the fans to “Roar Pride.”

“We’re the only NCAA Division II school in the Northwest Indiana area,” said Patrick Massoels, Assistant Athletic Director for Sports Information and Marketing at Purdue University Northwest. “We think this is the kind of program people want to see. It’s athletics they can be a part of, where they can see their children, siblings, and friends. We’re proud to offer that to this area.”