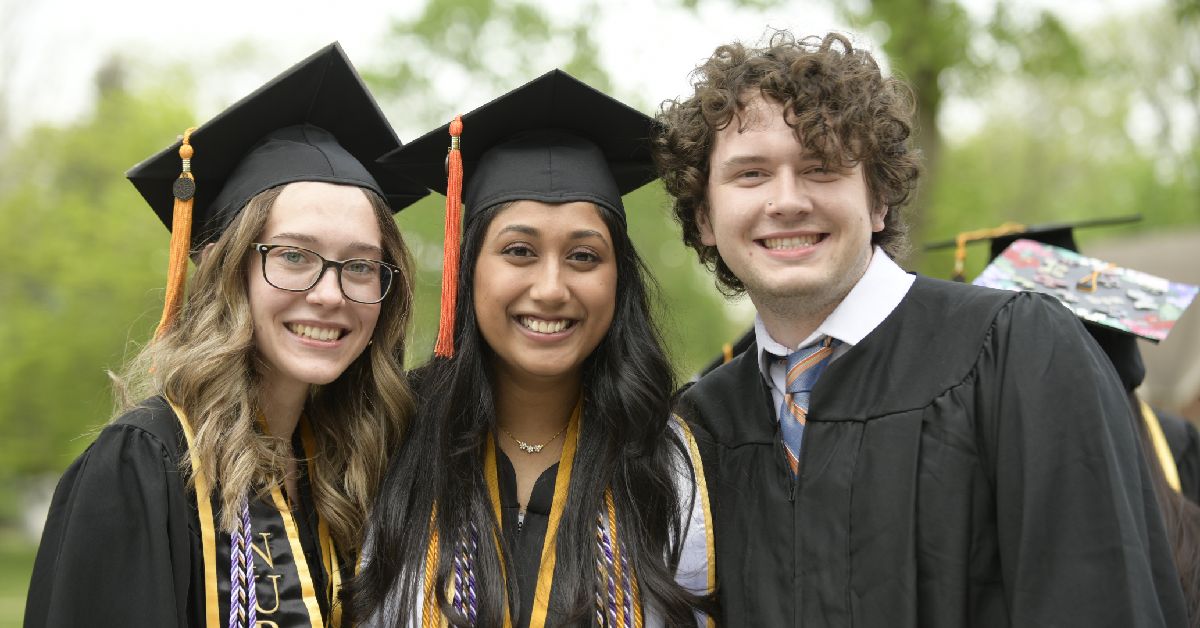 Purdue University Northwest (PNW) celebrated its spring 2022 commencement on May 15 at the Hammond campus. The graduating class consisted of 976 candidates which included 856 who earned baccalaureate degrees and 120 who earned Master's degrees. The 976 candidates represented PNW's five academic colleges: Business, Engineering and Sciences; Humanities, Education and Social Sciences; Nursing; and Technology.

The keynote speaker was Alfredo “Al” Sori, a 1989 graduate. Sori, who most recently served as division manager of Kiewit, Inc. subsidiary Mass Electric Transportation before retiring, told graduates there were key character traits of those with highly successful careers and lives.

“The top three character traits are integrity, respectfulness and courageousness,” said Sori. “Integrity takes years to build, and only seconds to lose.” He went on to explain the value of each one and how it impacts success.

Then it was time for the Chancellor’s Medallion recipients to be celebrated. Graduates who earned the highest grade point average in their respective academic colleges were honored with the medallion.

Family members presented the recipients with their medallions. Twelve-year-old Elayna Kyriakakis was nervous, yet proud, to place the medallion around the neck of her mom, Nikoletta. “My mom is fantastic. I’m glad that she is pursuing her dreams,” said Elayna Kyriakakis.

Nikoletta had left cosmetology after ten years. She will follow her dream by becoming a Neonatal Intensive Care Unit Nurse at Advocate Christ Medical Center.

“I always wanted to go back to school. The part I loved the most about cosmetology was the people and the connections you made with them,” said Nikoletta Kyriakakis.

“Nursing does the exact same thing except you are dealing with people in more vulnerable states and I thought that I could add some value to the field.”

The class of 2022 was the first graduating class to participate in the inaugural singing of PNW’s new “Alma Mater.” After an a capella rendition, the PNW Bell Tower played the song, and then all present participated in singing. Matt Wells, Associate Vice Chancellor for External Engagement and Development, wrote the lyrics and the music for the song.

Jordyn Soffa, a nursing graduate, will be working in the intensive care unit of Northwest Health La Porte Hospital. She was excited to be graduating but will cherish the bonds of support she made.

“At PNW you really get close with your cohort. When you go through something like nursing school, it is important to have that support,” said Soffa. “I have been able to gain a lot of friends that have been going through what I was going through and really get to know my professors. That will always be my favorite part.”

The support is what Freddy Ulloa will miss. Ulloa graduated from the College of Business with a master’s degree. The moment was bittersweet as he has attended PNW for his entire college career. He plans to continue on for his Ph.D.

“The environment and the culture here are great. The professors are helpful and supportive of their students,” said Ulloa. “That kept me away from looking at other colleges and staying here.”

“Remember not only the lessons but the professors who have changed your life,” said White.

“Remember the lifelong friends and connections you have made that have become an integral part of your life. Remember the mentors and co-workers who cheered you on to success.”