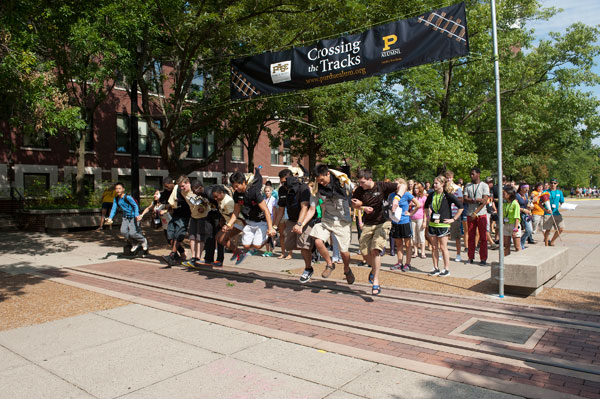 Purdue University continues a multiyear trend of its first-year students setting foot on campus with higher test scores and better grades than ever before, which helps position them to be successful college students.

"Our retention and graduation rates also are increasing, which shows that these students arrive on campus better prepared and ready to work hard," said Purdue acting President Timothy Sands. "College isn't easy, and Purdue has high expectations for students, so we support their strong academic foundation with campus resources, facilities and technologies to help them excel at Purdue."

A number of Indiana's best students also are enrolling at Purdue. There are 621 top students graduating from Indiana high schools, according to the College Board. This year, Purdue enrolled 281 Indiana students that match the board's criteria, which is based on SAT scores and grade point averages.

"We are a higher education destination," Sands said. "Purdue has been noted as one of the top 'best value' colleges and as one of the top universities for job recruiters, and people recognize the value of a Purdue degree in the state, nation and around the world."

Interest in the university also was captured with the institution's all-time high number of applicants for both levels - graduate at 17,507, and undergraduate at 30,903.

This year's freshman class size, which is 368 fewer than last year, also represents the university's move toward target student populations of 30,000 undergraduates and 9,000 graduate students.

"Admissions is strategically moving toward this target enrollment goal by 2014 to continue serving students with high-quality instruction, while matching the size of the student body with our physical and educational resources," said Pamela T. Horne, associate vice provost for enrollment management and dean of admissions.

During the last several years, Purdue has focused on improving its retention and graduation rates, and for the first time in several years, both the four-year and six-year graduation rates increased. Last year the four-year and six-year rates were 42.4 percent and 68.7 percent, and this year they increased to 45.7 percent and 70.2 percent, respectively. This follows another increase in retention rates with the first-year retention rate at 90.6 percent compared to last year's 90.2 percent, and the second-year retention rate, 83.7 percent compared to last year's 82.5 percent.

"Retaining students and improving graduation rates is a higher education issue for all universities, and Purdue is seeing record rates because of our focus on programming in academics and student life," said Victor Lechtenberg, acting provost. "The Student Access, Transition and Success area has played a key role with programs such as Boiler Gold Rush and Learning Communities, and we continue to develop more strategic and research-based approaches that establish a framework for student success."

The total system enrollment - which includes West Lafayette, Purdue Calumet, Indiana University-Purdue University Fort Wayne, select programs at Indiana University-Purdue University Indianapolis, Purdue North Central and the Statewide Technology Program - is 75,703. All but 502 Indiana students who applied to the West Lafayette campus were offered admission to the Purdue system. Indiana residents make up 68.8 percent of students in the Purdue system.

The number of international students on the West Lafayette campus is 8,562, which is 628 students more than last year.

"This large and diverse international student population is a valuable component of the educational experience because students have a global experience every day in classrooms, student groups and campus life," said Michael Brzezinski, dean of international programs.

"The interest in advanced degrees is part of a national trend, and we're glad to see the ongoing interest in Purdue's graduate studies," said Mark J. T. Smith, dean of the Graduate School.