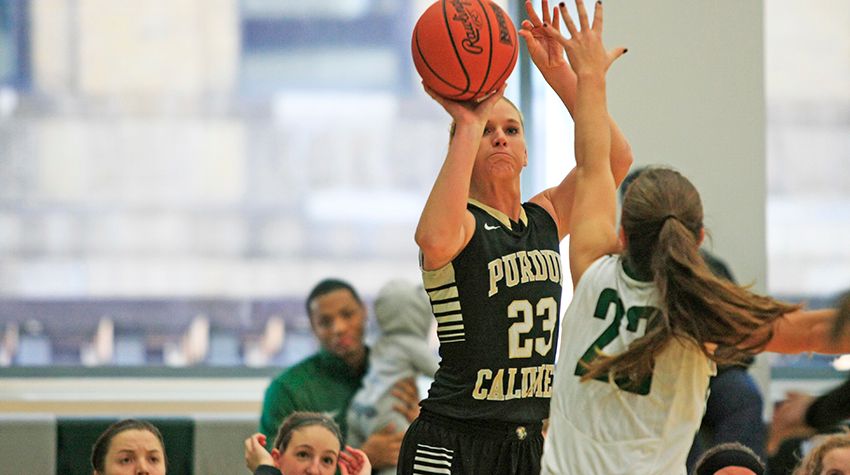 Three Peregrine players reached the 20-point mark, led by junior guard Dariyan Morris (Merrillville, Ind./Merrillville), who pumped in 25 points on 8-of-17 shooting to go along with four assists. The 25-point effort was one shy of her career best. Junior Cassidy Deno (Otterbein, Ind./Benton Central) and senior Jada Buggs (Elkhart, Ind./Elkhart Memorial) added 22 points each and both had double-doubles, with Deno pulling down a career-high 13 rebounds and Buggs snagging 11 boards to go with seven assists.

Sophomore Katie Wampler (Scottsburg, Ind./Scottsburg) also hit the double-digit mark in rebounds with 11 while adding give points and two blocks.

The Peregrines jumped out to an early nine-point lead to start the game, as Purdue Calumet came out of the gate with a 14-6 lead. But Roosevelt’s Becky Williford’s 3-point shooting prowess helped the Lakers get back in the game, as the senior guard drained 4-of-4 triples in the first quarter to score 17 points and send the host into the second frame tied at 24-all. Purdue Calumet regained control in the second quarter scoring both inside and out, as the Peregrines hit 7-of-12 3-pointer in the first half. Morris and Deno led the charge with three 3-pointer apiece in the first half, while junior Darien Thompson (Anderson, Ind./Anderson) added one.

After Buggs found Ellie Michalski (Mukwonago, Wis./Mukwonago) inside for a layup with seconds remaining in the second, Roosevelt’s Becca Bergman made the Peregrines pay for leaving time on the clock with a deep 3 that banked in the buzzer as Purdue Calumet took a 47-35 lead into halftime.

Purdue Calumet used a steady inside game led by Buggs, who finished 10-of-19 from the field, to hold a 63-54 heading into the fourth quarter.

But the Lakers had one last run in them, as Roosevelt erased a 12-point deficit using a 8-0 over a span of 2:35 to cut Purdue Calumet’s lead to just four, 68-64, with five minutes to play. Deno hit a key triple at the 4:00-minute mark to stall the run, and the Peregrines went back to their inside game with two buckets by Wampler and Buggs to extend the lead back to double-digits with two minutes left.

Thompson finished with six points, five assists and three rebounds for the Peregrines in the win, their fourth straight.

Paige Gallimore led Roosevelt with 20 points and Williford had a quiet second half, finishing the game with 18 points after her 17-point outburst in the first quarter.

For the 13th time this season, junior guard LaBradford Sebree (Kokomo, Ind./Kokomo) recorded at least 20 points, headliningall scorers with 26 points on 8-of-16 shooting.

The Peregrines took an early 7-2 lead to start off the contest thanks to five points from Sebree, but the Lakers would take their first lead of the game, after a Jake Ludwig jumper made it 10-9 with 11:15 left in the first half.

A Rader layup followed by a three-point field goal from Spring later in the period helped the Black and Gold regain the lead, taking a 16-13 advantage with just under nine minutes remaining in the half.

The Lakers would continue to answer back, taking a 33-27 lead heading in to the break.

Roosevelt would keep a double-digit lead for most of the second period, but with 9:28 left in the game, Max Clifford (Franklin, Ind./Roncalli) would connect from beyond the arc to put the Peregrines within six, 49-43.

The Lakers would halt any comeback efforts for the reminder of the game to come away with the 68-56 victory.

Roosevelt was led by Jake Ludwig, who scored a team-high 23 points and five assists while Zack Harris recorded 12 points and grabbed eight rebounds.

The Peregrines return to action Monday, Feb. 1, when they face Great Lakes Christian College in a make-up contest after their originally scheduled meeting on Jan. 18 was cancelled due to weather. Tip-off Is set for 7 p.m. at the Fitness and Recreation Center.