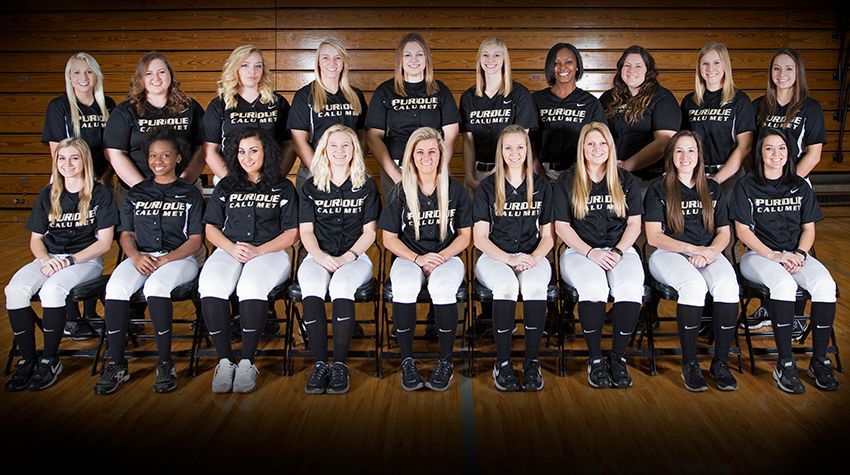 The Purdue University Calumet softball team will kick off its season Friday, Feb. 19, when the Peregrines travel to Saint Catharine, Ky., to take on Saint Catharine College.

The Peregrines (0-0) will take on the Patriots (0-0) in a doubleheader beginning at 12:00 p.m. (CT). Purdue Calumet's originally scheduled Saturday twinbill at Asbury University, has been canceled due to poor field conditions.

“With a lot of new talent and seven returners coming back, we’re very excited to get the season started on Friday,” third-year Head Coach Heather Tarter said.

SCHEDULE HIGHLIGHTS
Following this weekend’s opening contests with Saint Catharine and Asbury, the Black and Gold will travel South for the NTC Invite, which runs from Mar. 6-10 in Leesburg and Lakeland Fla.

When they return from Florida, the Peregrines will play their first home contest of the year March 20 against Viterbo University at Fifth Third Bank Field at Dowling Park.

Purdue Calumet will begin Chicagoland Collegiate Athletic Conference play on Mar. 29, when it hosts Judson University in a doubleheader. The Peregrines have 12 doubleheader contests scheduled with CCAC opponents, a year after going 13-9 in conference play last season to go along with a pair of upset wins in the CCAC Tournament.

Rounding out the returning players are Holly Pagan (Bartlett, Ill./Bartlett) and Allyson Leach (Demotte, Ind.) Pagan, who pitched in five games with two starts last season, also hit for a .273 average with nine RBI and four runs scored. Leach played in 17 games during her sophomore season, bringing in three runs and scoring five.

KEY ADDITIONS
The Black and Gold bring in six freshmen along with six transfer students to help round out the Peregrines lineup.

Tessa Steffens (Litchfield, Ill./Litchfield) enters her first season with the Peregrines after batting .488 in her senior season with the Purple Panthers. Steffens led Litchfield to a 2A regional championship in her sophomore season, while receiving first-team all conference and second team all-state accolades.

Other transfer players include Hannah Lopez (Granada Hills, Calif./Bishop Alemany) and Brianna Hall (University Park, Ill./Marian Catholic). Lopez and Hall were members of the Lake Land team with Murphy which won the Great Rivers Athletic Conference title. Lopez hit for a .265 average in her sophomore season with eight RBI and five runs scored while Hall played in 70 games during her two seasons with the Lakers.

Kimmy Cordy (Youngstown, Ohio/ Liberty) and Kaitlin Barajas (Dyer, Ind./Andrean) round out the incoming transfers for the Black and Gold, and will look to improve the Peregrine squad both offensively and defensively.