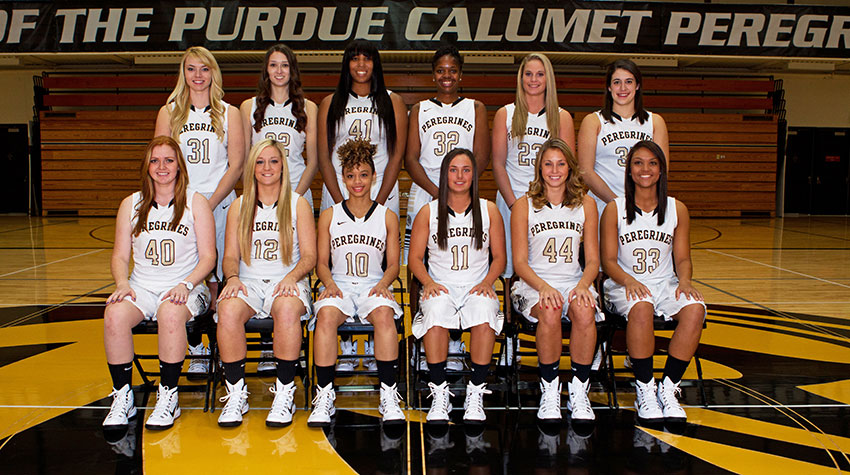 The Purdue University Calumet 2014-15 women’s basketball team was honored as one of the Top 25 squads in the NAIA with its selection on the Women’s Basketball Coaches Association Academic Top 25 Honor Roll.

The honor marks the first in Peregrine women’s basketball history.

The Peregrines compiled a team grade point average of 3.244 to land the No. 23 spot on the list, which featured four other teams from the Chicagoland Collegiate Athletic Conference, including Cardinal Stritch, St. Xavier, St. Francis (Ill.), and Indiana South Bend.

Purdue Calumet had a stellar season on both the court and the classroom, as the Peregrines captured their fourth-straight 20-win season under eighth-year head coach Tom Megyesi. Purdue Calumet finished with an overall record of 21-8 and went 12-5 in CCAC play, capturing their second-straight South Division Title. The Peregrines also reached their highest-ever national ranking, climbing as high as No. 8 in the NAIA Coaches’ Top 25 Poll during the year.

The WBCA Academic Top 25 presented by AT&T annually recognizes NCAA Division I, II, and III; NAIA; and junior/community college women’s basketball teams across the nation that carry the highest combined grade point average (GPA) inclusive of all student-athletes on their rosters for the entire season. The 2014-15 season is the 20th in which the WBCA has complied the honor rolls. A team’s GPA is calculated by dividing the total number of quality points earned by the total number of hours attempted by all team members in the academic terms (semesters or quarters) that the season spans. Weighted grades are converted to a 4.0 scale. The GPA’s are rounded to the nearest thousandth of a point. Teams are nominated for the honor by a WBCA-member head coach. A team must have a 3.000 or better GPA to be nominated.