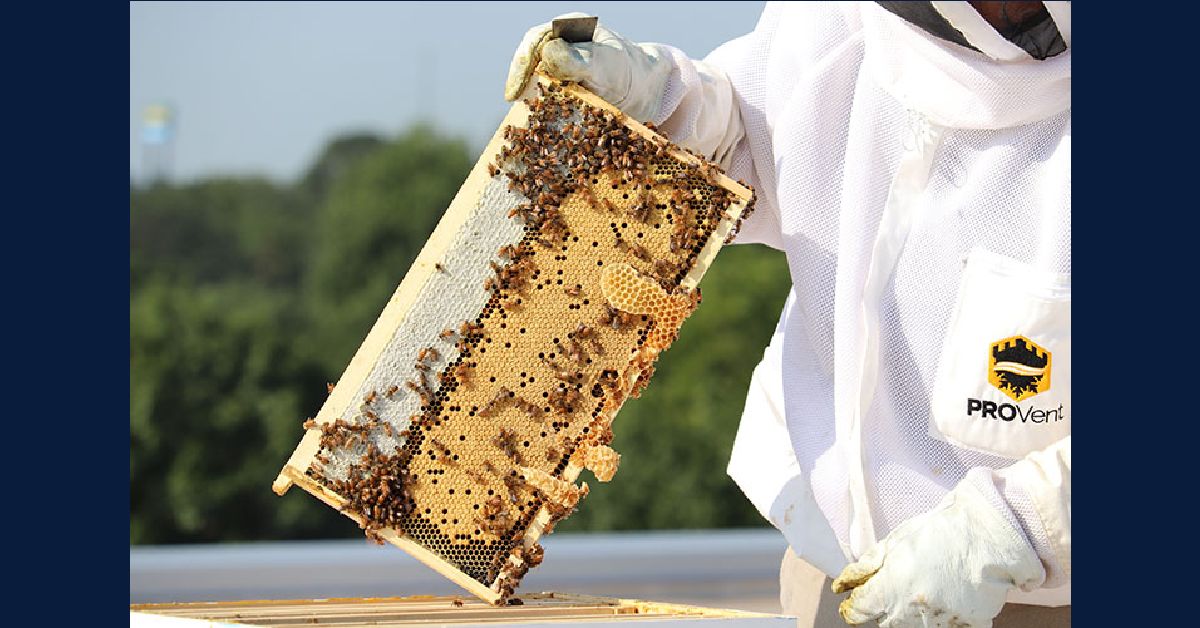 The latest buzz from Purdue University Northwest (PNW) is the 650 pounds of honey harvested from the apiaries on the Hammond and Westville campuses and at Gabis Arboretum at Purdue Northwest.

This year’s honey yield, which tripled last year’s harvest, stands at 480 pounds with an additional 170 pounds expected in the final harvest over the next few weeks.

“We did amazing this year,” says John Bachmann, grounds and landscape manager at PNW. “We waited until August to do the first pull, which was double our entire output from last year. Beekeepers typically do a spring harvest, however, we didn’t this year because we were looking to grow our hives. While we had a few more hives this year we also had some challenges.”

This past spring, Bachmann discovered that three of the original eight hives failed over the winter. “We were fortunate that four of the hives on the Hammond campus wintered well and we were able to split those hives to create new colonies.” The split colonies helped the total number of PNW apiaries grow to eleven across the three locations.

The honeybee hives, introduced to the PNW community in spring 2021, produced 200 pounds of honey in the first harvest and saw the launch of the “Pride Gold” brand.

Students from PNW’s Honors College will be helping to bottle and label this year’s harvested honey.

The next step after the final honey harvest will be to ensure the hives are winter-ready. Bachmann, along with Nicky Jones, owner of Earthling Bee Company, will start by removing the empty supers from each of the hives. While the bee colonies have already stored honey and pollen for use during the winter, Bachmann and Jones will make sure the bees have enough food for the cold months ahead. Once the tops have been placed on the hives, the apiaries are wrapped with roofing paper, the hive entrances will be reduced and bee food will be added on top of the hives.

When the temperature drops below 50 degrees, the worker bees will form a winter cluster by gathering into a ball in the middle of the hive surrounding the queen and her brood. As the worker bees squeeze together they will rapidly vibrate their muscles to keep the hive at a balmy 95 degrees throughout the winter.

Bachmann is hopeful that all eleven hives will survive the winter. As for predictions on next year’s honey harvest, he remains optimistic. “If all the hives produce, I don’t see why we couldn’t double this year’s harvest yield,” says Bachmann.

As part of the university’s efforts to benefit sustainability and create a green environment, the bee project helps bring urban agriculture to the forefront on the campuses and in the surrounding communities.

Bees are vital to pollination, which in turn is instrumental to the agricultural economy. Pollination helps maintain genetic diversity, productivity of ecosystems and a greater variety of crops.

“Our campuses have many different species of trees, plants, and flowers,” says Bachmann. “Having bees will not only have a dramatic effect on how they produce but will help ensure their longevity for years to come.”