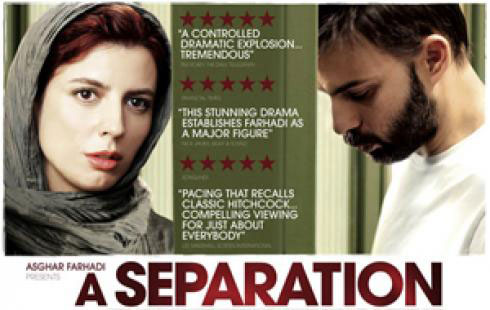 Public showings of the film "A Separation" will be offered through a collaboration between the Purdue University North Central Odyssey Arts and Cultural Events Series and the Michigan City Public Library. The showings are free and open to the public.

The film will be shown on Sunday, Oct. 21 at 2 p.m. at the Michigan City Public Library, 100 E. Fourth St.; and on Thursday, Oct. 25 at 5 p.m. at PNC in the Library-Student-Faculty Building Assembly Hall, Room 02. Free popcorn will be available at PNC. Movie goers are welcome to bring a beverage or purchase one from the nearby PNC bookstore. The film is rated PG-13 for mature content. It is in Persian with English subtitles.

"A Separation" earned four stars from Roger Ebert and from "USA Today." Set in today's Iran, viewers are drawn into a movie that the "Los Angeles Times" describes as having Alfred Hitchcock's intricate attention to plot joined to the devastating emotional impact of Ingmar Bergman. The result is so exhilarating."

Iran, as depicted in the film, is a modern country coping with Islamic law. The central characters are a married couple who have come to an impasse. While they agree to move abroad for the sake of their 11-year-old daughter, the husband feels duty-bound to stay to care for his elderly father. While they do not want to divorce, the wife moves to her mother's apartment. A series of unfortunate, gut-wrenching, soul-searching moments follow as the couple is plunged into the Iranian judicial system, religious customs, cultural and class mores.

"A Separation" does not take sides and becomes a thriller, "naturally suspenseful in the way of the most universally engaging and deeply humanistic stories," said Ebert.

The Odyssey Arts and Cultural Events Series continues throughout the year. A complete schedule can be found at www.pnc.edu/odyssey. For information about this film or the Odyssey series, contact Judy Jacobi, PNC assistant vice chancellor of Marketing and Campus Relations, at 219.785.5200 ext. 5593. Persons with disabilities requiring accommodations should contact Jacobi.