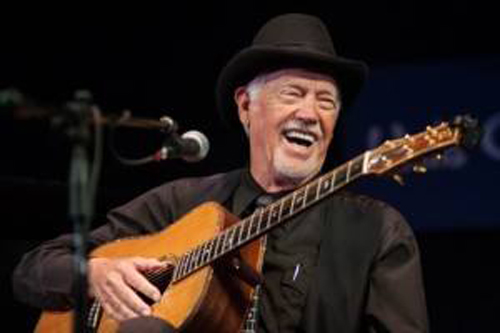 Cox, who performed in the famous dueling banjo scene in the movie "Deliverance," has turned his focus to music. He will appear at the Lubeznik Center for the Arts in Michigan City on Wednesday, April 9 at 7p.m.

During his visit to PNC, Cox will discuss the making of 1972 movie "Deliverance." The film's stars Burt Reynolds, Jon Voight, Ned Beatty and Cox really went down the roaring North Georgia river that provides the film's backdrop. Performing their own stunts and without computer graphics, Reynolds was thrown from a canoe and nearly broke his back in one sequence that is clearly seen in the film. In another scene, Voight nearly fell to his death trying to scale a sheer cliff, which is also shown in the film. Director John Boorman was determined to make this movie so real that the audience could taste it. He shot with a skeleton crew and the actors used no doubles. There was, however, friction of another kind: author James Dickey, who appears at the end of the movie as the suspicious sheriff, was kicked off the movie set for his behavior. There are many stories to tell. All four stars are deeply proud of their work on "Deliverance" a film they risked their lives to make.

The class is taught by Dr. Jerry Holt, PNC assistant professor of English and interim department chair. Last fall, Holt asked Cox to speak to his "Narrative Fiction" class. Holt explained that the class read the James Dickey novel "Deliverance," which Dickey wrote the screenplay for that as well. Holt decided to reach out to Cox to see if he would speak to the class. Holt's classes have enjoyed visits by a number of authors through Skype, the telephone or in person.

After contacting Cox through Facebook, Holt asked if he would speak to the class via Skype or telephone to the class. "He chose telephone," said Holt. "He proceeded to absolutely mesmerize a packed class for an hour and a half. I have met many film personalities in my life: I was on Film Commissions in both Oklahoma and Ohio. I have never met anyone in the business who is as gracious and warmly human as Ronny Cox."

Others who have visited Holt's classes include John Hancock, director of the film "Prancer"; Kristen Iversen, author of "Full Body Burden"; Susan Orlean, author of "Rin Tin Rin--A Biography"; Candice Millard, author of "Destiny of the Republic and Sean Aiken, author of "The One-Week Job."

Holt noted that he offers an honorarium to the speakers and while most do not accept it, those who did gave it to charity. Iversen, Orlean and Millard had books on the best-seller list when they visited his class and Holt said, "They have all been incredibly generous. Iversen still communicates with members of the class. I am very proud of this enterprise -- my classes were prepared and engaged and presently themselves wonderfully. Because of them, these artists are in turn very impressed with the name Purdue."

When Holt learned that Cox also toured with a band, he contacted the Lubeznik Center to see if there was any interest in booking him as a performer. The result was that PNC and the Center for the Arts are co-sponsoring his April 9 performance at the Lubeznik Center and visiting Holt's class the day before.

Cox has been featured in more than125 films and television shows that include films such as "Beverly Hills," "Total Recall" and "RoboCop." His television career includes appearances in "Stargate" and two episodes as the captain of the ship on "Star Trek: The Next Generation." Although he is best known for his acting career, Cox has been playing music and writing stories for more than four decades.

His first album self-titled, "Ronny Cox" with Mercury Records in Nashville debuted in 1993. He released several albums since then. His most recent album, "Songs...with Repercussions" was influenced by the death of his wife, Mary, whom he had met at age 14. He confesses on his website that he dealt with the loss of his wife through music. The album hit the number 1 spot of the Folk DJ list in the summer of 2009. Cox explained, "I have found that if I open up to my audience, they not only accept that, they also help me get through it. It is that sharing . . . of silliness, or sadness . . . or mutual understanding that I find to be very compelling."