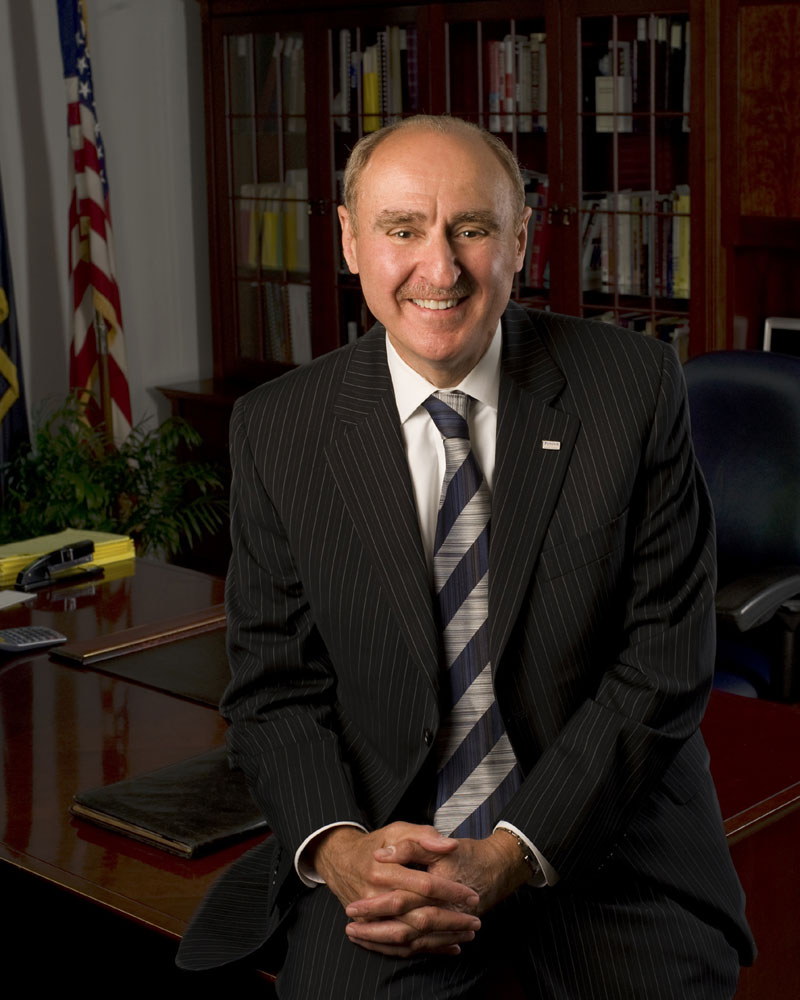 Purdue University North Central Chancellor Dr. James B. Dworkin was presented with the Purdue Alumni Association Special Boilermaker Award during a recent ceremony in West Lafayette. The award honors a member of the Purdue faculty or staff who has contributed significantly to the improvement of the quality of life and/or the betterment of the educational experience for a substantial number of Purdue students.

Dworkin was nominated for the honor by Stephen R. Turner, vice chancellor for Finance & Administration for Purdue North Central and Purdue University Calumet.

Dworkin joined Purdue University as a faculty member in 1976. He served as an assistant dean, associate dean and interim dean for the Purdue Krannert School of Management prior to becoming the PNC chancellor in January, 2000.

“Chancellor Dworkin has made a significant impact at Purdue North Central that will be felt for years and years,” said Turner in his nomination. “He is a strong proponent for higher education.”

When Dworkin became chancellor, PNC had 3,459 students in the 2000-01 fall semester. In comparison, 6,177 students enrolled for the 2014 fall semester. In addition, PNC grew from offering six baccalaureate programs in 2000, to the 24 offered today.

“By giving residents a wider variety of programs, Dr. Dworkin believes PNC can meet the needs of the residents of Northwest Indiana,” noted Turner’s nomination. “The reputation of the campus has grown throughout the region and it is recognized as providing a quality education. “

Dworkin has shown a commitment to creating opportunities for student access and success on all levels. For example, he was the driving force behind the PNC College Bound program for qualifying students in Michigan City, La Porte and Portage. This program, supported by donations from local businesses and industries, works with students from eighth grade through high school to direct them to higher education at any institution.

These students are often the first in their families to attend college and most are low income. Those who complete the program and enroll at PNC receive full tuition assistance. To date, 518 students have gone through this program and 35 are enrolled at PNC. The first PNC College Bound student to earn a PNC degree will graduate in December, 2014.

As chancellor, Dworkin has been instrumental in the growth of service learning opportunities for PNC students. He served on the board of Campus Compact, a national service learning and civic engagement organization and was Chairman of the Board for the past three years.

In the community, he is a member of the boards of directors for the Northwest Indiana Forum, One Region: Improving the Quality of Life in Northwest Indiana, Horizon Bank, IU Health LaPorte Hospital, LaPorte County Economic Development Alliance, Indiana Association of United Ways and Shirley Heinze Land Trust Advisory Council. He led search committees for various school superintendents in the PNC service area.

He is part of the Purdue University Executive Policy Review Committee and the Human Resources Governance Council. In addition, he is a Peer Reviewer for the Higher Learning Commission and is a Law School Accreditation Reviewer for the American Bar Association.

Dworkin enjoys promoting the area’s economic development possibilities and was instrumental in getting the mayors of Michigan City and LaPorte to work together with local economic development corporations and with LaPorte County officials to sign the first “Economic Development Alliance.”

Purdue North Central will break ground for its Student Services and Activities Complex on Oct. 16. Dworkin has been the driving force behind making that building a reality. He worked behind the scenes to help convince the Indiana General Assembly of its need, which resulted in its gaining state funding in 2009. He led the local fundraising campaign that raised $3.7 million in private donations for the building.

In addition, he has personally contributed to PNC and established a scholarship endowment in the name of his family.

Today he plays a principle role in the unification of Purdue University Calumet and Purdue North Central. This unification will form one united institution with two distinct campuses. Dworkin, with Chancellor Thomas Keon of Purdue Calumet, co-chair the Unification Committee with membership from both campuses.

His work has brought a number of awards, including the Sagamore of the Wabash, the highest honor bestowed by the State of Indiana. He also earned the 2013 Ned E. Kalb Leadership Award, given by the Purdue Extension Office of La Porte County and Leadership La Porte County, the 2013 Paul Alinsky Award from the Michigan City Rotary Club, the 2012 Outstanding Community Leader given by the Northwest Indiana Business Quarterly Magazine, the Luminary Award for Outstanding Educator from the Northern Indiana Public Service Company (NIPSCO) and the Castaldi Award given by the Indiana Association of United Ways.

“Dr. Dworkin is personable, approachable and knowledgeable. He leads by example and his strong leadership qualities make him an excellent role model for PNC employees and the citizens of this region,” concluded Turner’s nomination.